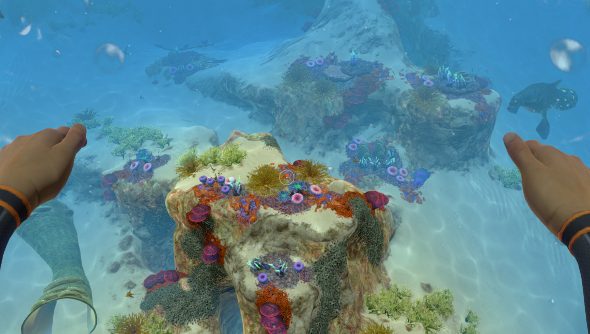 I was meant to be at work, doing my bit to colonise new worlds. Nah, I thought, I need a holiday at sea. Conveniently, this was around the same time that my ship crashed and left me stranded in a pod in the middle of an ocean. Hooray!

With my thoughts full of singing Jamaican crabs and fancy cocktails with names like “Sea Breeze”, I began my holiday in underwater survival romp, Subnautica. The genre’s very much trendy at the moment, maybe even a bit oversaturated, but Unknown Worlds has surprised me once before, with Natural Selection 2, and I was eager to take the plunge. 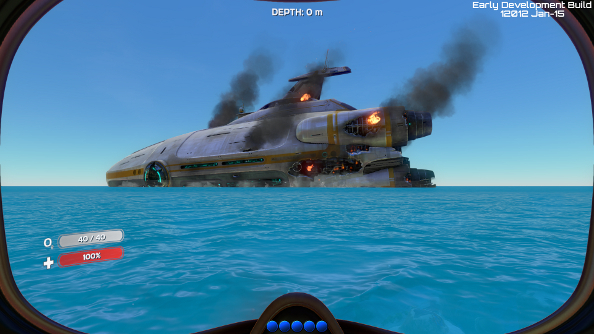 Survival games tend to be a wee bit stressful. DRINK. EAT. FIND SHELTER. DON’T LET THAT MONSTER EAT YOUR FACE. Warnings, everywhere, reminding you that you are only ever moments away from some terrible end. It’s all bloody exhausting. Subnautica seems to buck this trend.

These systems, hunger, thirst, they exist in Subnautica, but they take a backseat to exploration of the stunning underwater world. And they’re optional, too. There’s a freedom mode as well as a hardcore survival one, which focuses entirely on all the lovely stuff, like building fancy submarines and meeting new fishy friends.

Upon crash landing in survival mode, thirst and hunger levels are already depleted, but unlike, say, DayZ, the sea is bountiful with wee fish darting around, waiting to become dinner. The escape pod has a fabricator, which transforms multiple items into something handy. My first meal consisted of a rather cute fish with a giant eye and some salt which, when combined, made my belly nice and full. 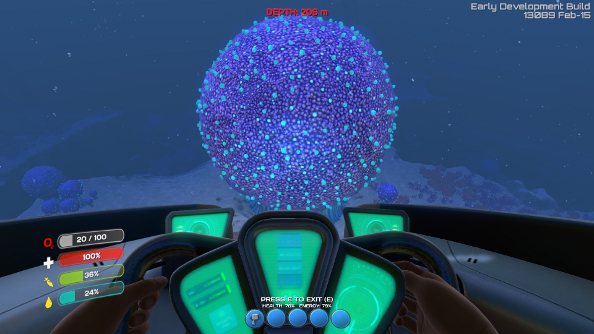 It’s really oxygen, rather than a rumbling stomach and a parched throat, that limit exploration. During those first outings into the damp expanse, it only takes a minute for oxygen levels to become perilously depleted, necessitating a frantic swim back up to the surface before suffocation claims another victim.

Even that, though, is merely a temporary setback. Crafting materials are scattered all across the sea bed, and it doesn’t take much to fill the inventory with air pipes and oxygen tanks. The former are handy little things that can be linked up, creating a network travelling from the surface, down into the depths. Wrap your mouth around one end, and you can enjoy a lungful of wonderful air.

The speed at which important materials can be found and morphed into extremely handy items is rather surprising. Even in survivor mode, within about 30 minutes I had absolutely nothing to worry about. My locker was full of fish – and gosh it stank – and my inventory contained flippers, multiple oxygen tanks, a knife and a torch. With every expedition, I was able to go further out, and stay down for longer. 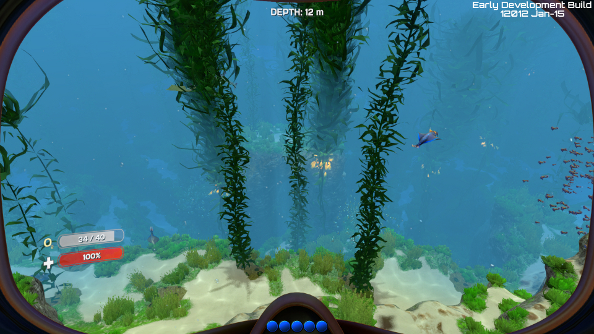 It rapidly stopped feeling like a survival game. That’s not to say that new threats don’t crop up. There’s the pressure of the depths to worry about, and aquatic beasties that don’t take kindly to strangers. The environment itself can be a bit deadly, too. Plumes of fire and smoke erupt out of holes in the ground, and networks of maze-like caves can trap unwary divers, leaving them with no way out when breathing becomes difficult.

That sense of danger was rare, though. I was more a tourist than a struggling survivor. But that meant that I could freely explore the remarkable alien world. That’s Subnautica’s real strength: the gorgeous underwater realm that begs to be investigated.

Mushroom forests, dark caves that suddenly glow with magma, fields of kelp that elegantly sway with the underwater tides – there’s just so much to see. And there are really two worlds, because when the sun goes down, everything is dramatically transformed, with strange alien flora lighting up the depths. 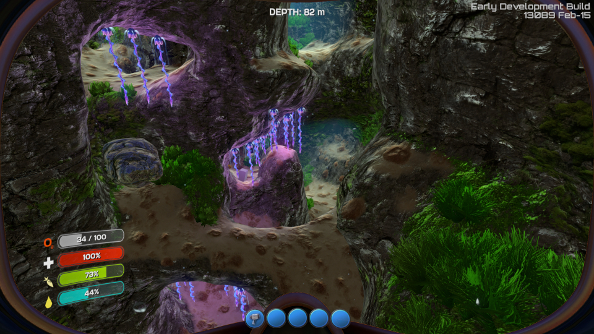 A lucky discovery of a large amount of copper allowed me to construct a wee submarine, making travel a complete doddle. But as I sped through a bizarre ocean forest filled with bulbous purple plants, I realised that I had run out of goals. In a matter of hours I had built so much, from observatories to convenient sci-fi gizmos, and I started to miss the struggle and tension that permeates throughout most survival games.

What Subnautica is, right now, is a stunning game that’s a delight to explore. It can be a refreshing change of pace, especially in a genre that’s usually so damn challenging. It’s a relaxing holiday. But I don’t find myself being called back to it. I want to do something. I don’t want to be told what to do, but I do want there to be some sort of objective that I can work toward now that I’ve exhausted the limits of my fabricator, and explored so much of the seabed.

That will no doubt come, of course. And Unknown Worlds has already updated the game with another submarine, a much more impressive one that acts like a mobile base, so there is something new to play with today. But I think I’ll wait until there’s a bit more meat on these undeniably lovely bones. I expect this to be sooner rather than later, though, because Subnautica has grown quite a bit in a very short space of time.