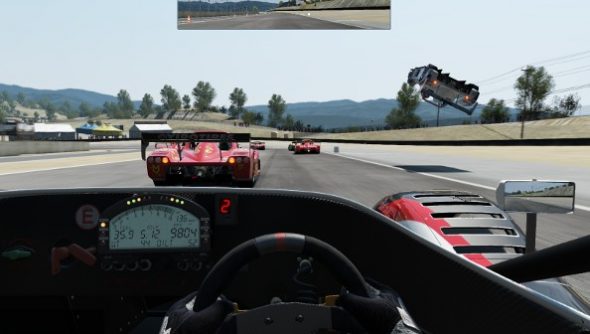 Project CARS is one of the most exciting projects in racing games, which is probably why I’m so antsy about it. The crowd-funded, community driven sim racer is an all-things-to-all-people kind of game, PC gaming’s best chance at having its own answer to the Forza and Gran Turismo series on consoles.

Kart racing? CARS has it. Le Mans Prototypes? Those too. Street-legal supercars? Definitely. F1 cars from three different eras? You better believe it. And you can race them all on the world’s greatest tracks, from Laguna Seca in California to Monza in Italy, albeit on unlicensed versions of those tracks. If tracks aren’t your thing, no problem: hop in a car and drive France’s Cote d’Azur or California’s State Route 1 along the coast.

While developer Slightly Mad Studios (who did the Need for Speed: Shift series) have promised that there will be a career mode that takes players from the lowest rungs of autosport to the highest peaks of professional achievement, that’s mostly speculative at this point. What you can do with Project CARS, if you become a backer (10 € gets you in), is play around with the pieces. And what pieces they are. Many of these tracks and cars are just stunningly beautiful and exciting. Slighty Mad have been free to run through racing and grab the best of the best, which means underused masterpieces like New York’s Watkins Glen as well as perennial classics like Spa. Better still, each track becomes a wildly different experience depending on what you’re driving: a tame open-cockpit racer like the L4-RS around Spa is as forgiving as a leisurely drive through the country for as long as the tires hold out, while the Formula A (CARS version of an F1 car) requires acts of faith every lap as you trust the car’s limits to whisk you through one seemingly reckless turn after another.

Both pale next to the Lotus 49, Jim Clark’s last F1 car and Graham Hill’s championship-winning drive. It’s all power and no downforce, a savagely thrilling driving experience that makes any other car feel like watered-down green tea. It brought back welcome flashbacks to Grand Prix Legends. You simply point it like an arrow and try to maintain control, knowing that even slight mistakes will send the car rocketing off the track and into the nearest wall.

On the other hand, Slightly Mad got a reputation with NFS: Shift for ridiculously punishing car handling models, to the point where they were almost comically undriveable, and some of that seems to be afflicting particular car models. Paganis, for instance, are uniformly afflicted with a bad torque-shimmy on acceleration: simply putting your foot firmly on the gas will snap the car into a spin. BMW Z4s somehow feel hard to handle, and yet also ungainly and sluggish.

Project CARS is a work-in-progress, of course. But these issues indicates another challenge Slightly Mad face: this game is stretched across so many different types of vehicles and racing that it seems almost impossible to cover them all well. When you have Formula 1 cars and Prototype-classes racing around Grand Prix circuits, can a BMW Z4 be anything but glacial in comparison? Will Karting be interesting as anything more than a sideshow? With a handling model suited for demanding, professional-level racing, it might be hard to make allowances for more forgiving, casual sorts of racing. It’s a problem sims of every stripe have struggled with: while player aids can reduce the difficulty for less experienced and skilled players, they also take away from immersion that makes sims so appealing. It’s a tough balance to strike: if I’m doing a point-to-point race down the California coast in an Italian sports car, I don’t want something as intense and unforgiving as driving around the Nurburgring in a race car.

CARS includes cars and racing modes that will appeal to a maddeningly diverse audience. Somehow it has to contain all these different experiences in a single package. Console racers have traditionally bridged the divide by compromising realism rather significantly, but that’s clearly not the game Slightly Mad are making. Nor should it be. But it poses a challenge.

Unsurprisingly, the racing AI is nowhere near ready yet. While the AI drivers can hold a racing line when left to their own devices, they have a kamikaze streak. They drive straight up your tail-pipe if you get on the brakes in front of them, and they’ll blithely throw you or anyone else into the guardrail if you’re between them and their preferred line. If nothing else, this gives you a chance to admire CARS’ excellent graphics as priceless racing machines go vaulting through the air and dissolve into snow-showers of carbon fiber shrapnel, although some of the physics are so overdone that they remind me of early Havok.

That’s a worry for later, although some of the tensions is right there in the handling models. But I can overlook that for now, in part because CARS has some of the best atmosphere I’ve seen in a racing game. Slightly Mad have made their weather and day-night cycles a point of pride, and with good reason: the changing light and weather effects can create an uncanny sense of presence. It’s mesmerizing during races set at dawn and dusk. My favorite place to experience it is Watkins Glen (Connecticut Hill in CARS), which is centered on a hill and whose two ends are at low elevations. A dawn race is simply dazzling as you dive into a dark valleys of night, then charge up onto the hilltop where its a brilliant morning. The rapid shifts in light, and the way the trees cause the rising sun to strobe as you hurtle uphill, is disorienting and achingly lovely. With a barely-disguised Circuit de le Sarthe (Le Mans) in the mix, and Le Mans protypes ready for racing, it easy to envision Project CARS being the best endurance-racing game ever made.

That’s the thing about Project CARS: it’s all potential. There’s so much it could be, so much that it promises to be, that anyone who plays it can see their ideal racing game. But I have to admit that when I see all the promises Slightly Mad have made, from a complete multiplatform release to a veritable smorgasboard of racing modes and features, I get a little nervous, too. Game development is about hard choices, which often means breaking promises. Project CARS speaks to so many different constituencies that I’m still not sure I see the game behind the car models and open-track practices.

To be clear, I’m pretty happy with that part of it so far. That’s the soul of a racing game: if a single car on an empty track isn’t fun, the whole thing is wasted. But I’m still nervous and excited about what comes next.