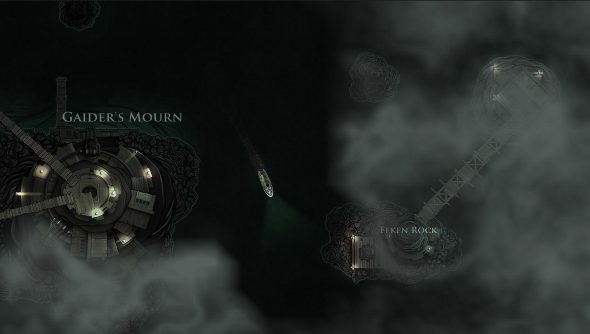 Sunless Sea, Failbetter Games’ Lovecraftian sailing game set in the world of their brilliant text adventure, Fallen London, finally has a release date. It will be weighing anchor on February 6, and leaving the harbor of Early Access of the open, madness-filled waters of the Unterzee.

However, there are still some compelling reasons to nab it on Early Access before it formally releases.

One of my favorite midday distractions is Fallen London, Failbetter Games’ brilliantly-written and uniquely oddball text adventure set in an underground version of Victorian London. It’s a world that I love to spend time in, and often I’ll find myself saving passages of text just to soak up the atmosphere a bit longer. That’s why I’m so excited to try Sunless Sea, especially now that Fraser has given it his whisky stain of approval.

In a post announcing the February 6 release date, Failbetter note that the final game includes over 200,000 words of text, which basically means there’s a Moby-Dick’s worth writing in there. That alone is enough to get me to climb aboard: Failbetter’s intoxicating mix of Rudyard Kipling and Terry Pratchett by way of G.K. Chesterton is some of the most distinctive and strongest writing in games, and the world of the Neath is brilliantly imagined.

Not only will Sunless Sea be leaving Early Access on February 6, but it will also be on GOG immediately, if that’s your preferred digital store. However, you might not want to wait until launch, since Failbetter have ALSO promised that Early Access purchasers are “guaranteed to receive all game expansions and story DLC for FREE.”

That’s quite the pot-sweetener. Think of all the misfortune and madness that you’ll be entitled to later!