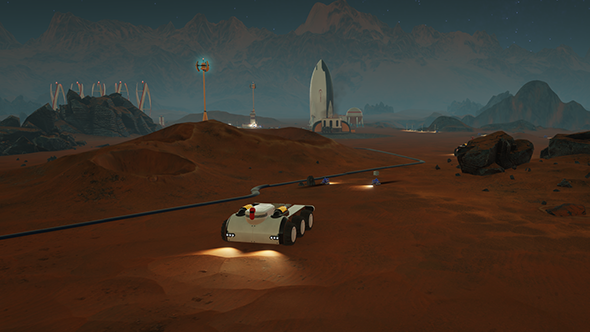 Haemimont Games wants the science in its city builder, Surviving Mars, to be plausible. It’s been one of the biggest challenges of the game according to the studio’s CEO, Gabriel Dobrev. “The sheer complexity of the game and the fact we want to stay as much as possible in the realms of reality creates problems,” he tells us.

For another take on city builders, Anno 1800 has full-blown riots.

One example of these challenges Dobrev gives is the game’s drone workforce. As your colony expands, you’ll build up a small army of constructor robots that weave around your base, maintaining and operating machinery. “We were going to make the drones flying because that was easier for collision,” Dobrev recalls, “but I was like ‘No, we can’t make them flying because that’s very unlikely to happen’. It’s possible but it’s very unlikely.

“Yes, if you have a lot of advanced technology maybe one day it will happen but definitely the first drones will not,” Dobrev adds. “We did a lot of things like that everywhere we constrained ourselves because of how things would be.”

It’s clear that Haemimont Games are determined to stick to the rules of real science, then. However, this commitment has its limits, as they have also poured plenty of science fiction into Surviving Mars’ late game. As your colony expands you can come across ‘Mysteries’. When you do, odd things can start happening on your Mars base. Dobrev wouldn’t go into much detail about what peculiarities can occur, but he did explain why the studio’s otherwise science-based game featured what amount to be very unscientific storylines. 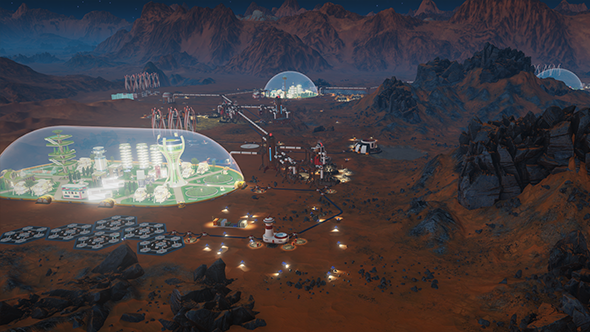 “We wanted to have those two aspects and they were kind of contradicting each other. You can’t do sci-fi and be plausible at the same time. So we settled on doing it like this: the core of the game is as plausible as we can keep it and then there are the mysteries. The mysteries are typically a little later in the game. With those we have no limits of what we can do.”

Dobrev knows some of his audience may not be happy with the blend, saying, “You can turn [the mysteries] off if you only want the plausible core, or you can select a specific mystery or go for a random one. These are simple stories, [with] a lot of interactions and many endings, and stuff that can happen.”

Dobrev keeps his lips tight when talking about what we might see when we push on into these mysteries:: “As the name suggests I don’t want to reveal anything about the mysteries.” However, he did talk about how the team was inspired by the sci-fi stories of the 60s and 70s, especially in how both periods imagined what the future would look like – “this retro-futuristic style that we re-imagined and cleaned up a little and made a little more functional. You won’t see any cables sticking out [of our drones].” He also mentions how those two decades had a grander view of humanity, with characters in the game reflecting this altruism, acting bravely on behalf of the human race rather than getting caught up in lesser human squabbles.

We did get a small concession out of Dobrev, though, as he says that “at some point we will say this mystery is inspired by [the] work of Asimov and this mystery is inspired by [the] work of Arthur C. Clarke, or something like that.” Still, it seems like a strange decision to throw a sci-fi-shaped spanner into the works of a city builder that is meant to be as close to predictable reality as possible. To that, Dobrev explains that there’s more to the mysteries than simply paying homage to sci-fi inspirations. 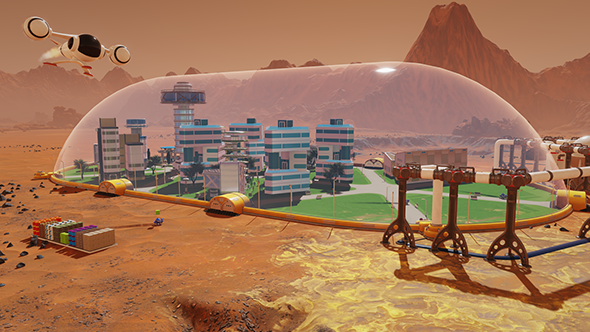 “[With mysteries] anything is possible and when it happens you just have to deal with it,” Dobrev says. Mysteries only appear once you have learned the systems and mechanics of Surviving Mars. They’re a way to force you to re-evaluate the game and bend its systems to your needs. “You’ll try things and sometimes you don’t know what the result will be. Like, ‘A mysterious object appears’ and then people say, ‘We can ignore it, build around it, or nuke it’. Maybe it will explode when you nuke it, or maybe it doesn’t. It’s kind of like that. It’s not so much mechanic-based. You don’t know what’s going to happen. Something happens and you’re like ‘Woah’.”

We’ve got our fingers crossed for a Forbidden Planet style of mystery that sees our moon base assaulted by an invisible creature conjured from the sleeping mind of a mad scientist. Or, you know, a 2001: A Space Odyssey-style rogue AI.