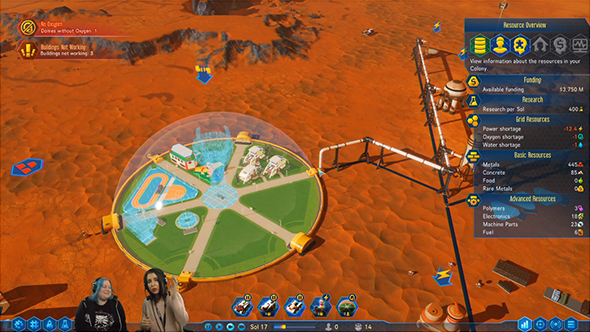 Surviving Mars is an upcoming city builder from Paradox set on the red planet. The game looks cool and all, but we’re not really here to talk about that. Instead, we need to discuss the absolutely bonkers livestream Paradox ran today.

Check out all the best sandbox games on PC.

If you wanted an hour of Surviving Mars footage from the stream, run by community manager Susie and producer Nikki, you certainly got that. But we also got so much more. The goal of this week’s stream was apparently to get the colonists making babies in record time. There is, of course, plenty of downtime in a city builder, so our hosts filled that time as best they could.

Conversation topics included such varied things as The Handmaid’s Tale and flat-earthers. Somewhere along the way, Nikki suggested the community build a “50 Shades of Drones” mod filled with bondage robots. At one point, Nikki turns to Susie and says “I have a really good question, but I’m not sure if I should ask it.” Of course, that hesitation lasts only for a short time. Imagine a situation where you’re tortured in a cellar, bound with chains, and your captors offered you a path to escape. You can, er, “do” either a baby cow or a baby human for freedom. What do you do?

Nikki offers the practical answer that she’d bite her tongue to kill herself, which immediately led into a discussion of the practicality of tongue-based suicide.

These are merely a few of the ‘high’lights of the stream, which you can check out in full below, starting at the 2:06:46 mark.

In a world full of tightly managed PR messaging, it’s as delightful as it is bizarre to see an official livestream go so thoroughly off the rails, and it seems we can continue to enjoy the further adventures of Nikki and Susie weekly until Surviving Mars’ release in spring 2018.