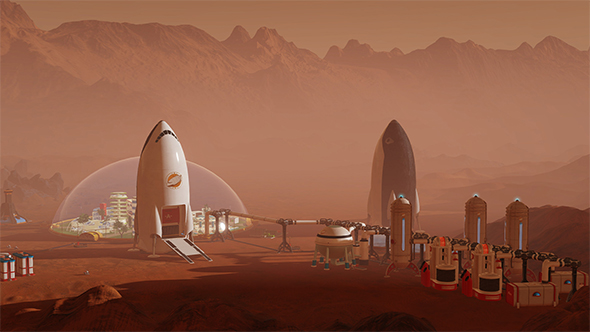 Paradox’s interplanetary city builder has finally landed on the red planet, and it’s time to start managing your colony while guiding the population to survival. Surviving Mars is out today, with the PC version including support for Windows, Mac, and Linux so you can play whichever OS you’re using. It’s also out on PlayStation 4 and Xbox One.

Need to get tactical? These are the best strategy games on PC.

Surviving Mars combines Martian survival (naturally) and sci-fi city building, letting you get into some Cities: Skylines-style management where the consequence for failure is death. That means managing life support and power systems, and taking care of the individually simulated colonists so you’re not suddenly afflicted with a rash of alcoholic doctors. Mars also hides some proper sci-fi secrets to keep your playthrough interesting.

The game was developed by Haemimont Games, who you may recognize as the folks behind the most recent handful of Tropico games. It’s already having a solid launch day, with over 20,000 players already in-game according to Steam Charts, and it looks like that number is continuing to rise.

If you want to start playing for yourself, Surviving Mars is now available on Steam for $39.99 / £34.99 / €39.99. If you want even more, you can spring for an upgrade to the extra content of the deluxe edition, or a season pass including “two full expansions and two content packs.”

Original story, February 1:We’ve had a decades-long tradition of terrestrial city builders, but it’s about time we had a few more options for constructing places to live on the final frontier. Luckily, Surviving Mars is set to provide just such an option, and it’ll be doing so quite soon. You’ll be able to build your red planet colonies starting in little over a month.

Surviving Mars will launch on March 15, available across Windows, Mac, Linux, and consoles. It’ll be $39.99 on all platforms, and Paradox say pre-orders will open later this month with goodies available to early purchasers.

A new trailer alongside the announcement showcases some of the mysterious that might be found on Mars. It’s also been confirmed that the game will launch on PC with full mod support with its own modding tools, and some creations from popular community creators will be available on release day.

Our recent hands-on time with Surviving Mars paints a very positive picture of the game’s take on Martian colonization. If you want to see more, you may want to check out Paradox’s in-house streams of the game, which have been a sight to behold.