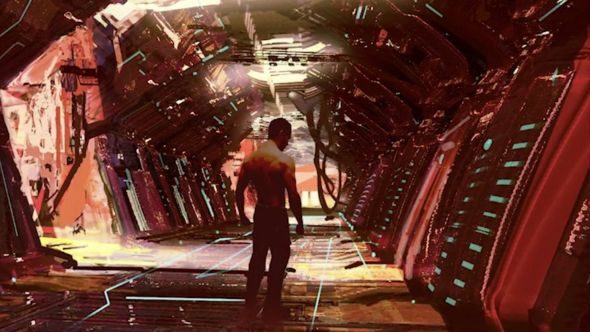 If you’ve lost track, Warren Spector is making System Shock 3. He’s doing it with the help of publishers Starbreeze, who held their Starstream event yesterday and brought the man himself on stage to talk about where the game is at. The answer is concepting, not yet entering pre-production, but he had a few intriguing things to say about his plans for the game.

For more on the most exciting upcoming PC games, check our regularly updated list.

Most notably, Spector talks a little about designing a sequel to a game that’s had so many spiritual successors. He says the he wants to avoid what others have done – good or bad – because, well, they’ve already done it. He wants to be different. Naturally, that means he’s aiming for the new.

“There’s at least one thing that’s pretty crazy, pretty insane,” he explains. “I have no idea if it’s going to work – but no-one’s ever seen or done it before, I’ll say that.”

No further teases were given, beyond a lot of very early concept art – the game itself is clearly still several years away. On the gameplay front, all he’ll say is that things will need to be significantly more complex in the simulation department, compared to 20 years ago.

For story, perhaps unsurprisingly, “SHODAN is coming back, we have to know what happened to her.” He also says there’s five characters that survived the first two games, plus Citadel Station was apparently destroyed in the first game “but maybe not so much – it will be coming back.”

You can see the full talk from 01:37 in the below archive.