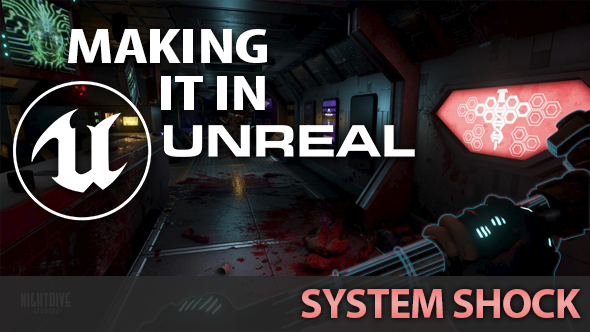 System Shock’s remaster already looked stunning more than a year ago. Citadel Station, thought rendered obsolete by two decades of first-person genre development, was resplendent in that first trailer – a blue-green cathedral of coloured lights and jittery post-humans. It was as if developers Nightdive had casually dropped the word ‘cyberspace’ into conversation and not only got away with it, but somehow made it sound right again – even relevant.

“All game content in this video is subject to change,” read the disclaimer. It was tough to imagine why anyone would change anything about this densely stylised sister to the Bioshock series. Yet change it did.

Why did Nightdive shift the new System Shock from Unity to Unreal Engine 4? And what’s new now that they’ve made the switch?

There were two important considerations behind the engine swap. First, after conversations with both Epic and Unity, Nightdive decided Unreal Engine 4 would be the better choice for hitting their performance targets on consoles. And second, more pertinent for our purposes, was the team. Nightdive have hired a bunch of “very senior” developers, a number of whom worked alongside game director Jason Fader at Obsidian on Fallout: New Vegas. 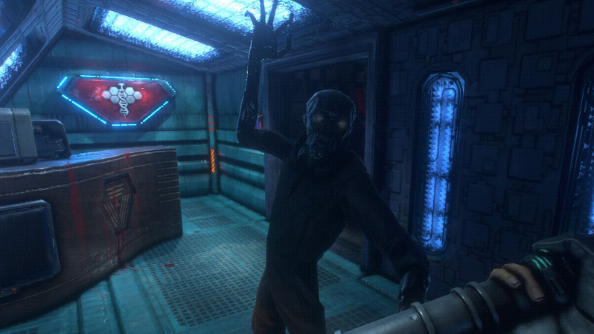 “These guys had more Unreal experience than Unity experience,” explains Fader. “And instead of having them get up to speed on Unity, it made more sense with what we had in the pipeline to go with an Unreal ecosystem.”

Thankfully, Nightdive were able to pull over a “good chunk” of the work they’d already done in pre-alpha.

“The code doesn’t really translate, but the core fundamentals of the system we were working on definitely do map over,” says Fader.

Creature design, items, weapons, and to a certain degree environmental layouts – all were translated from the Unity demo with a minimum of time lost. In March, less than a year after the initial reveal, Nightdive put out another trailer in Unreal.

“Overall, it’s been a pretty seamless transition,” Fader concludes. “I guess what we showed off in the Unreal trailer was more of a tech demo than a final representation of the art style. It was just something we wanted to put together to show that we were making something: it’s in Unreal, and Unreal will help us to get better visual fidelity at the same time on multiple platforms.”

Ask Ken Levine about working in Thief’s Dark Engine for System Shock 2 and he’ll tell you about carving passageways into the editor, as if space itself was made from dense rock. Rebuilding Citadel for the new System Shock couldn’t be more different – the team used a tile-based construction system reminiscent of the one Fader and much of his team worked with on Fallout: New Vegas.

“What that means is that we have our environment artist creating tiles – chunks of a level, chunks of a hallway, wall pieces, floor pieces, ceiling pieces,” Fader explains. “And then they go away and construct these things, almost like working with a digital set of Lego.”

The system allows them to get levels up and running quickly, and Fader believes modular design is even better suited to System Shock than it was to Fallout: “Mainly because we don’t have to worry too much about terrain and extreme environments, and fortunately a space station already feels modular in its construction.”

An issue that Bethesda have run into in the past is ‘asset fatigue’. It’s that uncanny sense, on the 20th Ayleid dungeon, that you’ve seen that same set of sarcophagi before. Once you’ve noticed, it’s hard to shake – and it’s something Nightdive are working to avoid.

“One of the strategies we’ve adopted from past games that we’ve worked on is that it’s not necessarily about the environment, it’s about what you put in it,” says Fader. “We can have a game where you see a lot of viscera strewn about the station, and there’s a lot of opportunity for visual storytelling.”

A corridor in a space station might not in itself set the industry alight with its visual inventiveness. But the way it’s dressed, with cybernetic doohickies, body parts, and dramatic lighting, can play on our fears and make it distinctive. 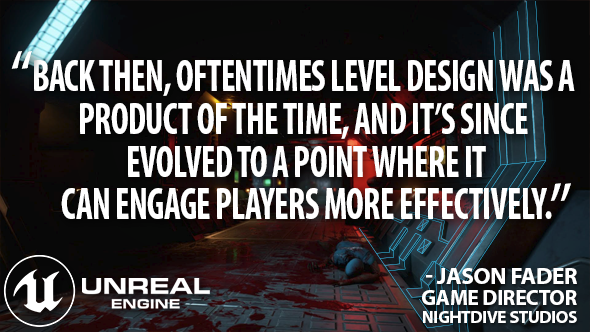 Of course, Nightdive are somewhat wedded to maps drawn up by Looking Glass in 1994. That’s no bad thing – there were few, if any studios in the ‘90s, with greater pedigree in that area – but the team aren’t letting the limitations of two-decades-old level editing hold them back.

“Back then, oftentimes level design was a product of the time, and it’s since evolved to a point where it can engage players more effectively,” notes Fader. “There are areas where we could make that aspect of the game more fun by opening the level up more or making it a little less maze-like, and adding more areas of interest to show exactly what they’ve done to create these cyber monstrosities. It really gives us a lot of flexibility.”

Murder in the frozen aisle

The most striking part of System Shock’s Unreal Engine 4 trailer – more tech demo than representative slice of the game – was the moment a couple of mutants were frozen solid by a nearby fuel canister. Using a wrench, the player was able to knock heads and limbs off the station’s new statues, which keeled over and shattered on the hard metal floor.

“You’re on a space station, it’s very cold,” argues Fader. “There are a lot of cooling systems going throughout the station, and we want to give players a lot of cool opportunities to interact with these physics systems.”

The team looked at the way freezing was handled in Bioshock and Mass Effect, but found their solutions lacking.

“Their technology is limited in that it’s not target-based destruction,” Fader expands. “If you swing a pipe at something that’s frozen in Bioshock, the whole entire thing shatters, and there’s no actual feedback as to what you’re hitting. We want to take it a step further.”

For System Shock, Nightdive have been working with an Nvidia package that can turn a non-static mesh – i.e. a living, lurching mutant – and turn it into a static mesh, so that it essentially becomes an object in the world. That object is then subject to locational destruction in a way it wasn’t just moments before.

“What you saw in the trailer was our first pass at that technology,” says Fader. “Since then, our lead programmer Matthew Kenneally has been hard at work refining it. What we’ll show in future trailers will definitely be more impressive than what you saw before.”

In this sponsored series, we’re looking at how game developers are taking advantage of Unreal Engine 4 to create a new generation of PC games. With thanks to Epic Games and Nightdive Studios.