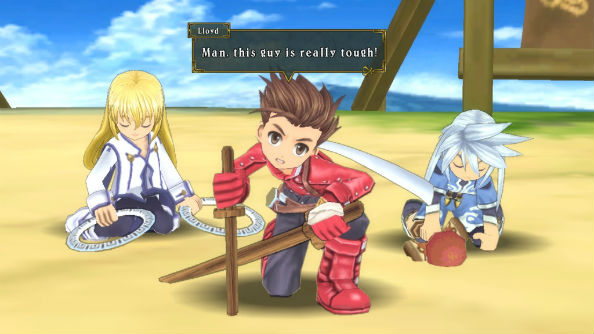 Tales of Symphonia, 2003’s Gamecube JRPG classic, is finally available on PC. Following last year’s Tales of Zestiria, it’s also only the second Tales game that’s so far reached desktops and is based on 2014’s PS3 port. It’s also currently in a bit of state, so says many a disgruntled player.

I love shutting myself off from the world with a good role-player. You too? Have a swatch at our list of best RPGs for PC.

Given the PC version of Tales of Symphonia is based on a port hardly two years old, you might’ve thought: I bet this one looks great. I bet it’s all polished and sparkly and oh-so-modern-y. Not quite. Unfortunately, the Tales of Symphonia PC release appears to be marred by errors.

As laid out in detail on NeoGaf, The Symphonia PC port appears to be locked in at 720p resolution, despite promises of 1080p on the game’s Steam page. Some languages are apparently broken, with some words in certain languages not translated at all (localisation info appears to be saved as Excel and txt files).

Worse still, the port seems to have added new typos, and still at times refers to R2 and L2 – buttons found on PlayStation controllers. Numerous crashes have been reported, so too have lengthy load times, and the game apparently also uses a DRM called VMProtect which creates a new *.exe each time the game is started up. Not good.

I love the Tales series and have been excited to see it making its Steam debut since last year. I’d normally recommend giving it a shot, but can only advise those who haven’t purchased Symphonia as yet to hang fire until this multitude of issues has been addressed.