Talisman: Digital Edition has done very well for digi-velopers Nomad Games and their Fantasy Flight/Games Workshop cardboard masters. Its sold in excess of a million copies since it first appeared in early 2014 and started spitting out expansions. However, when our Jeremy sat down with Nomad Games Managing Director Don Whiteford, he had an interesting fact about the split between mobile revenue and Steam – it’s actually sitting in the PC’s favour.

Everything’s getting a bit grim dark in Talisman with the Horus Heresy version recently announced.

This is rarer than you might think. In fact, in general, when a multi-platform release happens on PC, it does best elsewhere. Take Fallout 4, which may have sold well over two million copies on Steam, but did 12 million across all platforms. Meanwhile Hearthstone has however many tens of millions of accounts, but a huge number of those will play exclusively or majorly on mobile. Talisman, though, is different.

“Broadly speaking it’s around 60% PC/Mac and 40% mobile,” says Whiteford in our recent interview, “and our mobile audience splits pretty much down the middle between Apple and Google. I understand from talking to other developers that this proportion and balance in the mobile area is also unusual. It’s the first time we’ve gone into the mobile space as a company but it’s done very well there and, of course, we have cross play so people with a tablet or mobile device can play with PC or Mac.”

Jeremy put forward the idea that maybe folks prefer playing on PC due to the hour-or-more session time Talisman can take, to which Whiteford agreed, “I think that’s right because it is a lengthy game. Horus Heresy does play a little bit quicker, you can have faster games depending on how you set it up but yes, I think you’re right, I think it’s that personal space to sit down and have a few hours of gameplay.” 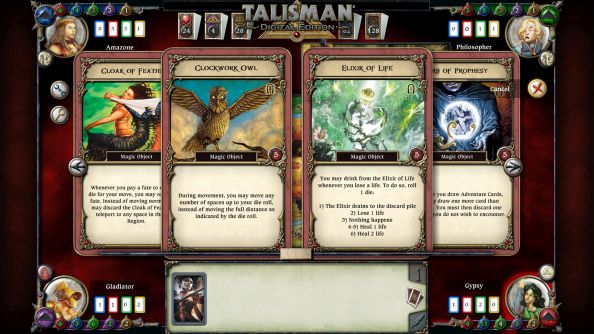 This isn’t something that Nomad were predicting beforehand, however, as he points out, “Steam was a surprise for us, we were unsure how people would take to it on PC, because originally we thought maybe the mobile platform and particularly tablets would be more prevalent. But of course it’s a lengthy and detailed game and that’s the kind of thing where people who have PCs will sit down to spend some time, so it did surprise us pleasantly. The Steam ecosystem is very good with the forums and so forth for talking to the fans and sending news out, so it’s become a very key place for us really.”

I’d be interested to see if other mobile developers have similar stories, and if the assumptions about big players like Hearthstone are correct. I played a lot of Ascension on PC, despite the crappy port, but mostly because it made a good second-screen game for when I was watching TV and wanted to keep my hands busy. I doubt most of its revenue is made through folks like me. Are there any mobile ports you prefer to play on PC, and have put significant dosh into?