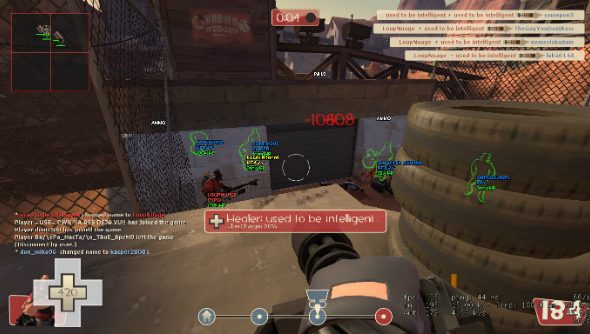 The most prolific TF2 cheatware LMAOBOX has finally been detected by Valve Anti-Cheat and resulted in a wave of bans that includes more than 160 UGC league players.

Want to improve your game the right way instead of paying for a hack? You’re going to need to get to grips with the best FPS games on PC then.

The hack, which has been available for free or in a premium version for more than five years, was added to the VAC detection list in a recent update and, according to some competitive players caught in the wave, bans are backdated by almost a year.

A wave of bans have hit players at all levels of the largest competitive TF2 league UGC including the top Platinum tier in Australia, New Zealand and North America.

One of the caught players, “Vlad”, claims that while he was playing on Platinum-tier winners Dunning-Kruger Effect and Gold-tier NA team A Million Ways in Season 17 (during 2015) of the UGC league he used the software during league matches but has not used it since.

“Back in S17, flare showed me lmaobox on his private server, and, this kind of piqued my interest. Something to make you good really quick? Sounds good,” he writes in a forum post explaining his ban. “I got more and more cocky in using [the hack] on a non alt, and then started messing around in pubs for a bit. I used it in s17, because I was really not as good at that point. I wanted to be good, and that was the best way to do it.”

A full list of the bans issued to players in every competitive tier can be found here and stretches to more than 160 from Iron to Platinum.

As a result of the hack finally being caught, the creator of LMAOBOX has released the code to the public and ended development on the software.

“Hey since this cheat is having some vac problems, im going to release it to the public,” the owner stated in a forum post on the subject. “This marks the end of the lmaobox project; I hope everyone enjoyed it.”

I think it’s safe to say that not everyone did.

In other Valve Anti-Cheat news, futher steps were taken to prevent CS:GO hackers from competing in the currently beta-tested Prime Matchmaking by banning every account with the same phone number associated. This is to ensure players cannot use Prime on alternate accounts that don’t matter if they’re banned.