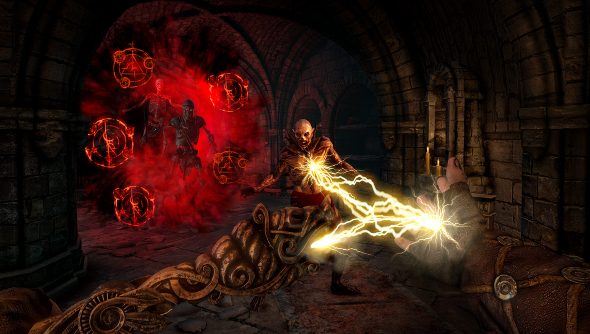 Hellraid is Dead Island developer Techland’s gorey first-person hack and slash RPG, and we’ve not heard much about it for a while. That’s because Techland have been presumably rather busy making significant changes.

So it’s being re-announced: a new Hellraid, not the old Hellraid. That means a new engine, new combat systems both for melee and magic, and a crafting system.

The combat focused RPG will let players experience the joys of halting a demonic invasion. Custom characters all share one unified class, with various paths and unlockable skills in the combat, magic and agility trees.

It’s split into three modes. On top of the story mode, where heroes battle the forces of hell, there’s a mission mode where the levels become point-based challenges with leaderboards, and arena mode, where fighters have to hack and slash their way to survival. And this is all with up to four players.

Hellraid is due to hit Steam Early Access this autumn.