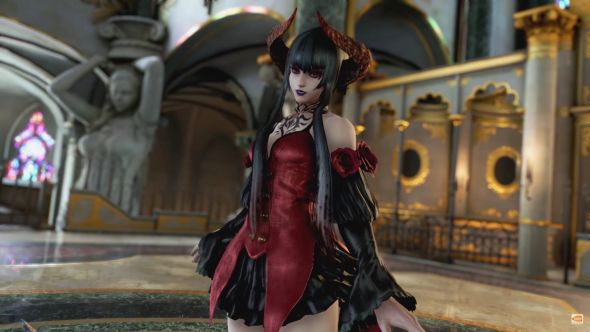 Update January 25, 2017: Eliza, Tekken 7’s pre-order bonus character, just got her own reveal trailer. You can watch it above.

If you’re a Tekken fan but aren’t yet familiar with Eliza – and you may not be, since she’s only appeared in a free-to-play PlayStation 3 game so far – here’s your introduction, via a new reveal trailer on YouTube.

What else is there to look forward to in 2017? Check out most-anticipated upcoming PC games.

Eliza will be day-one DLC in the forthcoming Tekken 7, and will be bundled with any pre-order. She is a vampiress who also apparently suffers from narcolepsy. This feels like a good time to mention, in case you didn’t know, that Tekken is fairly bonkers.

Long-time Tekken producer Katsuhiro Harada took to twitter to discuss Tekken 7’s approach to DLC. He says its season pass will enable Bandai Namco to support the game with new content for a full year post-launch, rather than the two months’ worth of updates they offered in the past. He also promised that no “classic” Tekken characters will be sold as DLC, only “special content”.

The season pass is a first for the series and has raised eyebrows among some fans. Tekken 7 is also the first time the fighting series has graced the PC (see original story, below).

Many classic characters are there, including Nina, Lee, a new JACK and Lars, the latest addition to the implausibly dysfunctional Mishima family. Akuma, crossing over from Street Fighter, can also be briefly seen.

Bandai Namco claim that Tekken 7 will be “the final chapter” of the endless Mishima family feud. We’ll believe that when we see it; the world’s worst family have underpinned Tekken’s increasingly barmy storylines since the franchise’s inception.

As for the all-important character roster, Bandai Namco say it will feature “over 30 characters”, some of whom will be brand new.

The announcement also lays out the many editions, pre-order bonuses and season passes. Here goes: