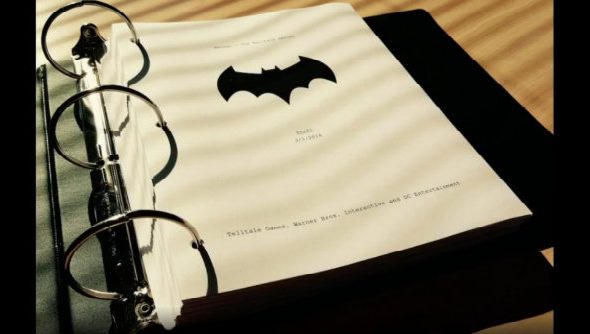 Telltale’s Batman series will premiere this summer, Telltale revealed during tonight’s livestream, along with a host of other new details.

A Minecraft: Story Mode Episode 5 release date will be announced Tuesday next week. Check out the best Minecraft seeds while you wait.

Telltale’s Batman is being created by the same season leads that worked on Tales From the Borderlands which, in my opinion, is the studio’s best work so far. As well as having the A-team behind it, Batman will apparently be an evolution of what we’ve seen from the studio so far and will also be the most significant step “technologically and creatively”.

If you’re wondering how it will look, the panel during the livestream describes it as a living comic book similar to The Wolf Among Us, but powered by a lot of new visual technology, including new rendering techniques and other tricks.

Batman will exist in its own universe, so the studio has the freedom to take the R-rated story wherever they want, within reason – much like how Rocksteady put their own twist on Batman’s big bad guys. Telltale say it will be similar to the studio’s usual output in terms of mood, so it really will be a dark few nights for the Caped Crusader.

This is a Batman game, of course, but Telltale want to carve out their own identity in this world.

You will play as Bruce as often as you’ll don the cowl and prowl as the Dark Knight. “Bruce is cool,” say Telltale. There are plenty of games out there that have explored what it feels to be Batman, but this will show you waht it’s like to be Bruce, and how that double life, in turn, affects being Batman. It’ll be a split between the two personas, like how the movies explore both sides of Bruce Wayne.

The aim is to get behind both masks: both Batman and Bruce Wayne, trying to peel back the personas and discover the man underneath. Sometimes you even get to decide whether you address issues as Bruce or as Batman.

It sounds like it could be excellent. If Telltale can deliver an experience that’s of the same high quality as the same team’s Tales From the Borderlands, it could be special. We’ll update with more information as it lands before the first of five episodes land in Summer.