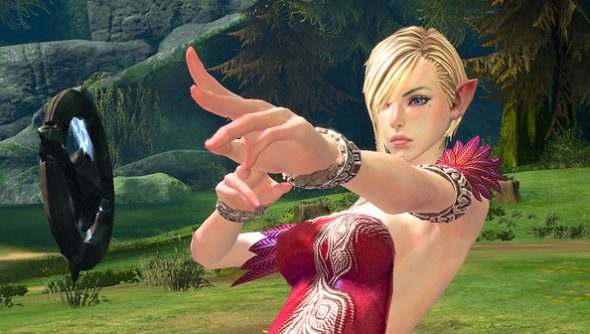 Apparently it’s been 71 days since we first wrote about TERA’s free to play relaunch, which doesn’t sound right at all. Let’s see: since then, I can remember going to the toilet and returning to my desk via the biscuit cupboard in the kitchen, but not a lot else. Still, I’ve reportedly been gone long enough for the newly subtitled TERA: Rising to breach the one mili player mark, and then some.

The relaunch in February introduced extra PvP arena battles, an extra dungeon, extra political machination, and a number of extra servers to discover the new features on.

“We’ve been blown away by the waves of players logging into TERA, and we’re seeing amazing growth in both registrations and daily users,” said En Masse CEO Chris Lee, who shares Saruman’s voice in my head.

“It’s always great to eclipse the one-million-player mark, and at our current rate, it won’t be long before we hit two million.”

In-game celebration comes via the ominously apostrophe-less Dracoloths Rising event. Over the course of the next five days, oversized wyverny creatures will drop in, presumably wielding a congratulatory card, for a cup of tea and a cake.

“They’re too big to handle alone, so collect some friendly fighters and head out to find them,” advise En Masse. “They could be anywhere – but they’re dracoloths, so they’re not exactly inconspicuous.”

So much for the MMO whose North American operation shrank to three serversjust last year. Have you returned to TERA now it’s sub-free?