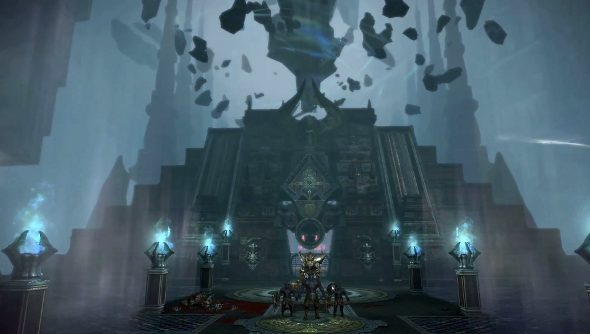 On July 8th, Terra: Rising’s next update, Wounded World, will go live. A big ol’ rift has carved up the world, and within it, players will be able to get their hands on all the new content. Global catastrophes are an important part of any fantasy land’s economy, furnishing heroes with gold to spend and loot to sell.

The update brings with it four new dungeons and a bevy of bosses, gear and quests. The dungeon scenarios range from 1-player rescue missions to boss hunts with a party of 10.

The charmingly named Abscess dungeon is an infected, no doubt smelly part of the rift. Inside the putrid wound are lots of lovely mutated monstrosities and architecture that looks like my insides that one time I ate a kebab off the floor.

It’s a 7-player surgical strike with the party needing to burn their way through hordes of infected legions and the nasty things that command them.

Ah, Rift’s Edge is more my speed. An expedition into a verdant forest in search of a mystical object. Just perfec– there’s a giant bug eating my leg.

Lakan’s Prison is not the sort of place you end up in for not paying your taxes. And the things inside it are best left alone. Not stupid blooming sorceresses, though. One of them is staging a prison break and five players will have to stop her.

Forests are clearly not to be trusted. The final dungeon of Wounded World is Ghillieglade forest, where a tree’s gone bonkers and he’s driven the rest of the forest round the bend. Silly tree. It’s up to one player to get the tree back to its old self by kicking the sap out of it.

Think you’ll be checking all the new dungeons out on July 8th?