I’ve recently gotten into gardening. I live in rented accommodation, so I should count myself lucky to have any outdoor space, but instead I resented my plot of overgrown weeds, patchy grass, and miscellaneous rubbish. Then spring came, and with it warmer weather and a greater desire to be outside. I got to work cutting back the grass and weeds, potting wild flowers to help attract pollinators, and herbs for some fast-growing greenery. It’s still wild, but there’s some balance there now, and every improvement I make delivers a sense of satisfaction that not even hitting tier 100 on the Rainbow Six Siege battle pass can match.

Terra Nil, a so-called reverse city builder about wasteland rejuvenation, has managed to supply some of that same warm fuzzy feeling in the space of a two-hour sitting. And it doesn’t get dirt under my fingernails either.

You start with a randomly generated slice of wasteland, a limited pool of resources, and a simple, but lofty task: completely renew the land, and then move on without leaving a trace.

Wind turbines provide energy, but can only be placed on boulders. With electricity you can power scrubbers, which clean the soil of toxins, and irrigators that spread greenery across any healthy soil in their area of effect. Pretty soon you’ll need more boulders so you can place wind turbines further afield, which means filling up trenches with water pumps and adding calcifiers to create rock formations. Then, as you approach the boundaries of the map, you’ll realise you need more river beds so you can create more boulders to extend your power grid right to the edges of the wasteland – time to build a massive excavator, which creates a trench by firing a missile through the earth. 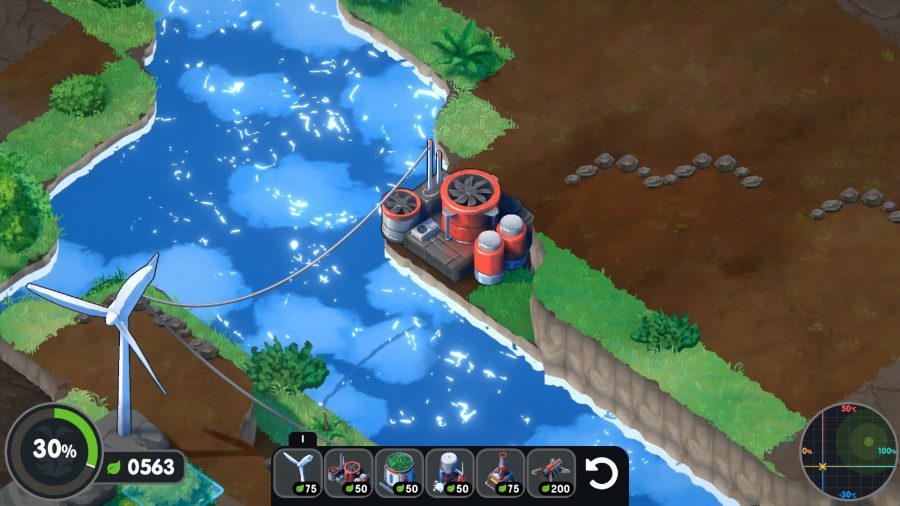 Excavators and calcifiers are expensive, and kill greenery by poisoning or covering the soil, so you need to be meticulously efficient as you work your way across the wasteland. Irrigators cost resources, too, but as the resource in Terra Nil is greenery, they can cover their own cost if you place them somewhere where they can cover a lot of ground. Clumsy planning and placement will thus deplete your resources quickly, and you can easily end up with a half-replenished map that’s covered in signs of human activity – Terra Nil’s equivalent of a game over screen.

Terra Nil revels in the wildness of nature, celebrating the richness of life over your ability to order or organise it

Once the world is green and alive, it’s time to add biodiversity. Upgrading irrigators near water creates wetlands, placing a beehive on a tree will pollinate meadows, and to seed forests you’ll need to pair a solar amplifier with a dessicator to burn down some of those meadows and create a nutritious ash heap. Pop an arboretum on top and a forest will spring up around it.

The final step is to delete everything you’ve built by sending drones to salvage your facilities, returning the recycled materials to a larger drone, which is your route off the planet. And that’s it – in and out of there like a green-thumbed Tom Cruise, rappelling down from the skies to breathe life into a dying world. 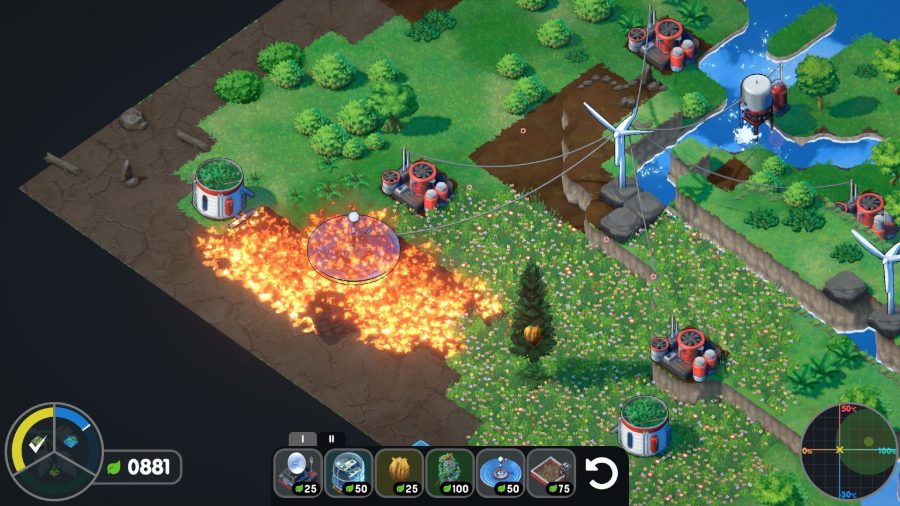 Hopefully, when you leave, you’ll be able to spot ducks paddling across wetlands, bears foraging in the woods, and deer grazing in the meadows. You’ll also spot mistakes, like little patches of poisoned land that you weren’t able to restore, adding a little incentive to boot up a fresh map and try again. There’s no way to neaten things up or consign each habitat to a tidy little plot – Terra Nil instead revels in the wildness of nature, celebrating the richness of life over your ability to order or organise it.

Depending on how carefully you approach it, the whole process can be wrapped up in a couple of hours. Brief yes, but plentily replayable, and probably two of the most cathartic hours I’ve spent gaming all year.

There’s currently no release date for Terra Nil, but you can check out the demo for it in the Steam Next Fest here. You can also check out our lists of the best city-building games and the top strategy games on PC if you’re looking for more recommendations.