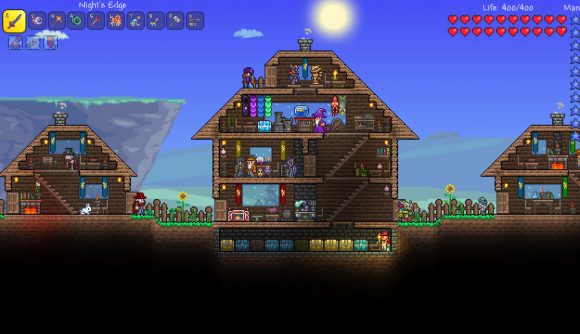 It seems that nothing will stop Terraria from continuing to be updated – except maybe a sequel. To be clear, Terraria 2 has absolutely not yet been announced, but the devs are absolutely teasing its existence. A couple of knowing nods already have fans eagerly speculating on the possibilities.

Terraria creator Andrew ‘Redigit’ Spinks recently updated the location in his Twitter bio to say “Terraria 2 – a new age”. Prolific Terraria YouTuber Chippy quickly picked up on the change, and fellow Terraria dev Whitney ‘Cenx’ Spinks dropped a Doctor Who gif warning of “spoilers”, and adds that “Red is a massive troll. I wouldn’t trust it. Or would I?” (And also made a Twitter bio change teasing “Terraria 2.5 the Final Update”.)

So while Terraria 2 is still as-yet-unconfirmed, the devs are definitely willing to let us all go wild with speculation on its existence. After publishing about four final updates for the original, I can’t imagine there’s any better way to reveal a sequel to the world than by trolling everyone on Twitter.

Just don’t expect a straight answer for a while yet.

For more sandbox games to dig into in the meantime, you can follow that link.