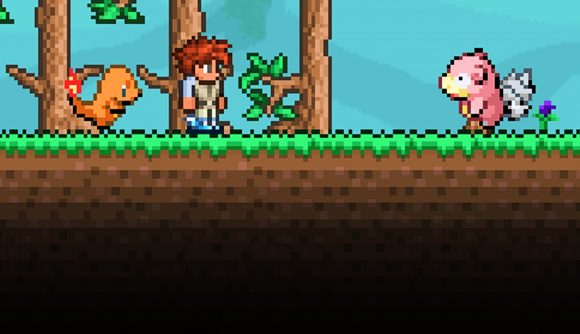 A group of fans is making a Terraria mod that ought to scratch the itch of any Pokémon fan who fancies some creature catching on our native platform. We may never get an official Pokémon game for PC with all the typical bells and whistles you’ll see in Scarlet or Violet, but that’s not stopping modders from filling the void.

Terramon is an upcoming mod for Terraria that’ll feature plenty of pocket pals, catching, and battling. One of the developers tells me that it’s been in development since 2019, though work is on and off. “It’s not my main focus which is why even now, in 2022, it’s barely completely finished,” Jamz tells us. “It’s more of a passion project I work on when I have time. Sometimes when I have bursts of energy I’ll work on it for longer.”

The mod’s conception arrived as another project went awry, with Jamz believing that a mashup of Pokémon and Terraria would “just fit well together”. You can currently play a work-in-progress version of the mod, though Jamz says it’s essentially just a “pets mod with some unique features like a catching mechanic and advanced user interfaces”.

Once you download the mod, a Trainer NPC will be available to join your base. They’ll provide Pokéballs and evolve your ‘mons when they’re ready. You’ve currently got all the Pokémon from the Kanto region aside from legendaries, though there are some foreign Pokémon that are only catchable during the holidays.

There are plenty of neat features on the way, too. “Alongside battling, we plan to add an interactive Pokédex, berries, and eggs alongside breeding, trading, and world-generated Pokémon Centres,” Jamz says. The modder also confirms that you can battle both NPCs and players.

March 2022 Snapshot of my mod Terramon- bringing the world of Pokémon to Terraria! from Terraria

Terramon is due to release this Summer, though you can closely follow the mod’s progress on Discord. “We’ve had people waiting for a long, long time,” Jamz says. “I think people are really sleeping on this mod and its potential to be among the most popular ones like Calamity & Thorium one day.”

For more of the best Terraria mods, you can follow that link. You can also check out our sister site Pocket Tactics for everything on generation nine like Scarlet and Violet new Pokémon and the Pokémon Scarlet and Violet legendaries. We’re quite partial to the grass kitty, if we do say so.