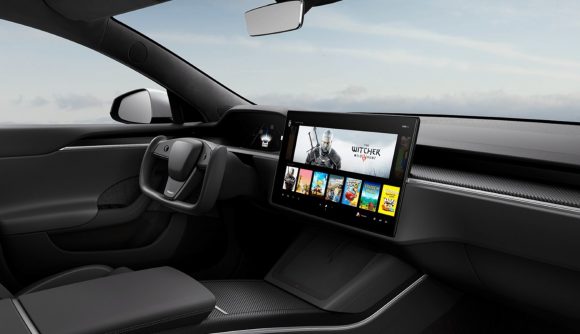 Tesla cars released in the past few years are known in part for their ability to play some lightweight games like Stardew Valley or Beach Buggy Racing 2 – a game that lets you use the actual steering wheel as a controller. The newly refreshed Model S and Model X come with an updated in-car entertainment system, however, and you know what that means. We wouldn’t expect anything less from a company as mad as Tesla, now confirming in a Twitter post that both The Witcher 3 and Cyberpunk 2077 will be able to run on the new hardware.

This wouldn’t have been possible before, but Tesla’s site gives us quite a bit of information on what the new system has in store when it comes to processing power. There was a rumour a few months ago that Tesla would switch to an AMD-based GPU, and this latest development could further confirm Navi architecture has found its way into cars too.

Tesla says this new hardware has up to ten teraflops of computing power, which, to put that into perspective, is roughly the same as Nvidia’s RTX 2080’s 10.07 teraflops. Only time will tell what other games the car can play packing the equivalent power to one of the best graphics cards of the last generation.

There’s a 17-inch screen up front with a 2200×1300 resolution, in a true landscape orientation rather than the portrait configuration in previous Teslas – so playing Cyberpunk on this could actually be a solid experience rather than a gimmick. You can even hook up your best PC controller wirelessly, as we can’t imagine the steering wheel being the easiest way to guide your character through Night City.

You can play The Witcher 3, Cyberpunk & many more

You can even be a literal backseat gamer, as passengers have access to a smaller screen. We don’t think it’d have the power to run two separate games on each screen, however, but it could always surprise us if you crank the settings down. 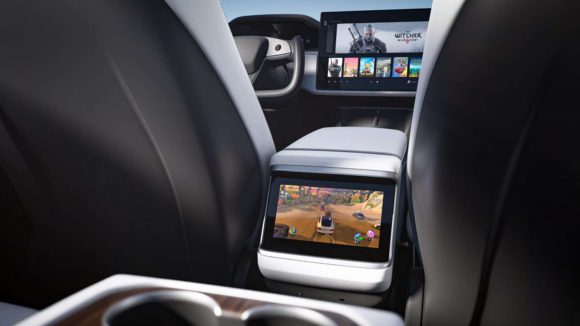 So, if you’re struggling to source PC parts to play the latest games and you happen to be in the market for a car too, then this is a perfectly rational compromise – although it’ll set you back a minimum of $80,000, and we don’t think GPUs are ever going to rise to that price. Or you could just play on your PC – check PCGameBenchmark to see how well your setup matches the Witcher 3 system requirements.