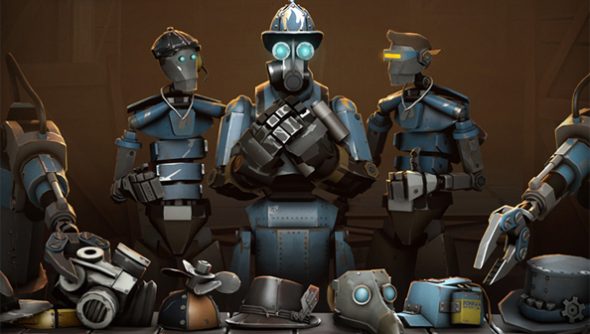 This weekend’s Robotic Boogaloo was a bit special – a Valve-backed update conceived, organised and designed in its entirety by the most creative elements of the TF2 community. For the average player, however, starved of meaningful updates for months, it prompted a few questions. Most pertinently: “This is all just hats. WHY IS IT ALL HATS?”

Team Boogaloo co-organiser Mnemo took to the Steam forums to address some of the robotic hullabaloo that has greeted the hat pack’s release.

“This update serves three major purposes which are not readily apparent,” he explained.

Firstly, the Boogaloo served as a “field test” for Valve’s incoming item importer. The new importer features a stricter set of guidelines for modders during submission, allowing Valve to to implement modded items into TF2 much faster. As the tech is still in beta and doesn’t yet support anything but hats and miscellaneous items, the Boogaloo proved the perfect community effort with which to test its chops.

Secondly, Valve deemed the update the perfect chance to stress test SteamPipe, the new distribution system Team Fortress was recently shunted over to.

“Thirdly, it was a test to see how well the community could come together and create an update on their own,” said Mnemo. “Hopefully, if given the opportunity, more of these events will take place in the future and they will be bigger and better in every way.”

Mnemo concluded by telling fans to stay tuned for news on future community-produced projects, and brushed off any responsibility for committing that most heinous of sins: distracting Valve.

“Valve’s contributions to the content of the update include: designing the crate and key, plugging the items into the game, coming up with (most of) the hat names and descriptions and providing us with general feedback and support as we progressed,” he said.

“If Valve has been working on other forms of new content (which we personally have no knowledge of), then this update did very little to sidetrack that.”

Have you picked up any of the Boogaloo’s androidgynous headwear yet?