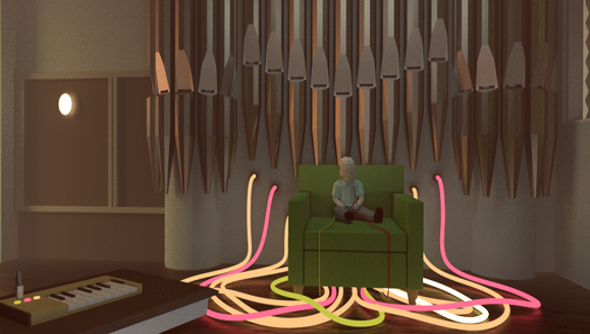 That Dragon, Cancer is the sort of game you hear people tell you about just before the admit they cried their eyes out. It’s a love letter from a father to his son, an autobiographical adventure game where players can experience the harrowing real-life story of a family dealing with their child’s brain cancer.

Joel Green sadly died this year, but his father, Ryan Green, and his collaborator, Josh Larson, have continued development, expanding it beyond its Ouya roots. That Dragon, Cancer is now being developed for PC as well, and the developers are now looking for funding to finish the game on Kickstarter.

“The last two years of our lives have brought the game into clear focus, and now feels like the right time to engage the community of people who have always believed that games matter and that modern games can have an even bigger cultural impact,” say the developers.

“Kickstarter is the perfect platform to partner with with all of you who have so passionately supported this game, and include you in the story itself through backer rewards.”

Green and Larson are asking for $85,000, which will allow them to finish the last three scenes along with polishing and refining the game. They estimate another 8 months of work. $145,000 is actually what’s needed, but the rest will come from a private loan.