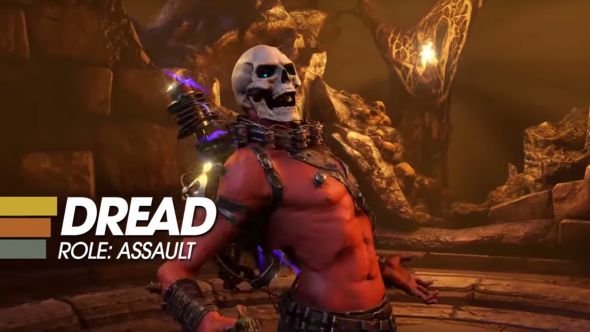 A new trailer for The Amazing Eternals, the new game from Unreal Tournament devs Digital Extremes, has been released. The video recaps some of the hero shooter’s key mechanics, while also showing off some of the game’s characters and their classes.

Check out some of the other best FPS games on PC.

The Amazing Eternals is a “fresh take on the hero shooter genre,” which combines the action of a fast-paced FPS with a collectible card game. You’ll be able to build your decks and then take them into battle, unlocking upgrades, weapons, and traps that you can use at any time. You can find out more about The Amazing Eternals, and watch its first trailer, here.

The trailer aims to explain a few of the game’s hero classes, as well as introducing some of the playable characters. Those characters, as well as the maps that feature in the video, are all built around a respectful reimagining of popular B-movie tropes.

The first class on show is ‘control’, which features Ray, a 1950s-style spaceman, and Niia – imagine female Indiana Jones with a bow and arrow instead of a bullwhip. Their purpose seems to be to put out a decent amount of damage while trying to corral the enemy team into certain areas of the map. Ray does this using an automated drone while Nia lays damage-dealing traps.

The second class is Assault, featuring the skeletal Dread, and Winter, another 50s sci-fi spaceman. These two are all about dealing damage, and their brief showcases show them racking up a bunch of kills with a variety of weapons.

There’s also Bristle, an ent-like Tank who can close off areas of the map with walls made of roots, and Nautica, an aquatic healer. Those are all of the eternals that feature in the trailer, but there are plenty more featured in the game’s other artwork, so expect to see more of them soon.

The Amazing Eternals is due to make its first public showing at PAX West this weekend. You can sign up for a chance to access the online beta now, or enter the game instantly via the Founders program.