The Darkness is approaching. That means a new tale of challenging decisions, complex battles, and ceaseless misery is on the way with The Banner Saga 3. The last game in Stoic Studio’s Nordic trilogy promises to conclude the caravan’s story in apocalyptic style. So you can be sure there are plenty of inventive new tricks that you’ll want to make use of in Rook, Alette, and Fasolt’s final stand.

Add a little frost to your summer

Stoic are determined to bring some frigid temperatures to your summer with The Banner Saga 3 release date set for July 24. So while it’s hot and sunny outside, you can transport yourself to the chilly world of Norse mythology, with its howling winds and frozen grounds.

Fight The Darkness on two fronts 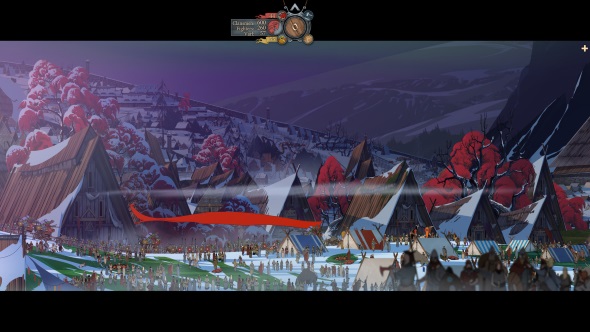 The third game in the Banner Saga trilogy will take into consideration every decision you’ve made in the series so far, and put you under increasing pressure. This time, the mysterious Darkness is close enough to breathe down your neck, so it’s time to face it head-on. To do so, you’ll need to fight on two fronts, the first of which will be at Arberrang, the capital city of men in Rundwall.

“The Darkness is pressing closer and closer to you,” Arnie Jorgensen, co-founder of Stoic, says. “The art [of the city] is dynamic and changes based on decisions you make. You may make an unwise decision which results in an entire part of the city being on fire. You might lose a wall. As these decisions are happening the whole art piece is going to be changing.”

If you’re concerned that this means The Banner Saga 3 is much more static than the previous games, don’t be. “There will be travel in Arberrang, but it is going to be close travel through city streets,” Jorgensen assures. “Ultimately, what you are trying to do is keep as many people alive as you can, holding off The Darkness and buying the other caravan time.”

Yes, this time you have two caravans to worry about. While your main camp in Arberrang concerns itself with bolstering the last line of defense, a second one is travelling towards danger to strike at its heart. This opens up a number of interesting routes to the game’s many different end states. 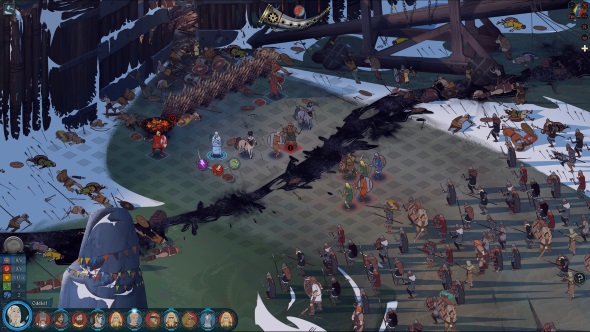 As your second caravan is literally travelling through The Darkness you should expect The Banner Saga 3’s enemies to be even more ferocious than before. You’ll be attacked by soldiers that have been mutated into purple creatures with serrated edges and evil eyes. “They have new passive abilities since they’ve been warped,” Jorgensen explains. “They have heightened statistics.”

There are more threats to be discovered inside The Darkness, though. Those alone will make battle a more bitter struggle than before, especially as you are surrounded by The Darkness on all sides this time around. “In combat there is actually now a turn counter, where literally in each fight you are racing against the clock as well,” Jorgensen says. “If the turn counter reaches zero, another wave attacks you.”

This adds increasing pressure to The Banner Saga’s chess-like combat encounters. Should you be able to eliminate every foe from the field before the timer runs out, you are able to flee and continue the story. But, if you run out of time, more enemies will enter the battle. It’s easy to become overwhelmed should you fail to keep on top of things, but those who can withstand multiple waves will be confronted by minibosses who drop special items when defeated.

Long-term Banner Saga players have come to rely on willpower to aid in achieving victory. While willpower remains a key mechanic for The Banner Saga 3, the magical Horn – which bestowed characters with extra willpower points – has been taken away. Replacing it is a character-led system that requires you to position your warriors together in order to buff each other with extra points. Combat positioning has always been a vital skill but it is now of paramount importance.

Battle alongside new and returning heroes

Surviving characters from The Banner Saga 2 will act as the foundation of your forces in the third game, but they are joined by new or changed personalities. One of The Banner Saga 3’s new additions is Alfrun the witch. “She’s the first character who can give strength to another character,” Jorgensen says. “It’s a bit overpowered, but in The Darkness you’re going to need it.”

Alfrun is able to cast spells such as Ride the Lightning, a magic attack that allows you to dive into combat. “The further she travels, the more damage she does,” Jorgensen explains. “So you might want to pose her behind a tank, jump in, do damage, and get back.”

Returning from past games is Juno, but this time she’s an active combat party member rather than a passive character who exists on the sidelines. “Juno has been a mysterious character throughout the saga,” Zeb West, producer at Stoic, says. “She seems to know what’s been going on but she’s been really tight lipped. Now she’s playable on the battlefield. An interesting ability she has is that, if she dies, she goes into this ghost world and awakens.”

The spirit realm acts as a minigame within combat, and requires Juno to travel to fonts on the battlefield where she can collect dark energy. This matter is able to resurrect Juno, with more time she spends collecting it in the spirit realm resulting in her being stronger when she returns to the waking world. You’ll need to assess the risk, though: if everyone else dies while Juno is still in the spirit realm, it’s game over. So, be careful, as Arberrang and the rest of the world are relying on you.

The Banner Saga 3 releases for PC on July 24. It will be available on Steam and GOG.com.