When designing new dungeon-based levels in games, there’s a single, inescapable shadow that looms over everything: Dark Souls. There’s no denying the impact game director Hidetaka Miyazaki has had on RPGs. Further evidence comes in the form of The Bard’s Tale IV: Barrows Deep, which, despite being from the other side of the roleplaying spectrum, owes some of its sensibilities to FromSoftware’s giant.

“We took a lot of inspiration from the Dark Souls series of games,” David Rogers, creative director of The Bard’s Tale IV, reveals. “We really like the player gaining mastery over the environment. As you’re exploring you’re constantly knocking down bridges, opening up passageways, or throwing grappling hooks to shrink the level.”

If you need to catch up on where the genre is today check out the best RPGs on PC.

“You open up shortcuts that give you faster routes back to town or open new areas,” Rogers continues. “We have these massive levels but they quickly feel as though they shrink down to something manageable as you dominate the space.”

It makes sense that The Bard’s Tale IV would use ideas at the forefront of game design. Once upon a time in a land of Amigas, Commodores, and Spectrums, the original Bard’s Tale was a trailblazer. Its 3D grid-based dungeon crawling and animated character portraits were groundbreaking, resulting in it becoming the best-selling computer RPG of the 1980s, and positioning the series as a true competitor to the Ultima games.

It’s been 30 years since The Bard’s Tale III, but developer inXile still wishes the fourth installment to feel as if it has made the most of three decades worth of innovation. As such, the game has a modern, slick UI, full voice acting that’s keen on the rolling Rs of the Scottish Highlands, and a world that is freely explored without being restricted to movement tiles.

Considering its lineage, it would be easy to expect The Bard’s Tale IV to play akin to Legend of Grimrock, but instead there’s much more of The Elder Scrolls at play – the world of Skara Brae is home to dozens of talkative NPCs, and networks of shadowy cobbled streets that lead you to new treasures and challenges. Among those challenges are a variety of puzzles, ranging from logical simplicity to the truly fiendish.

“We have a certain number of base puzzle systems like you may have to disarm traps by rejiggering like a series of gears to turn off traps or open up secret doors,” Rogers explains. “Or you may even find a weapon that has puzzles built in, such as an image you have to shuffle back together, or channelling power from one end of this magical sword to another. You’re going to keep re-encountering these puzzle systems, and they keep getting increasingly complex so you learn upon what you previously played. Then we start combining them in different ways.”

Playing a role in the cracking of codes is the Bard themself. More than just a name on the front of the box, the Bard character class is able to solve problems by literally singing to them, suggesting that blues music was on to something all along. “Songs of Exploration are magical songs,” Rogers says. “They can raise the dead for interrogation, rewind time to rebuild stone structures or knock down walls, or kindly ask the woods to part for your passage.” 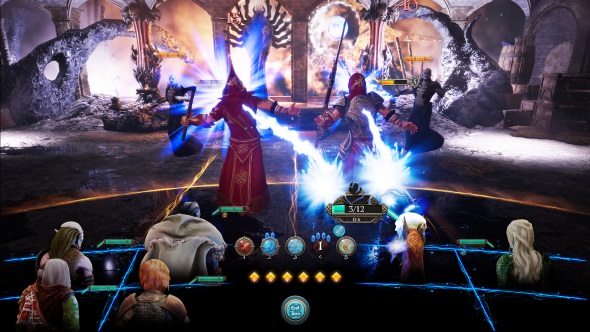 Songs of Exploration certainly sound effective, but for the riskier player there’s something far more tempting: mead, and a heck of a lot of it. Summed up as “tactical drunkenness” by Rogers, the Bard class can chug back alcohol during battle, which helps enhance their spells and buff the party. Take a swig too many, though, and you’ll find your Bard passed flat out on the floor, useless to all but those who need a fleshy door mat. The Bard’s Tale IV’s grid-based combat appears to be full of neat quirks like this that hint at the game’s depth when it comes to character progression.

The Roman numerals suffixed to the game’s title suggests that The Bard’s Tale IV is a game for those previously invested in the series. But that’s not true at all; despite its throwbacks and easter eggs, this is a thoroughly modern game designed for the world of today. Its budget, scale, and ambition means that it falls into an odd mid-point between the vastness of triple-A behemoths like Skyrim and stripped-back indies like Darkest Dungeon.

That positioning could make it awkward for fans of either side of that point to settle into. But should that hurdle pose no problem, and you’ve got an ear for Gaelic folk music, then The Bard’s Tale IV could well be your RPG quest of choice when it launches on September 18.