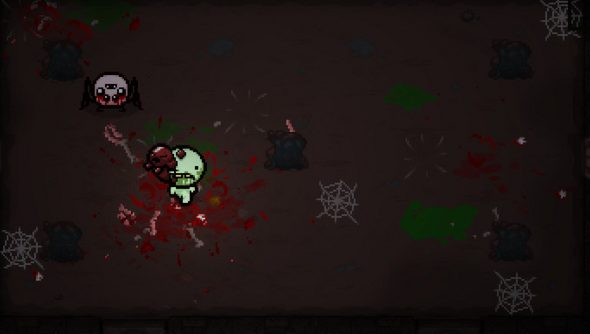 The Binding of Isaac: Rebirth launched late last night, and today I’ve been faffing around in basements – but mostly dying – for your amusement. I can’t say that I’ve ever proved to be competent in any of the games I’ve tackled for Playing With Myself, but in The Binding of Isaac I truly sink to new depths of awfulness.

And I loved – almost – every second of it.

It is a testament to the brilliance of Rebirth’s myriad novelties, grotesque enemy design and bizarre abilities that I was able to stomach it for more than 15 minutes. I am neither a coordinated man, nor a patient one, so when it comes to fast-paced roguelikes, I struggle. A lot. But in Rebirth, I came back from every failure, eager to continue, even if I wasn’t optimistic about my chances.

I never quite managed to find enough time to play much of the original, but even if I had, Rebirth comes laden with enough new monsters, levels, bosses, items and secrets so that it might as well be a new game entirely. Even the art and music has been redone.

We’re not talking about some HD remastered thingy, this is a proper remake, which is sort of bewildering given that the original is only a few years old. Bewildering, but oh so very welcome.

The more dexterous among you will no doubt avoid many of the deaths that sent me back to the start, but success is not the only route to enjoying Rebirth. Even after finishing the video and playing with myself, sans future audience, for a while, I didn’t get very far. This didn’t phase me, though. 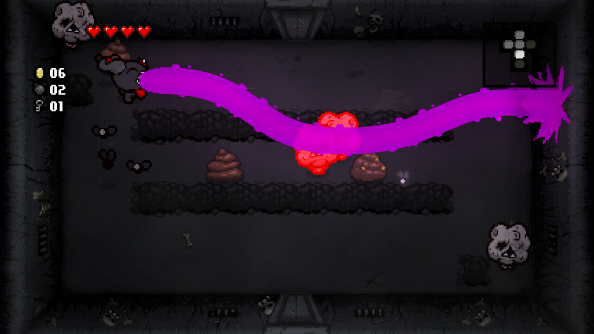 Even playing through the very first level over and over again can kick up some unexpected treasures, be they miscellaneous pills that affect you in unexpected ways, power-ups that transform you into strange beasts and shifty looking demons, or special enemies that – when murdered – drop equally special loot. Secret rooms and surprises can be found right from the get-go, not only after you’ve climbed down a few levels.

It’s still punishing, even cruel at times, but there’s been an effort made to make it a little bit more user friendly. Don’t fret, though, as this is not the sort of user friendliness that accompanies streamlining or the dreaded “dumbing down” of the game. It simply comes with difficulty levels – I was playing on Normal – as well as much needed controller support.

And if you like poo, god, this is the game for you. I mean, there is almost too much poo. I know, I know, how can there be such a quantity, but there is. It wobbles, splats, sometimes attacks and you can even make your own long chains of fresh shite if you know the appropriate cheat code.

I think that’s what you should take away from this: The Binding of Isaac: Rebirth puts poo on a pedestal, and that’s brave. And if you want to share the experience, and the poo, then you can always grab a chum for some 2-player co-op. Go play it.