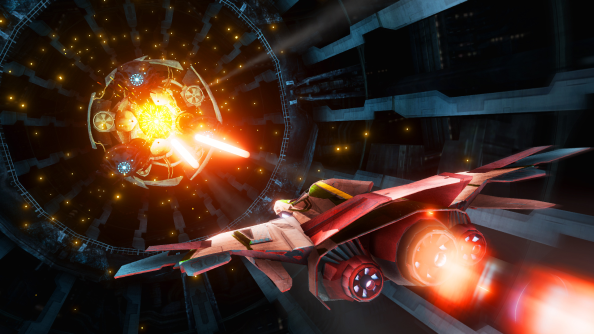 If you play any racing games you’ll have been subject to a number of tricks designed to simulate velocity: motion blur, camera shakes, cut sound, shifts in field-of-view – anything to make you feel the speed. Once you pop Rift or Vive goggles on, however, it turns out those tricks are no longer necessary.

Between all the best space games on PC, you can reenact everything good that ever happened in Star Wars.

“You’re in there, you see the obstacles speeding by right next to your face,” explains Jacek Malyszek, lead programmer at Shortbreak. “You know exactly how fast you’re going. Any additional effects would only work against that feeling of presence.”

The Collider 2 is about flying a spaceship through tiny tunnels, narrowly dodging obstacles and laser death traps. It’s that bit when you got bored with Flight Simulator and flew far too close to the ground in search of near-death thrills, reimagined as a 54 mission game.

There was a Collider 1 which did largely the same thing, but in an abstract setting more reminiscent of Super Hexagon.

“We think that abstract games present their own unique challenges to the developers,” says Malyszek. “You strip the game of most of its visual candy and focus just on the gameplay. For a game like that to succeed, you have to make sure it’s innovative and very tightly balanced.”

Which is what Shortbreak – a “separate, independent” studio within Techland – did. They built a hypnotic game in which you hurtled in first-person through brightly coloured tubes that could be particle accelerator, artery, or anything you liked. The Collider 1 garnered ‘Very Positive’ user reviews on Steam. But once the team began experimenting with headsets for the sequel, they decided to cast that abstract foundation aside.

“In VR, even when you’re in a menu screen, you want to feel like you’re in a concrete place, not just suspended in limbo,” believes Malyszek. “We wanted to include just a bit of a backstory in the second installment. This helped in establishing an ultimate goal for the player, as well as making them feel like they’re in an actual, real world.” 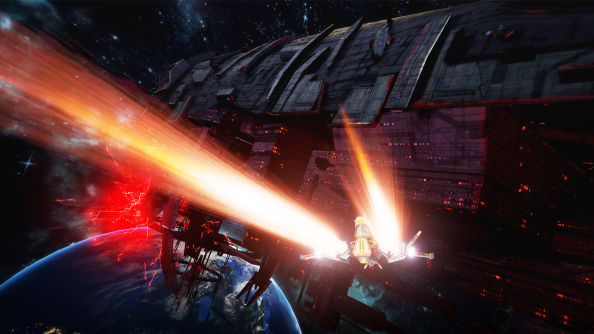 So we’re not simply whizzing through cylinders anymore, but directing starfighters to take down reactors and collect sensitive data from within the vents of an enemy vessel – eventually destroying a ginormous mothership hovering above our home planet. Although nobody at Shortbreak will be offended if you say ‘Death Star’ instead.

“As soon as someone came up with the idea of the setting, the trench run was the first thing everyone thought about,” says Malyszek. “It’s hard not to, really – most of us have been raised on Star Wars. We’ve made sure for The Collider 2 to be its own thing and not associated with any other franchise, but the core concept of a David vs Goliath kind of fight done with spaceships is there.”

Isn’t flying through a cramped space in VR a recipe for instant nausea? Apparently not. Shortbreak have opted for a control scheme that translates head movement into direction, with no “artificial limits or smoothing”.

“It’s almost as if your head was actually in the tunnel, avoiding the obstacles,” claims Malyszek. “It feels natural enough for the player’s brain to accept it and not get confused.” 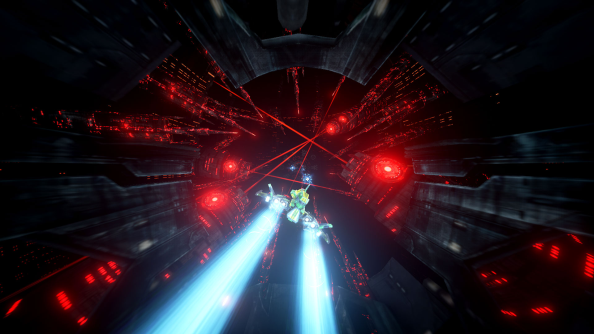 In the studio’s experience, simulation sickness isn’t caused so much by speed as acceleration. As long as they didn’t put their foot down too often, they were free to crank up the velocity as high as they liked without putting their testers out of action.

“I don’t dare venture too far into the science of simulation sickness, but it seems to be connected to how the human sense of balance works,” Malyszek hypothesises. “The semicircular canals in our ears detect accelerations, not speed.”

The job of a VR developer, the programmer reckons, is to make sure all the sensations flying at the player’s face match their sense of balance.

“If you present the player with a view from a rapidly accelerating car and they can’t feel the corresponding accelerations, they will get disoriented very quickly,” expands Malyszek. “But as long as the car moves at a constant speed, regardless of how fast, they should be just fine.” 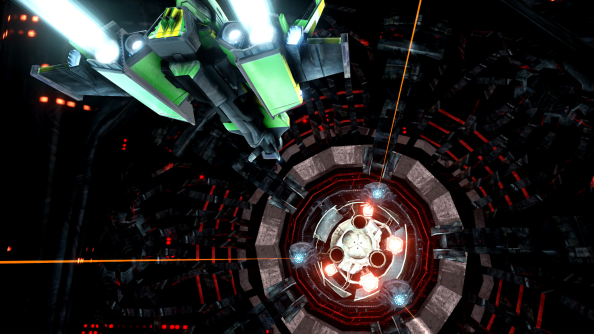 Shortbreak were able to prototype quickly in Unreal Engine 4, where support for the Rift and Vive saved the team “weeks, if not months” in implementation. Less than two years after The Collider 1, they’re enjoying another ‘Positive’ response on Steam.

“It’s very satisfying to hear from players who had thought this kind of game would never work in VR,” says Malyszek, “but changed their mind as soon as they tried it.”

The Collider 2 is available on Steam. Unreal Engine 4 development is now free.

In this sponsored series, we’re looking at how game developers are taking advantage of Unreal Engine 4 to create a new generation of PC games. With thanks to Epic Games and Shortbreak Studios.