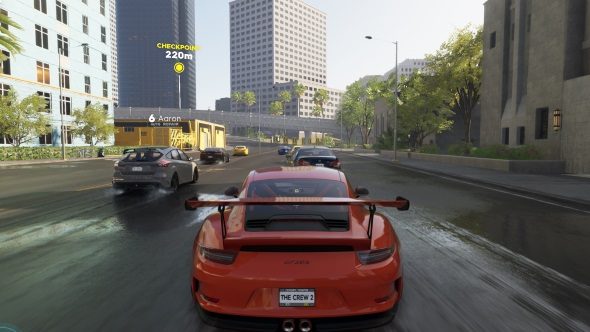 Ivory Tower returns to serve up another slice of sandbox racing with The Crew 2, and this time, you can tame the roads, skies, and rivers of its open world take on the US. But how good does The Crew 2 look on PC, and how does it run on a variety of rigs?

While commandeering planes, trains (alright, boats), and automobiles can be a hoot, the sheer scale of its world means visual compromises are to be expected. What we’re here to find out is just how big those concessions are, while also examining potential performance hiccups.

In this performance review we’ll be using a high-end rig with an Nvidia GTX 1080 TI to put Ubisoft’s racer through its paces at both 1080p and 4K across all graphics presets. As this machine has been assembled to run games at 2160p, we have also tested the game on a rig more in line with what the majority of PC players use, based on the findings of the Steam Hardware Survey. 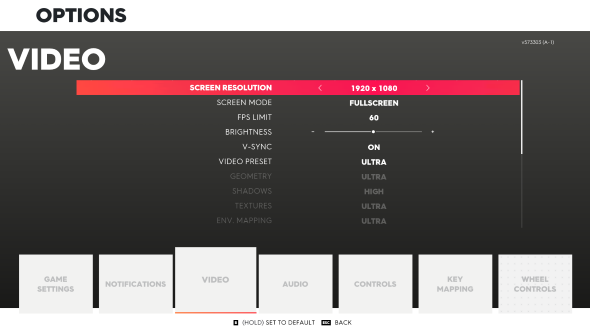 The Crew 2’s PC graphics settings are found predictably in the video tab on the main options screen. You have four main presets to choose from, spanning low, medium, high, and ultra. Curiously, none of the individual visual settings actually have an ultra setting, and instead, the ultra preset merely whacks everything up to high, while the high preset switches certain settings to medium. It’s kinda confusing.

If you’d rather obsessively tinker with the custom preset and tailor specific settings to your tastes, you’ll find a respectable number of graphics options. All the main techy bases are covered, such as FXAA anti-aliasing, ambient occlusion (either SSAO or SSAO+), and screen space reflection. You can also tinker with volumetric FX, as well as the level of grass and terrain complexity throughout the world. The most pleasant surprise? An FOV scaling slider designed for players rocking a three monitor setup. Kudos, Ivory Tower.

Although, that said, the studio should spend a few minutes on the naughty step for not including a benchmarking tool. It’s also disappointing there’s no support for unlocked frame rates, with the game doggedly sticking to either a 30fps or 60fps cap. If we’re going to nitpick, it’s a little annoying the menu doesn’t tell you the performance cost of individual graphics settings, too. Though in the racer’s defence, every option can be changed on-the-fly without reloading, with the game immediately implementing your settings in a flash.

For our graphics analysis, we compare similar screenshots taken on the four standard presets of ultra, high, normal, and low. As we mentioned, you can switch between these settings instantly, which proves a big time-saver. 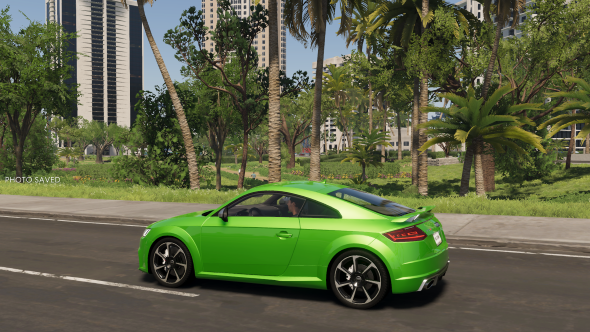 Let’s not beat about the bonnet: The Crew 2 isn’t a particularly good looking game, even on ultra settings. Is the scale of its sandbox world, which encompasses bite-sized takes on cities like Chicago, Las Vegas, LA, and Seattle commendable? Absolutely. But while the grand sweep of the game’s landscapes impress from the cockpit of a plane, the results at street level look shabby.

Played on ultra, The Crew 2 sports a fuzzy look, most likely owing to the overly aggressive FXAA. The majority of car models impress though, and at the highest setting a good level of grass, trees, and shrubbery gives the impression of a fairly verdant world. Still, regardless of what settings get ramped up, buildings lack detail, and general architecture (outside various famous landmarks) looks boxy.

At 1080p, our benchmarking tool reports an average of 59fps on ultra with our GTX 1080 Ti-powered rig. The minimum report is also 59fps, and considering the brute force of Nvidia’s card, it’s no surprise Ubi’s racer never makes our GPU break a sweat at 1080p.

Moving up to 4K, our UHD-grade test machine starts to perspire a tad, dropping to a (still respectable) average of 53fps. 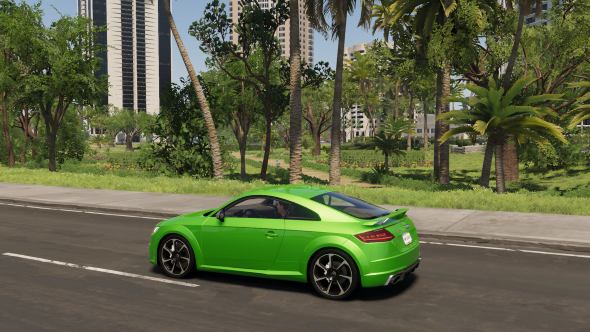 In motion, it can be damned difficult to tell the ultra and high presets apart. Level of detail throughout the world remains impressive, and as you can see above, there’s no immediately apparent drop in grass or foilage volume. If you’re rocking the clinical eyes of a Terminator, you may notice shadows are a little flatter. Of course, when you’re bombing down Miami roads at 75mph, you’re unlikely to notice.

A swift word of warning, though: The Crew 2’s dynamic weather system can hurt performance. When the heavens open and either heavy rain or snow starts to fall, don’t be surprised if you see drops of up of to 10-12fps. Boating up rivers (especially ones surrounded by heavy forests) can also cause frame drops, sometimes down to the high 40s if you’re playing on the highest two presets.

Our benchmarking tool measures an average of 60fps on high at 1080p, with a minimum of 59fps. As long as the weather is clear, our results are nearly identical at 4K, with the game sticking to a locked 60fps most of the time. When that Ultra HD rain starts to chuck it down, though, we see lows of 45fps at 4K on both high and ultra. 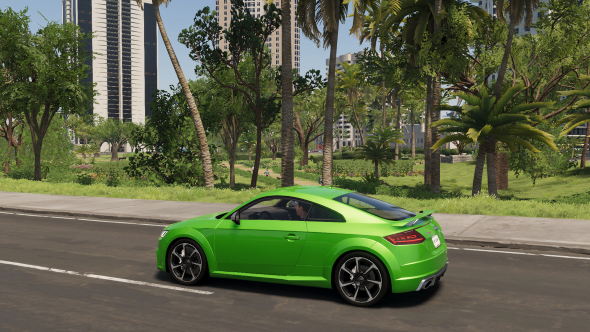 The middle of the road setting stands up well, and there’s certainly not a night and day difference in level of detail. In the scene above, shadows are noticeably paired back, yet you’re unlikely to notice this drop when you’re bombing down sun-kissed roads. While FXAA makes the game look overly soft it does at least do a good job of keeping jaggies at bay.

Our benchmark tool reads an average of 60fps on both 1080p and 2160p. Though our test machine is a monster, mid-range cards like the GTX 1060 should have little trouble handing in 1080p/60fps on The Crew 2’s normal preset. 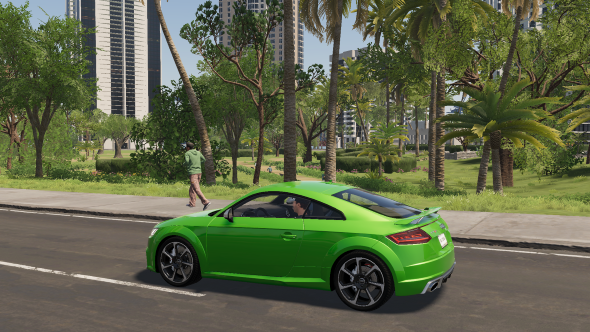 There’s a party in our eyes… and everyone’s going blind. Drop The Crew 2 down to its low preset and the cutbacks become clear. Without FXAA anti-aliasing, aggressive jaggies appear on our car, especially around the frames of our windows and rear lights. Nearby trees and bushes also look rough without AA in place, while bumping grass level down to low makes the adjacent park appear barren, with bushes becoming lumpy, lifeless blobs. Minus FXAA, the balconies on that tower block to the left basically become barbed wire. Yuck.

Shifting down from medium to low gives us the same benchmark numbers, with our 1080 Ti-powered PC hitting an average of 60fps on both 1080p and 4K. It suggests anti-aliasing has very little performance cost, so we’d advise keeping it on if you’re going for a custom preset.

To see how The Crew 2 performs on more modest hardware, we’re switching to our i5 rig paired with 8GB of RAM, then testing the game on four different graphics cards: two from Nvidia, and two from AMD. Each of these GPUs are tested on the game’s ultra preset, dialling up shadows, textures, environmental detail and every other setting to the max.

You can see how all four cards perform in the graph below:

As you can see, performance on even our mid-range PC build is pretty solid on ultra settings. Thankfully the game is optimised well enough that even the AMD R9 380 doesn’t lag behind too badly, but it’s a shame that we can’t maximise the power of cards like the RX 580 beyond 60 frames per second because of the frame rate lock. 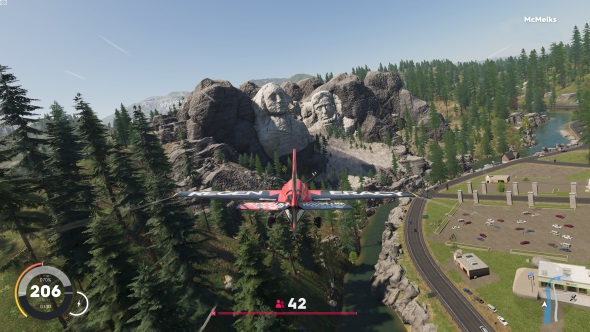 Looking to run The Crew 2 at Ultra HD? Anything above and including the GTX 1070 should be able to comfortably run the game smoothly at high settings as long as you enable the 30fps cap. Want to achieve the gold standard of 4K/60fps? Compromises are needed. If you’re after a locked 60fps then the ultra preset is off the table. Opt for the high preset, however, and you should be able to nail 60fps 95% of the time. The game occasionally stutters at 4K when making sharp turns, and extreme weather conditions sees our 1080 TI hit lows of 45fps playing at 3850 x 2160. Overall, though, The Crew 2 is a pretty good 4K performer… providing you own a beefy rig.

Considering there’s so little visual difference between high and ultra, we’d immediately plump for the former if you’re looking to run Ubi’s speedster at 1080p/60fps. If you own a mid-range PC sporting something similar to an i5 CPU and GTX 1060 GPU, hitting 60fps (at least in fair weather) should be achievable. If you’re still suffering frame rate dips, turn off ambient occlusion, as that’s easily the biggest drain on performance.

When it comes to PC performance, The Crew 2 never quite hits top gear, but it’s still a more than acceptable port. With plenty of tweakable graphics options, obtaining a reasonably smooth 1080p/60fps should be achievable for anyone with a mid-range rig. While it’s not exactly a looker, we’ve still come a long way since the days of barely functioning Ubi PC ports – we’re looking at you, Watch Dogs.

Ivory Tower has also included some thoughtful additions targeted specifically at the PC market. Black bars in menus and certain pre-rendered cutscenes aside means the game is happy to run at a full 21:9 for those with ultrawide screen monitors. Comprehensive key mapping is also welcome, though you’d be far better off using a controller or racing wheel – controls for the latter can also be adjusted in its own menu tab. The Crew 2 puts up a decent showing on PC, then, but even at 4K, this expansive sandbox is unlikely to wow your peepers.