Put on your pith helmet and hitch up those khakis because adventure simulator The Curious Expedition is launching out of Early Access today. Choosing from a number of historical figures from the 1800s – Marie Curie, Charles Darwin, Nikola Tesla and Aleister Crowley to name a few – you’ll mount a series of expeditions around the world in a quest to find a fabled collection of golden pyramids.

Mixing RPG, roguelike and strategy elements together, The Curious Expedition tasks players with planning their expedition, managing their group during the adventure and of course, getting loads and loads of good plunder. One of the hardest parts is keeping your group sane, because after one too many tiger maulings Tesla and co. start to become unhinged. Quickly. This gets much harder when your group start uncovering mysterious lands full of dinosaurs, though they make excellent mounts. 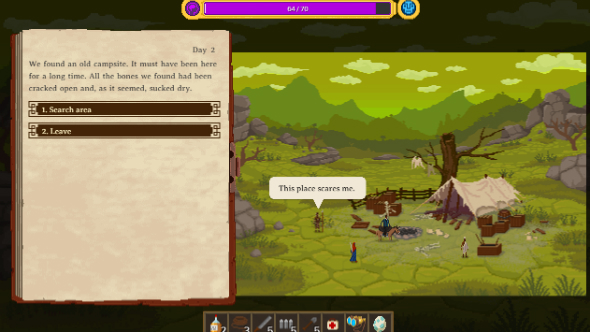 The Curious Expedition is the first game from Berlin-based indie studio Maschinen-Mensch, a small team made up of former triple-A devs, many of whom worked on Spec Ops: The line. It’s fitting then that like Spec Ops: The Line, The Curious Expedition also channels a great deal of Joseph Conrad’s The Heart of Darkness, with their Early Access launch trailer even ending with the narrator muttering: “The Horror! The horror!”

The game was initially released in May 2015 and has received a huge number of expansions and fixes during its time on the platform, selling 25,000 copies in the process. For more about The Curious Expedition, check out the game’s Steam page.