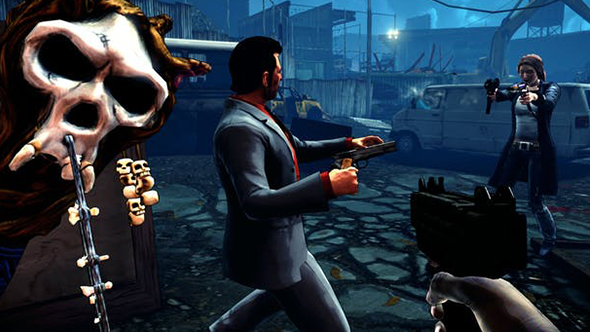 Before they were known as the makers of Warframe, Digital Extremes had a lengthy list of credits including everything from Unreal Tournament to Dark Sector and the multiplayer for BioShock 2. One of their often-forgotten titles is The Darkness II, a sequel to Starbreeze’s gritty comic book-based shooter. It’s a bit of a hidden gem, and now you have no excuse not to play it.

Here are the best free games on PC.

The Darkness II is free for the next 24 hours via the Humble Store. Just head to the page, claim the game, and it’s yours to keep. The key redeems on Steam for easy access.

You play as Jackie Estacado, a vengeful dude now in the midst of a war against a mysterious group called the Brotherhood. You’ve got a massive arsenal of weapons, but your most powerful tool is the Darkness, a demonic presence that grants you all kinds of extra bad guy-destroying abilities.

Digital Extremes are going strong these days with Warframe, which recently crossed a 40 million player threshold. If you’re looking to catch up on more of the DE story, there’s an excellent documentary now available which includes a heartwarming design decision about a Kubrow slot machine.