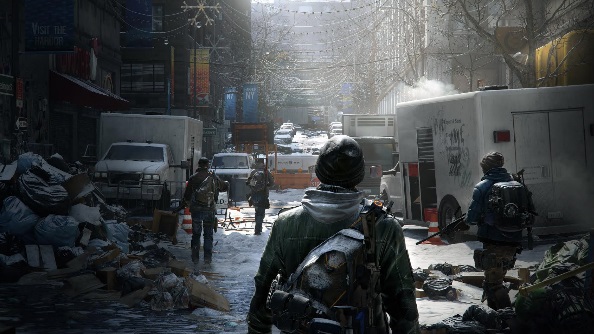 Wait, no. That’s not right at all. The Division is unlike any Tom Clancy game you’ve played before. That’s because it’s a big open-world RPG. Yeah, like those games with dragons, but this time it’s bio-terrorism instead. That may sound strange, but The Division is actually really good at being a role-playing game.

Here’s ten reasons why The Division is the next big thing in PC RPGs. 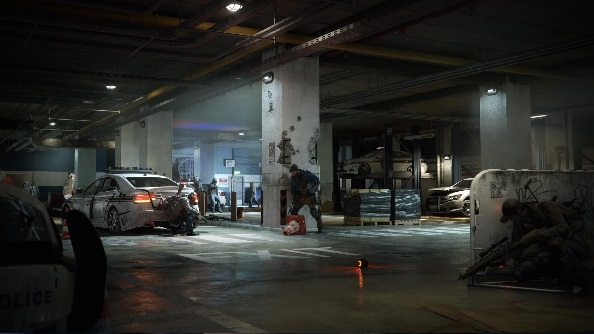 Let’s get one thing straight: The Division is an RPG. And I don’t mean it’s a third-person shooter with some upgrade stats: this is a full-out, numbers-led RPG to stand in the stables next to Diablo III and Borderlands. Both you and enemies have hit points, you can increase your weapon DPS by bolting on mods, and you level up by gaining XP for kills and quest completion. It’s even got a character creator. The only way it could be any more RPG is if Chris Avellone was writing it.

“From the beginning when we set out to do an RPG,” explains creative director Magnus Jansén. “We wanted to do something where your investment and your tactics matter.”

Because it’s an RPG, The Division’s combat is nothing like the one-hit-kill firefights of other Tom Clancy games. “To honour your [weapon and skill] choices, and doing tactical combat in the RPG setting, we’ve made some concessions to the absolute reality,” says Jansén. As such, enemies must be fired upon until their HP depletes, rather than simply double-tapped in the head.

“We keep you immersed with the fact that enemies have body armour and various things to explain why some people take a lot more damage than others,” explains Jansén in regards to the more bullet sponge-y enemies.

2 – It’s not competing with the MMO crowd 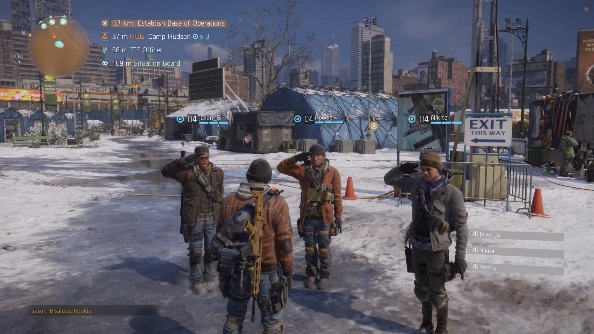 MMO’s have their definition in the title: massive, multiplayer, and online. While The Division is online and multiplayer, it’s certainly not massive in terms of players. In the questing zones of its Midtown Manhattan, you’ll be with just three other co-op players at most. Head into the Dark Zone – the highly contaminated PvP area at the centre of the map – and things get busier, but not by much.

“It’s not a crowded place,” reveals Jansén. “We want to keep encounters something interesting, so the Dark Zone is not crowded.”

The technical numbers behind the Dark Zone is support for about 20 – 24 players, but you’ll likely never see that many all in one area. “There are lots and lots of square miles, so we tried to fill that up with people to reach a certain density,” says Jansén. “You’ll walk a couple of blocks and you’re likely to maybe see one person. If you make a lot of noise, like during an extraction, then you’re likely to attract a handful of people, maybe one or two groups.”

Basically, your immersion in the world won’t be ruined by a server of 200 people teabagging corpses. 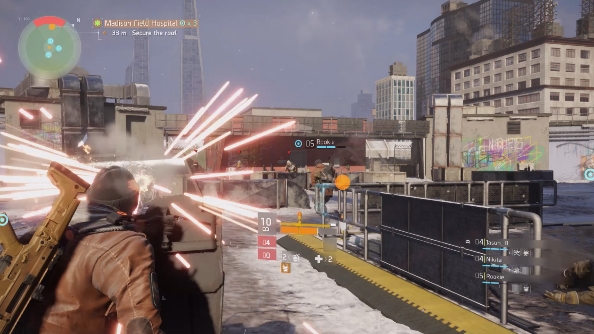 Did you know that The Division is real? Well, sort of. It’s based on Operation Dark Winter, a simulation carried out in 2001 by the American government to see how well the country would cope with a smallpox epidemic. The answer was pretty simple: we’re doomed. Society and infrastructure would collapse, leading to disaster in the streets.

That’s scary for us in real life, but it’s the perfect start to a Tom Clancy novel. Since Tom himself is no longer with us, it’s left to Ubisoft to tell the tale. For The Division, the epidemic all starts on Black Friday, with the virus being passed around on banknotes. Get it? It’s the downfall of capitalism thanks to rampant consumerism. Clever, eh?

Saving us all from anarchy are the agents of The Division themselves: men and women with access to tons and tons of military hardware, ready to shoot the heck out of those who would try and destroy America by looting the abandoned buildings of New York. Yup, this is a Clancy story alright. 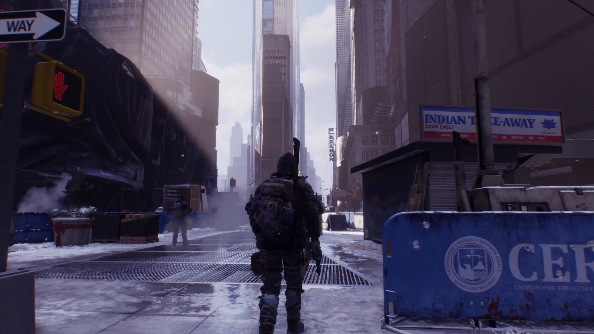 It’s mandatory to have an open world in RPGs these days, and The Division certainly has one. It’s a close-enough 1:1 recreation of Midtown Manhattan, complete with major spots like Madison Square Garden, Times Square, and the Lincoln Tunnel. Because of the strive for accuracy, you won’t find a single copy-paste street corner in The Division. And thanks to being a place that we all recognise, it goes beyond feeling hand-crafted to being genuinely authentic.

And thanks to that Black Friday zero-hour break out, the city is covered in a light dusting of snow that breaks realistically as you tread through it. Then there’s the twinkling Christmas lights: a beautiful touch that adds some much needed colour to the otherwise concrete grey city of New York.

5 – It’s been made for PC from the start 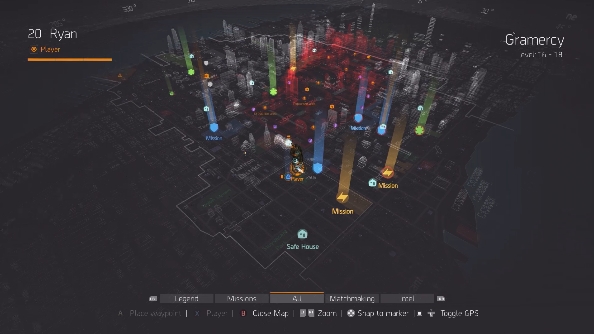 Ubisoft Massive have been clear on the fact that The Division has a PC ‘version’, not a ‘port’. This is not a game that’s been developed by one studio and then lumped off to another studio to hammer it into shape to work on a PC; from the very start, The Division has been made to be a PC game.

“It’s about considering things when you’re at the inception of an idea or a feature,” explains Jansén. “The very first time a thought or idea gets into the mind of a designer, they have think not only will this work with a controller, but will this work with a mouse and keyboard? It’s these things that go into all features. It’s a mindset.” 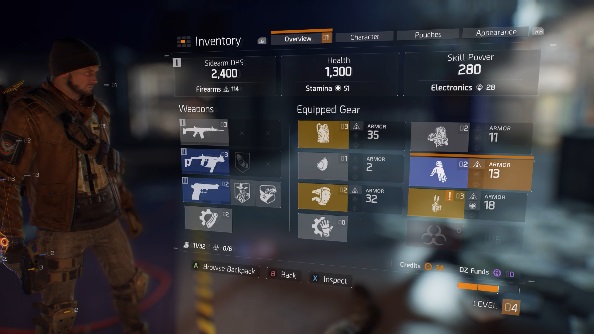 Thanks to that mindset, everything about The Division’s UI feels designed for PC. You can scale things like the minimap to your desired size, and move them around the screen. If you’re on a multi-monitor display, you can even shift much of the UI onto the screen of your choice.

Then there’s the inventory menus, that support click and drag to make equipping things far easier. You can even select multiple items by holding shift for things like scrapping many items at once. It feels like it’s making the most of the functions we have available on PC.

And of course there’s the graphics menu that’s pretty extensive. As you’d expect from all that, it’s a very pretty game.

7 – It rewards you for being bold… 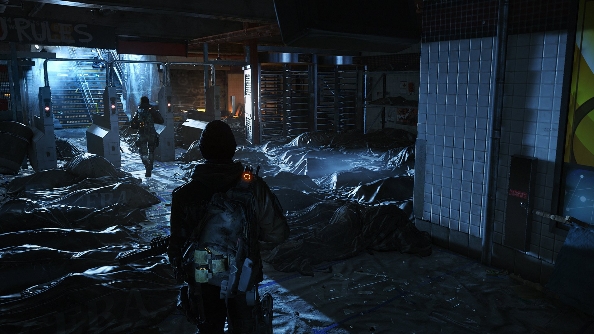 The Dark Zone is a free-for-all PvP district with shades of DayZ. It’s home to the best loot, but you need to extract it via helicopter to get it out of the zone (it needs a good clean before you can use it, see). Performing an extraction is noisy, and other players will know exactly why you’re doing it. They may want to take that hot loot for themselves, and can do by going ‘rogue’.

If you see someone with loot and decide to toe the moral line, it could be worth it. “When you damage a person, you acquire 30 seconds of ‘rogue’ and you have to sweat that out,” reveals Jansén. “When you do you’re home free off the hook. You have no penalty and you succeed with your evil deed. You get whatever spoils that you managed to steal from the person you killed and you’re off with no penalty, no loss of anything.”

8 – … but punishes you for griefing 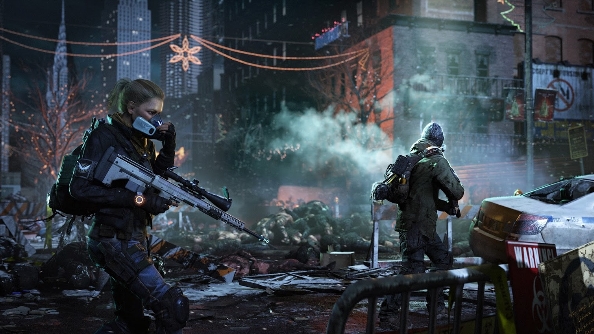 At first that sounds like the Dark Zone will be griefing paradise, but there’s measures to discourage anything more than the odd bit of murder. “If you’re killed when you’re rogue, not only do you lose whatever you had stolen and whatever you were carrying yourself, you also have a penalty to your Dark Zone XP,” explains Jansén.

See, in the Dark Zone, you have a second set of character levels which increases by gaining XP in the Dark Zone. There are containers filled with excellent loot in the area, but you need to be at a specific Dark Zone rank to unlock them. So going rogue can reduce your ability to access that loot.

That’s not the only penalty, though. “If your rogue level is high enough and you’ve been killing a lot, your bounty will be communicated to people in the area. Other players will see that there’s a really bad person, and they will get a great reward for killing you. So you will become a very hunted person,” smiles Jansén. “And of course the penalty for you failing to survive increases the more rogue you are. I’m sure some very disturbed individuals will find that to be a challenge which they accept, but there are definitely incentives against just going on an absolute rampage.” 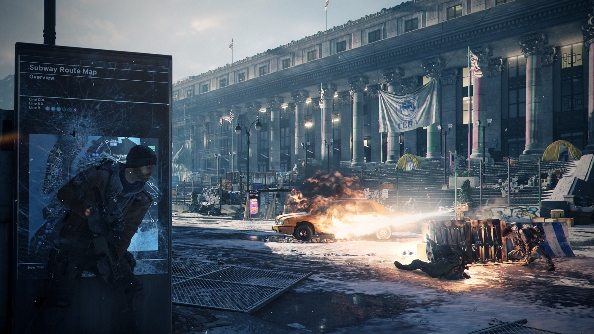 The Division may not be an MMO, but Massive are thinking along those traditional lines when it comes to the end game. “We want players to take what they’ve invested in their character and continue playing in the open world after they hit max level and the end of the story campaign,” reveals Jansén. “There will be something to strive for: new challenges and new goals that can keep them going for a long time.”

Quite how long support for The Division continues is likely down to how successful it is. But right now, Massive “have plans for about a year” with a selection of free updates and paid-for DLC.

10 – It’s going to have PvE beyond the campaign missions 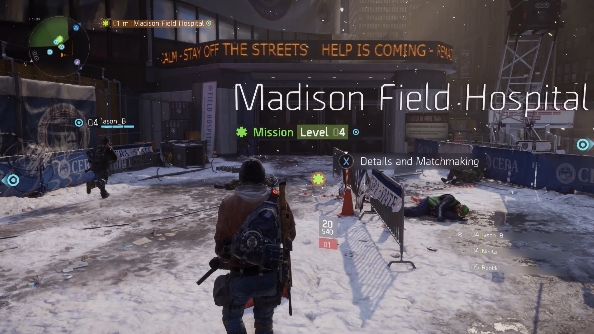 Much of that end-game content will take place in the Dark Zone. As it’s a PvP area, it’s pretty easy to gain a lot of life from there as multiplayer can’t ever really ‘end’. But Massive are not expecting you to simply amuse yourself by hunting loot and going rogue.

“We do have PvE end game… it’s not all Dark Zone,” teases Jansén. And that’s all he’ll say. Will PvE end game be part of the base game? Will there be PvE DLC? Who knows. But it’s there, alright.