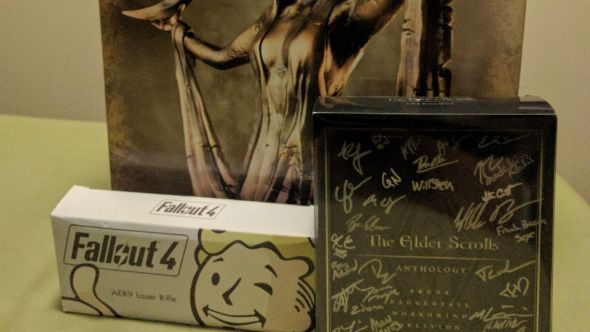 Update May 18, 2017: The man lucky enough to survive a stray bullet via a copy of The Elder Scrolls Anthology has posted what Bethesda sent him. It’s some good stuff.

As one member of Imgur’s commenting community noted, this guy dodged a bullet and won the lottery.

Warning – no guarantees that the following list of PC RPGs will take a bullet for you.

A lovely gallery is over on Imgur with everything Velorok received, but here’s a list:

Some random in the Imgur comments also bought Velorok a desk, because the world is nice like that. We don’t recommend getting shot at, but if you do, this is how to recover properly.

At first, RabbitMix thought that the explosion was just the sound of a light bulb bursting, but the sizeable cloud of drywall dust in the air tipped him off to something more serious. Casting his eyes along from the initial bullet hole, he found a large rip within his copy of The Elder Scrolls Anthology, with several of the discs completely smashed. Destroying Bloodmoon, Tribunal and Construction Set on the way in, RabbitMix eventually found the bullet surrounded by the remnants of his Morrowind disc. Speaking to PC Gamer, RabbitMix stated that “it’s kind of poetic that my favorite game, a game that I’ve given over a thousand hours of my life to gave its life for mine.” You can see his disc’s heroic sacrifice in the image below. 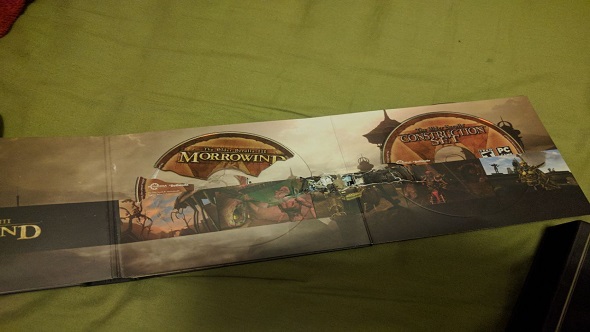 His copy of Oblivion only survived as it was still in his computer and by tracing the path of the bullet, RabbitMix only survived thanks to the box taking the hit. As for the source of the shot, it looks to have come from his neighbours next door. By all accounts, the gunshot was accidental, but RabbitMix’s landlord has offered to move him and his roommate to a better unit that doesn’t have it out for Bethesda RPG anthologies.

Bethesda have responded to RabbitMix following this incident, offering to replace his copy of The Elder Scrolls Anthology for free. Bethesda’s VP for marketing Pete Hines has even chimed in on the incident, stating on Twitter that Bethesda can probably do “a little better” than simply offering RabbitMix some free card packs for The Elder Scrolls: Legends as compensation.

While it may have saved RabbitMix, we do not recommend using copies of The Elder Scrolls Anthology as bullet-proof armour.