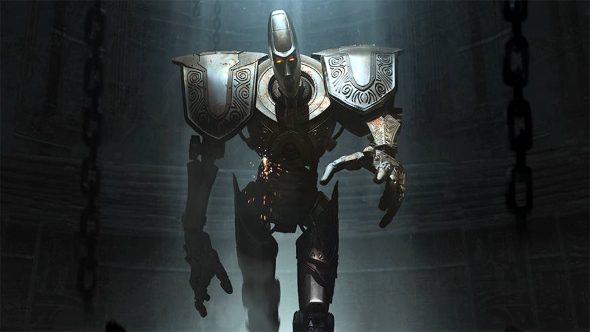 Hot on the heels of their latest Elder Scrolls Online expansion, Bethesda are keen to keep up the fantasy robot aesthetic, as their next expansion for the Elder Scrolls: Legends CCG is returning to the very same clockwork city that players have only just finished hacking and slashing their way through.

Return To The Clockwork City will be a mostly story-focused expansion, giving players another 35 missions to complete, and rewarding successful players with another full deck’s worth of cards; 55+ new types in total, many of them built around a fun new gameplay mechanic.

The explosive growth of the card game market has brought some truly must-have games to PC. Here’s some of the best.

The fanciest of the cards coming with this expansion seem to be the five Fabricants – one per attribute – weird cyborg critters (creations of a god with aspirations of blacksmithery) that gain significant buffs if you have neutral cards – such as Dwemer constructs – in play. Definitely deck-defining stuff, and good encouragement to dust off your neutrals.

Outside of that, there’s a whole bunch of new purely mechanical creature cards being added to the mix, and many of them being robotic Factorum units built around the new Assemble mechanic. While initially underpowered for their cost, Factorum units let you choose from one of two possible Assembly perks when played, applied not just to that card but all other Factorum creatures you have in play.

The end result is an unusual playstyle where your opponent will probably maintain the upper hand if they can knock down your troops as they’re summoned, but given a turn or two of relative peace and you’ll create a cross-synergised mass of high-powered death. Once that ball is rolling, it just doesn’t stop. A heavily telegraphed strategy with a clear solution, but dangerous if you can find some way to mitigate early knockouts.

The expansion will be released on November 30th, and can be purchased with either in-game currency on a per-act basis, or pre-ordered now as a bundle of all three acts for $20, and get a bonus alternate-art Laaneth card thrown in.