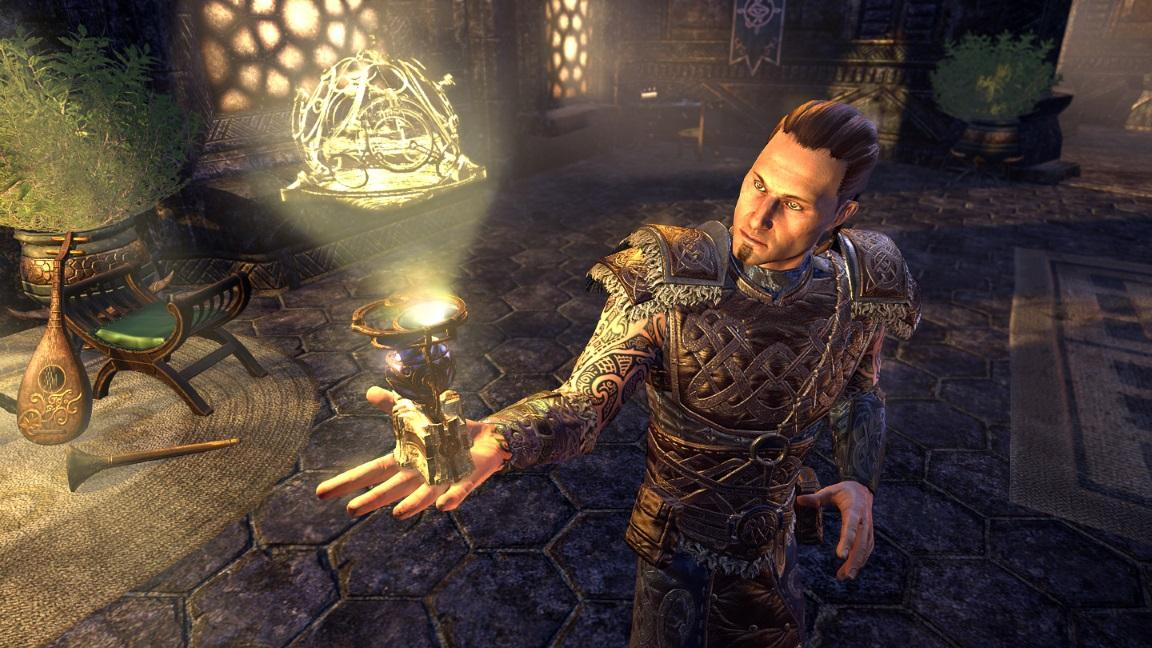 Today, The Elder Scrolls Online’s loading screen is a theatre curtain. Behind it, the Clockwork City is unpacking – the set and props of the game’s newest location being laid out, piece by piece. It is tempting to imagine the city whirring into being in the same fashion as Game of Thrones’ opening credits.

“So we’re going underground?” I ask the two Elder Scrolls developers acting as my guides through the DLC area.

“Er, sort of,” Leamon Tuttle, the zone’s principal writer, says. “It gets wacky.” 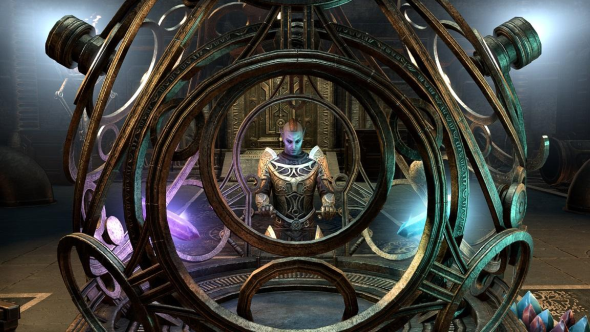 To be specific: the entrance to this hidden city does indeed lie underground, in a vault beneath Mournhold, Morrowind. But that entrance is less a doorway and more a sort of high fantasy snow globe. To enter is to be magically shrunk to fit its tiny glass dome. Or to become part of a “metaphor made manifest,” to quote lead content designer Jeremy Sera. To be quite honest, nobody seems 100% clear on what or where the Clockwork City is.

“We put it on the map near some of the Daedric realms,” Sera says. “Because it fit there better.”

That scribbling noise you hear is the sound of writers making all the necessary excuses to justify a place they are desperate to take you to. Where some of The Elder Scrolls Online’s DLC choices to date have felt predictable, even inevitable – Morrowind, a Thieve’s Guild, the Dark Brotherhood – this one is a flight of fancy that sees ZeniMax Online stretch their creative muscles.

“It’s so drastically different from the fantasy settings we’ve been in,” Sera notes. “It’s a chance to scratch the steampunk-inspired itch.” 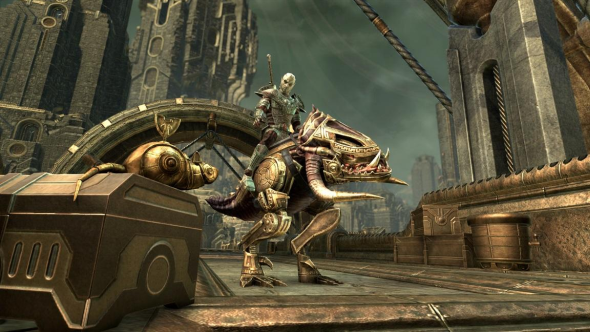 ZeniMax have given existing ESO players plenty of reasons to come here. Roughly the size of the Dark Brotherhood’s Gold Coast, with a storyline to match, the Clockwork City is home to the game’s first ‘mini-trial’ – a slightly friendlier version of ESO’s hours-long, 12-player endgame challenges. Perhaps most alluring to veterans is the new transmutation system: a way of permanently altering the traits of your items. And it just so happens that there is a transmute station in the bowels of the Brass Fortress, the Clockwork City’s urban centre.

The Brass Fortress is not where we begin, however. Instead, I join Tuttle and Sera in the Radius. After stepping out of a Wayshrine encased in cogs, there is little in the way of clockwork in the city outskirts. But giant turbines turn in the distance. And there, on the horizon, is the tower of the Clockwork Basilica – itself resembling a spiralling piece of cogwork.

“The centre of the wheel,” Tuttle explains. “Everything revolves around it.”

Even the sky is mechanical – a celestial dome with gigantic metal parts ticking across its surface. Stare too long and it feels as if you might be looking out from behind the face of a watch.

“It’s ostensibly the sky, but it’s really a weird replication,” Tuttle says. “Because everything in Clockwork City is designed.”

Look closer at the vegetation in the Radius, in fact, and you might notice it appears to be made from coarse wire. The wildlife, too, is part-machine. There is nothing wholly organic here. Sotha Sil, the tinkerer god of the dark elves, has curated every nook and cranny of this world – placing each rock. Which, of course, is what ZeniMax do. Perhaps Sotha Sil is best thought of as an uncompromising level designer.

“He is one of the cool things about going into this zone,” Tuttle enthuses. “A lot of it was mystery. Not many people knew the ins and outs of what his motives were.”

While the Clockwork City has featured in the Elder Scrolls series once before – in the Morrowind expansion Tribunal – ZeniMax have found themselves filling mostly blank pages in Bethesda’s lore. The clockwork echoes some of that seen in Skyrim’s most grand and atmospheric dungeons, the Dwemer ruins. But even that point of familiarity has been altered by dark elven design – Sotha Sil both emulating the Dwemer and using their work as a springboard for his own ideas. 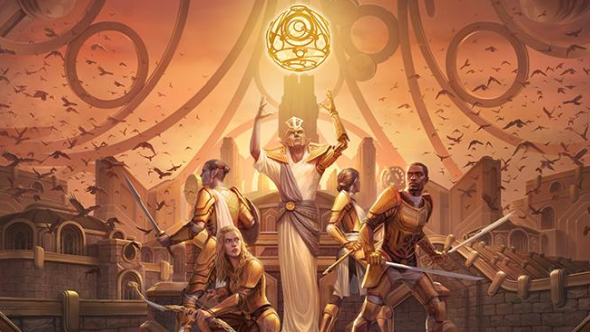 Following the road to the Brass Fortress, the City comes alive, as if everything is in motion.

“This was by far our most animated zone,” Sera admits, “because of all the mechanisms in it. And actually at one point it was a metrics concern.”

The artist responsible for much of the Clockwork City’s conceptual work, Mat Weathers, is a classic car enthusiast. I saw no actual carburetors in the Fortress but the expertise shows. Rather than tack bolts onto everything, ZeniMax have given every part of their city an implied function.

“Many of the objectives deal explicitly with things the devices do, or no longer do for whatever reason,” Tuttle says.

For a god determined to build an entire realm that ticks to his rhythm, Sotha Sil has been inattentive. Much of the Clockwork City is in a state of disrepair. ZeniMax let on that the elf god goes into seclusion from time to time – sometimes for six months, sometimes 60 years. 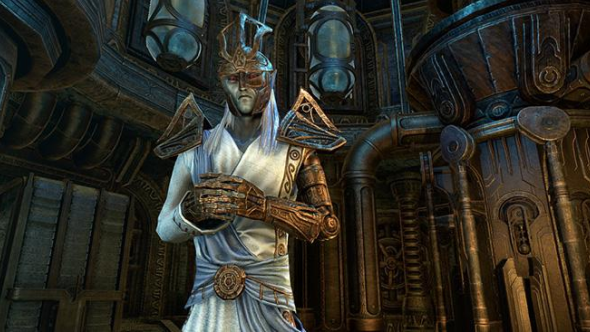 In his stead, mechanical servitors and Clockwork Apostles – organic races with metal limbs, modified as a sign of reverence – maintain the machine. Beneath the tower of the Basilica, they obey the tenets of The Truth in Sequence. Their scripture encourages drive: to achieve new things, find new truths, and push the limits. This is religion as science and magic; a place where contradictions thrive.

“In religion, a lot of times it’s tough to find that balance between faith and skepticism,” Tuttle suggests. “This is a place where they combine those two.”

But not every cog fits the machine. In Slagtown, the slums of Clockwork City, you will find the people without purpose. They eke out an existence, fittingly enough, among the broken machinery. In fact, there is a suggestion that the City, exquisitely designed though it is, does not fully satisfy its flesh and blood residents. One quest sees you sent to find spices, since the Nutriment Paste that everyone here subsists on tastes only as good as it sounds. 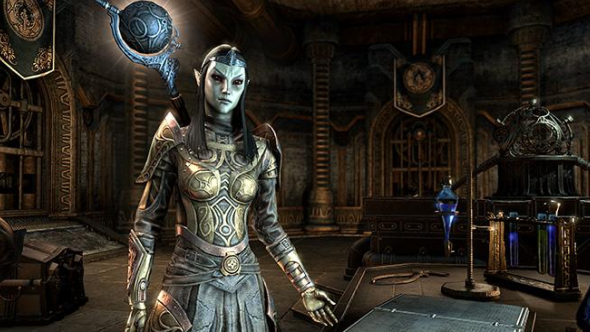 “That’s actually been one of the inspirations for a lot of the quest content,” Sera says. “How do flesh and blood people survive in an environment entirely made of metal?”

What sticks with you is the magnitude and meticulousness of the undertaking. From the 70-odd new books written on steel plates that rotate hypnotically in the Hall of Refined Techniques, to the everyday MMO furniture that ESO’s artists have recast all in metal – barrels, crates, tables, tents – the Clockwork City is an absurd idea made real. You have to wonder if ZeniMax have a little Sotha Sil in them too.