It’s impossible to approach The Elder Scrolls Online‘s next chapter without its single-player sister game in mind. Skyrim is so embedded in the RPG games sphere that even non-fans can probably recite a certain catchphrase about career-ending arrows in guards’ knees without blinking.

And it’s true ESO shares much of the same DNA as TES. Creative director Richard Lambert previously spoke to us about how closely the parallel dev teams work to ensure the intersection of their projects is seamless, as part of a shared universe and canon. At the same time, however, the distinction between their genres – MMORPG and single-player RPG, respectively – is crucial. The gameplay experience offered by each is very different; the playerbases do not necessarily overlap.

TES5 has carved a very particular, very sacred portion of my heart for its own, so ESO’s new year-long adventure, The Dark Heart of Skyrim, is an enticing prospect. It will go much further in exploring the region than the original eastern portion included at ESO’s launch. The chance to return to Tamriel’s chilliest zone again, this time with a year’s worth of new content to conquer, has my mouth practically frothing. But, I wonder, how will the world I know and adore fare as an MMO? Delving into a test build of the new Greymoor chapter seems like a pretty good way to find out.

There’s an enormous amount of content to consume in Greymoor, as fans of ESO’s quarterly expansions have come to expect. There’s around 30 hours of new questing, Lambert tells me at the beginning of a demo presentation. Better get started, then. 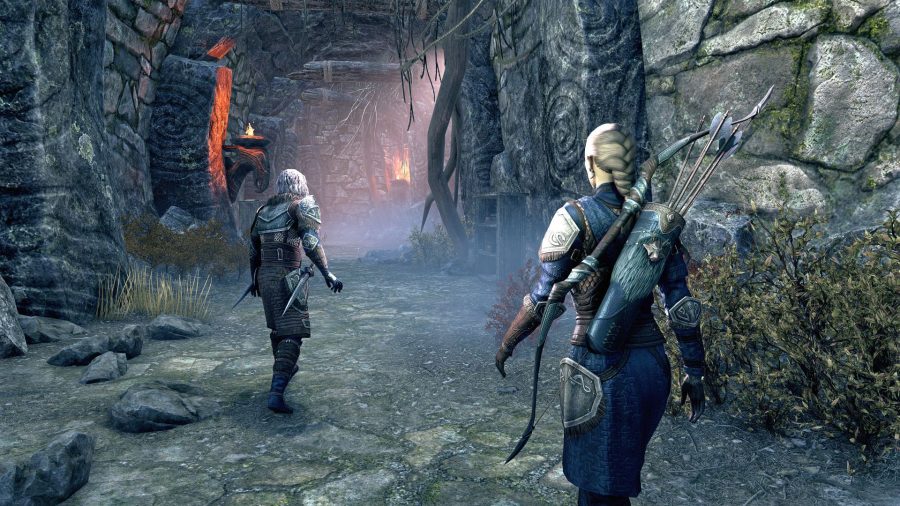 I begin my foray into the familiar land at a waypoint just outside Solitude, majestic capital of western Skyrim, the chapter’s setting. Though nearly 1,000 years younger than the single-player version, it’s utterly identifiable and just as imposing. As I enter the city’s gates all of the regular sights are there, including the Blue Palace looming at the far end, though it’s awash with new quests and opportunities signalled by flyers pasted everywhere.

One I’m particularly drawn to introduces Antiquities, a brand new system that lets you discover your inner Indiana Jones. “See the world! Recover forgotten relics! Solve ancient mysteries! Dig things out of the dirt!” the flyer reads. Well, if you insist. I head to the Antiquarian Circle’s headquarters and am admitted into their scholarly ranks once I’ve proven I can find my way around a new magical item, the Antiquarian’s Eye. This lets you scry for Skyrim’s lost relics, the possible locations of which are then flagged on your map for excavation.

In the process, you participate in the two new types of minigames to discover the treasures – for example, one gets you matching a sequence of ornate tiles against the clock. They’re pretty good fun, and a great way of marrying the series’ extensive, slightly overwhelming lore with a lighthearted activity not based on questing or killing. 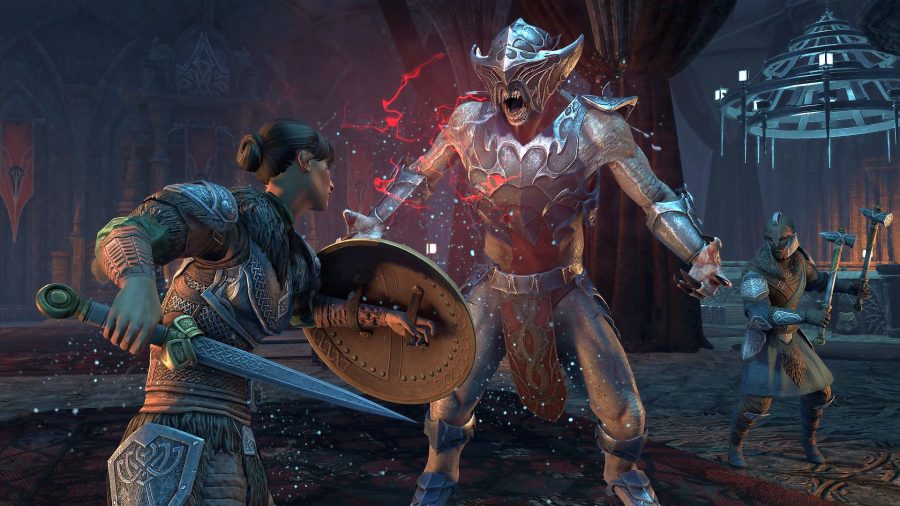 Relics come in a range of difficulties when it comes to the hunt and there can be multiple possible dig sites to narrow down, giving you an excellent reason to explore every inch of the open world. Plus, there are some decent rewards on the table for deciding to major in archaeology: housing items, gear, emotes, other cosmetic goodies, and Mythic items, which carry hefty bonuses for your character. To give you an idea of how hefty, you’re only allowed to equip one Mythic item at a time. They’re worth chasing down.

Venturing into the open world beyond Solitude, I’m struck by how familiar it feels. I pop into Shadowgreen Cavern, for example, and suffer a fate I’m well used to: being lynched by angry Spriggan, bears, and brainwashed wolves, screeching past them to get a look at the magnificent forested cave before turning on my heels to get the hell out of there, like a hero. It looks and feels as I hope, even as I’m a few bite marks worse for wear. I also have a burst of nostalgia as I spot Dragon Bridge and Morthal on my travels. Ahh. 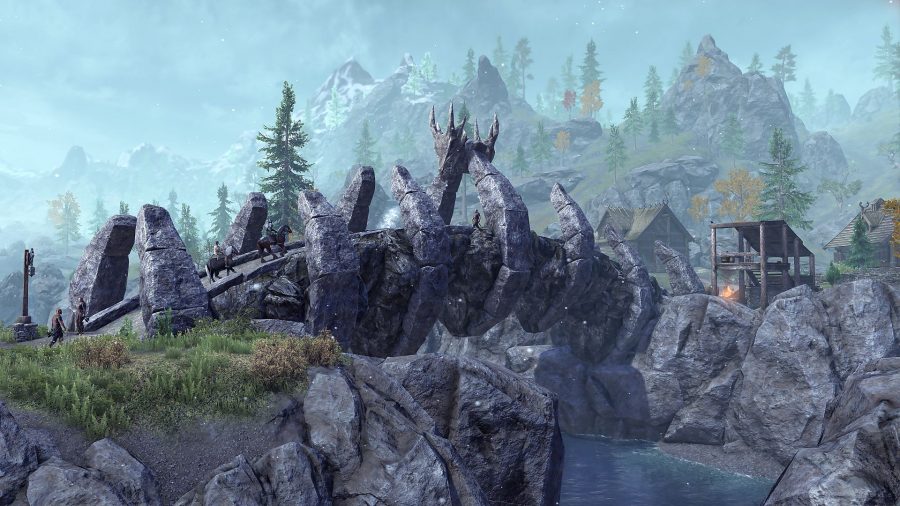 As I venture further west, however, I begin to encounter something less familiar engulfing portions of the craggy, snow-swept landscape: the downright ominous Harrowstorms. Reminiscent of The Elder Scrolls IV Oblivion gates, these churning vortices are found across the map and turn the skies nearby an angry red, unleashing “ravenous monsters” and “mindless zombies” in packs.

In my encounter with a Harrowstorm at the Chillblain Peak Ritual Site, lost souls, enormous Vampire Harvesters, and other supernatural monstrosities rage at me, quickly dispatching my low-level archer. Sadly, as I’m playing a sparsely populated test build solo, I’m not able to overcome the menace alone – but I do walk away with an appreciation of just how meaty a challenge Harrowstorms present. They’re what you’d expect of a good MMO world instance; nothing particularly unexpected, but tricky in the right ways, and perfectly at home in Skyrim’s hostile environment.

Thane Ogvar informs me of the "blood-drinking beast. A fiend of ice and fog": Lord Falgravn

The new 12-player PvE trial, Kyne’s Aegis, is a similar story. The quest is accessed via a waiting boat nestled at Skyrim’s northern shore, not far from where Icewater Jetty will take you to another vampire stronghold, Castle Volkihar, in the single-player Dawnguard expansion. Once there, Thane Ogvar informs me of the “blood-drinking beast. A fiend of ice and fog”: Lord Falgravn. The vampire lord’s longships have arrived to invade the storm-battered isle, along with a host of Sea Giants and “their howling half-kin”, which are “half again taller than the tallest Nord”. Let me assure you, these foes are as colossal and terrifying as they sound.

“They’re not simple like the Giants on the mainland,” Ogvar tells me. “No, they’ve got a cunning to them.” That, and a penchant for beating soldiers to pulp with their clubs. Gulp.

After some shameless, procrastinating chatter, I head in. Before long, I’m stormed by waves of these tougher-than-tough mobs. Half-Giant raiders loom over me, armed with especially pointy clubs, alongside their blood-sucking brethren. Lambert previously revealed this chapter’s vampiric forces present a similar level of challenge as the dragons of last year’s Elsweyr adventure, and he wasn’t kidding. Needless to say, I don’t last long or endure much of the three challenging bosses the mission boasts – but, boy, do I want to head back to the fight for the full experience when the chapter launches. 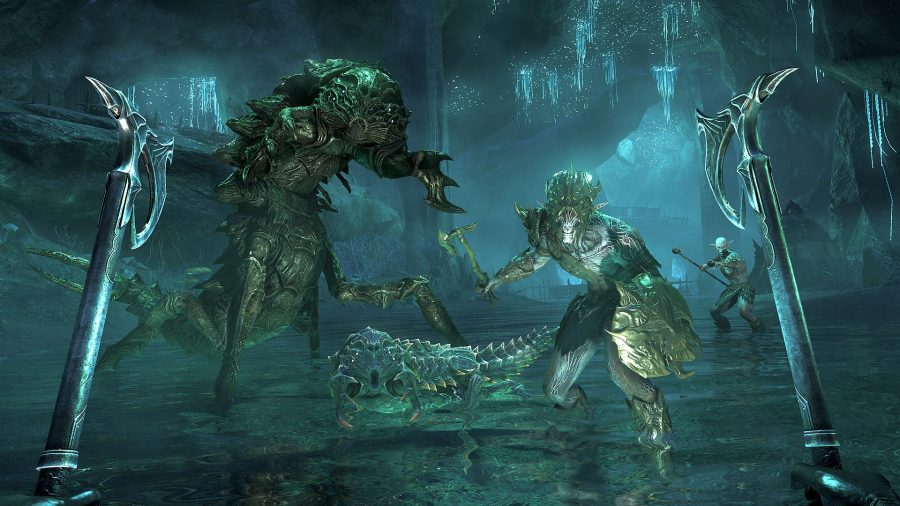 The foes offer a gritty, aggressive melee challenge best tackled head-on and with a gung-ho zeal, but with supernatural twists. Vampires throw all their special tricks at you, and the need for a proper team fleshed out with healers, tanks, and DPS players is clear. Like the Harrowstorms, the trial feels familiar, tried-and-tested territory, but the two enemy types – the Sea Giants with their brute force approach and vampires with their “cunning” – combined add something new and spicy to the mix. For the short time I’m in, I’m kept on my toes.

I bow out somewhat gracefully after several attempts, in the knowledge that tackling the trial short-staffed is foolhardy. I guess I’ll return to resume my fight against Lord Falgravn another day. Oh well, back to the mainland. It’s time to take a look at Greymoor’s chief attraction, the Dark Heart of Skyrim itself: Blackreach.

If you’re a Skyrim stalwart, you’ll remember the immense, cavernous, cathedral-like zone beneath the land of the Nords. In Greymoor, it’s even greater, accounting for 40% of the playable land mass in the chapter. I sadly wasn’t able to access Blackreach first-hand, but demo footage supplied by the studio makes it clear the area is quite unlike anything you’ll have seen in ESO until this point.

In the relative darkness, and without the kind of landmarks that punctuate the top level’s horizon, you’d think Blackreach would be difficult to navigate, but, as Lambert reveals, the ESO team has introduced several different biomes into the vast Dwemer underground. There are various rock formations, structures, colours, flora, and fauna to encounter, giving each area within its own distinct flavour. 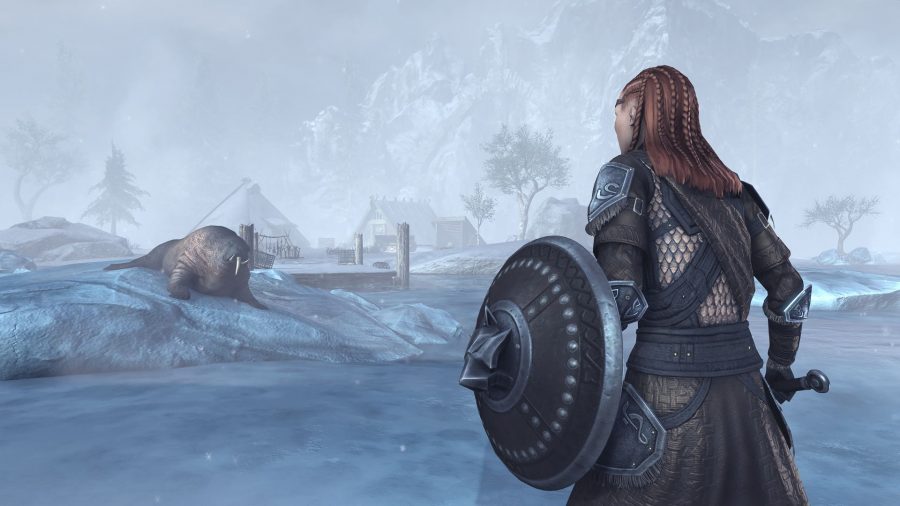 Blackreach isn’t just populated with the Falmer and Chaurus you expect, either; the light-averse Vampires and Death Hounds have made it their lair, along with some… others who have established a settlement down there, hopefully not warped by all that time spent deep beneath Skyrim’s surface. Hmm.

While it’s clearly different to the Blackreach I know, its size and labyrinthine network of caves are pretty astonishing, and a sound compromise between the single-player game’s blueprint and the MMO’s offer of a new adventure. It might not be some fans’ favourite location in TES5, but if you’re of a mind to see what else lies below Tamriel, I recommend heading there first. It’s what I’ll be doing.

Given the expansion’s enormity, there’s plenty more to explore I can’t fit in during the demo, such as its many new quests. I begin several, including one requiring you to help a man who has been magically condensed into a ‘peculiar bottle’ that talks, and another that gets you following cryptic clues to uncover a mystery and solve a murder. I even encounter a poor NPC searching for her lost pet mammoth, Muffins, at one point. I begin to ponder just how many septims a safe return is worth before sensibly dodging that task. 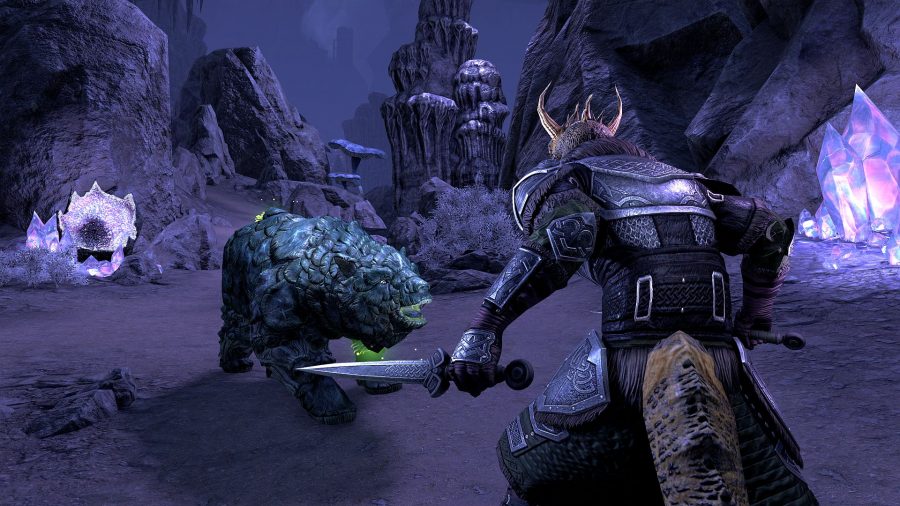 There’s also plenty of bounty – six new armour sets, achievements, and other items to scoop along with the Antiquities’ relics and Mythic items – as well as public caves and dungeons to plunder, and a rework of the Vampire skill line to anticipate when Greymoor launches.

Given what I’ve seen so far, I’m cautiously excited to head into the live chapter and tackle the adventures as they’re intended. For me, Greymoor can’t be a true substitute for the original, but it’s an exciting, and welcome, bonus return to Skyrim. Along with many other TES5 fans, I’m sure, I’m very glad of the opportunity.

Greymoor launches on May 18 for PC.