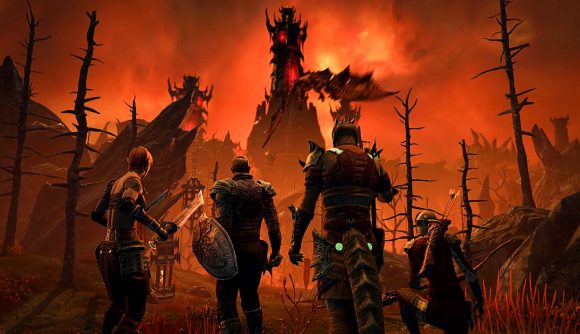 Nvidia’s proprietary AI upscaling technique, Deep Learning Super Sampling (DLSS), has made its RTX 2000 and 3000 series products some of the best graphics cards available to buy, provided you can find one. In a recent livestream, Elder Scrolls Online creative director, Rich Lambert, revealed that not only would the MMO soon benefit from DLSS but would also serve as the debut title for Nvidia’s new Deep Learning Anti-Aliasing (DLAA).

Nvidia DLSS is viewed as something of a gold standard for image upscaling solutions, despite competition from AMD with its open source FidelityFX Super Resolution (FSR) while Intel’s upcoming XeSS still needs thorough testing. DLSS uses AI to reconstruct images from a lower resolution, allowing games to render at higher resolutions with higher levels of performance than would otherwise be possible with native rendering.

Elder Scrolls Online joins the growing number of games to support DLSS but will be the first game to support DLAA. Alex Tardif, lead graphics engineer at ZeniMax Online Studios, took to Twitter to give an overview of how DLAA works and the benefit it offers players.

Tardif explains that DLAA uses Nvidia’s deep learning technology, “but without the upscaling component, at full resolution for some fantastic AA quality.” It remains to seen how exactly the same deep learning used in DLSS translates in improving image quality at native resolution via DLAA and how it compares against other popular anti-aliasing techniques such as temporal anti-aliasing (TAA).

We are adding a new option for NVIDIA DLAA (Deep Learning Anti-Aliasing), using their DL technology, but without the upscaling component, at full resolution for some fantastic AA quality. On RTX cards people run ESO at high fps already, so a pure AA option works well! (2/3)

Players with applicable Nvidia cards will soon be able to test both DLSS and DLAA on Elder Scroll Online’s Public Test Server with an expected rollout to the live server in the near future. If you aren’t an Elder Scrolls Online player then we suggest you keep an eagle eye out for any updates relating to DLAA support for existing and upcoming games.