Stonethorn is the third episode in The Elder Scrolls Online’s Dark Heart of Skyrim year-long adventure, and it shines a light on a whole other side of Tamriel’s frostiest region. Where the adventure’s first chunk, Harrowstorm, was all about Nordic burial grounds, the Icereach dungeon, and supernatural storms – basically, what you’d recognise as quintessentially Skyrim – Stonethorn is gothic.

The new pack centres on two dungeons that bask in the gloom and grotesque of the gothic genre. Stone Garden plays host to a “mad alchemist, hidden deep within a secret, mysterious laboratory” in Blackreach, whose “horrifying creations” you need to put down. Castle Thorn is an ancient fortress lodged in the hills of western Skyrim, ruled by a megalomaniac vampire lord, and packed with more beasts and pointy buttresses than Bram Stoker’s dreams after a cheese board. But what lies within these dungeons goes beyond ‘stock’ gothic fare, and brings new and invigorating challenges to the MMO.

Freely spoiling the surprise, the devs explain that the foreboding castle features a familiar face: Gwendis, the ‘good’ vampire from House Ravenwatch. Those are the ones that hunt down other, nastier members of their own kind. Best of all, if you’ve encountered her in the past, she’ll recognise you – and won’t bite. She explains that, after years of silence, the ancient vampire Lady Thorn is stirring. She’s building an army, and we need to put paid to that, pronto. 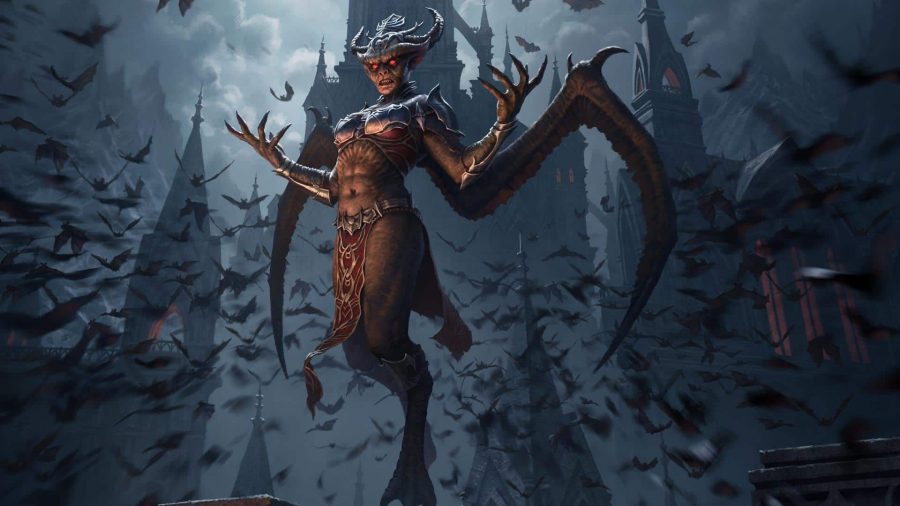 As I enter the castle, supremely gothic architecture towers above, while at ground level weather-worn gravestones and crypts clutter a stony courtyard. It’s inspired by classic vampire movies, the devs explain, but not being a fan of Hammer Horror, it reminds me ofFable 3’s Ossuary. It also far surpasses Castle Volkihar, the vampire stronghold in Skyrim’s Dawnguard expansion, in both scale and style.

Once inside, I encounter a ragtag mixture of Lady Thorn’s lowly recruits: clawing Bloodfiends (“starved vampires”) and snarling death hounds, which give my clicking finger a healthy warm-up for the baddies ahead. Before long, it becomes clear that the Lady has travelled all the way to the Khajiit homelands in her many centuries of life (undeath?) because, lo and behold, there’s a bloody great vampiric Senche-raht lurking behind some tombs. The feline monstrosity packs a punch, with AoE attacks that involve slamming its four meaty paws onto the flagstones, splaying damage outwards in spirals.

On your path to stop Lady Thorn are five surprisingly varied bosses, each with their own set of tricks. The first is an enormous breed of death hound called a Dread Tindulra, which you encounter just outside the castle. It looks like the regular kind found across Skyrim, but it’s the size of a bear and shoots bursts of fiery AoE damage from its gnashing mouth. It also likes to pounce on unsuspecting raiders for a greedy nibble, which you’ll need to react to, and quickly. 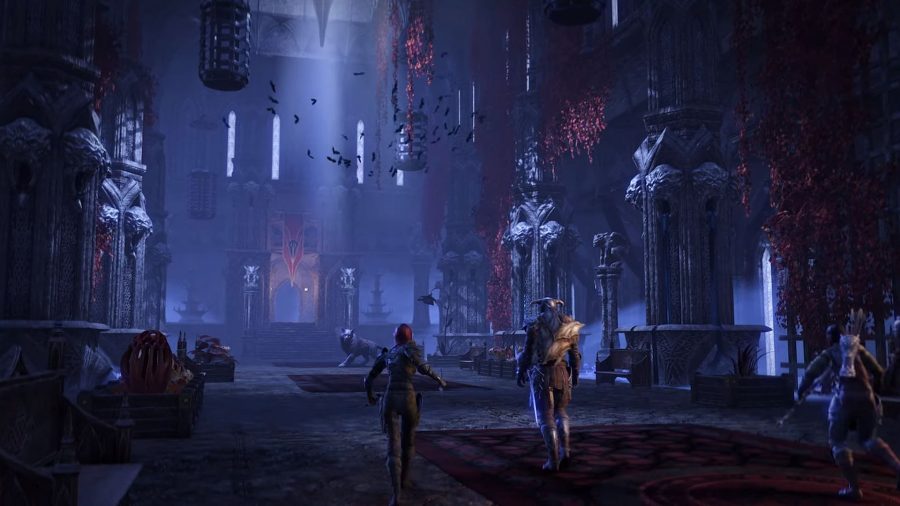 Beyond Castle Thorn’s cheerless but opulent entrance hall, in a square foyer with a flooded pool in its centre, lies another challenging boss. I’m told that pool is not good news. The Blood Twilight, previously meditating at its centre, is a devil-like vampire that charges right at our faces and starts swinging like Tyson playing jazz. He’s helped by a cohort of imps pumping him full of glowing red energy, which only the bravest of us can run around and take out – because doing so risks getting pancaked by his nastiest trick.

The Blood Twilight intermittently hops back to the pool’s central plinth, turning its water into a glowing tank of blood which will juice your health bar quickly if you fall in – so, you can probably guess what’s coming next. The boss summons translucent clones of itself who will try to push you inm like your dickhead cousin at a pool party except they aren’t too cute to punch. Also, your cousin doesn’t scatter red blood bombs about the poolside that can explode and – you guessed it – knock you in. I hope.

The result is a tough but hilarious fight in which the Stonethorn team and I shed all semblance of finesse and just tear around, battering beasties as we can, and trying – often hopelessly – to dodge being catapulted into the demonic pool, laughing all the while. It’s a totally new flavour of dungeon boss mechanics in ESO, and it really works. For a team of four it’s hard but hugely entertaining. 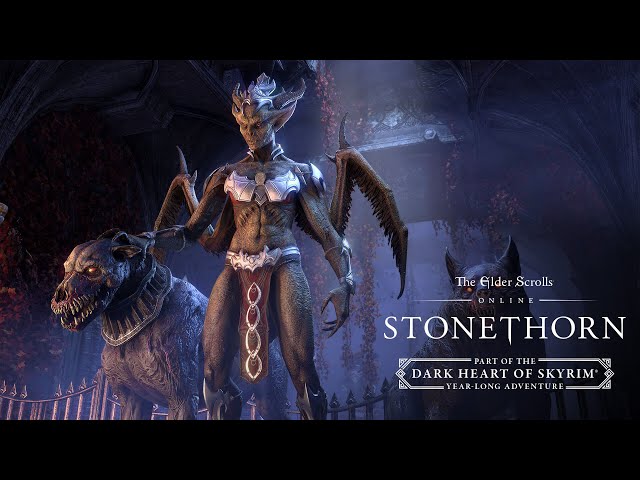 Next, I spot some scythes lying about a snowy courtyard, which alert me to some brand-new boss mechanics I’ll have to tackle very soon. These, along with some particularly creepy ‘reanimated vampires’ you fight nearby, hint at the next, equally challenging boss: Vaduroth. This guy’s found in a lair that crosses into the world of survival-horror games: a tower chamber choked with vampire corpses hanging from meat hooks in the ceiling. Yikes.

Vaduroth’s not popular, even amongst vampires – and it’s not difficult to see why. The creator of Lady Thorn’s vampire zombies, he’s an enormous, bony, bird-like creature with a black robe and scythe who’s irritatingly tough to take down. The secret lies (literally) in his hands: he’ll occasionally drop his scythe, which is your cue to scoop it up and cut some of those meat hooks down, giving you a bit of help courtesy of its former, er, occupant. Do this enough, and it becomes a matter of dodging Vaduroth’s AoE damage bursts and whittling his chunky health bar down to zero.

Boss four, on the other hand, is a tank of a vampire – a Blood Knight, who stands at more than a storey tall and can animate stone gargoyles to send against you. This is a far less complex battle – it’s a matter of delving deep into your skills to survive his meaty swipes and stomps, dodging those gargoyles (tackling them head-on is not recommended), and keeping yourself alive. 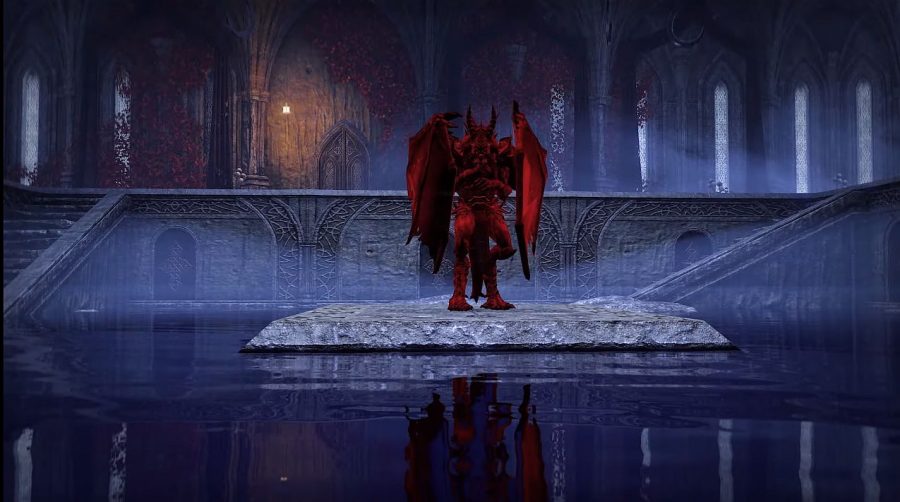 Which brings us, at last, to the final boss: Lady Thorn herself. Found in the supremely gothic Cathedral Narthex, deep in the castle’s labyrinthine network of chambers and corridors, the ancient creature floats down in her ‘true’ vampire form, her human-like guise discarded for the winged, devilish shape you’ll remember from Dawnguard. She’s got a lot of tricks up her sleeve, some entirely new to ESO, which you’ll have to get to grips with on the go. She’s a furious opponent, launching rapidly expanding AoE ‘cakes’ of damage, swarms of angry bats, and ‘blood crawlers’ around the gloomy chamber. She can teleport at random, and she’s really beefy if you’re lucky enough to get close and take a swing.

Lady Thorn will lunge out of nowhere at members of the group, claws swiping, to latch on and drain your health.

Her biggest trick, however, draws on her vampiric nature. When a glowing green-gold vortex circle pops up during the battle, you’ve got to stay in that circle, even as it rotates around the room, because Lady Thorn will lunge out of nowhere at members of the group, claws swiping, to latch on and drain your health. You can’t damage her when she’s in this mood, and your only hope is to grab ‘blood balls’ dropped by the blood scavengers she’s spawned and toss them in her direction. Hit her with a few and she’ll calm down. Well, a bit.

These periods give us a chance to charge Lady Thorn, wearing her health down bit by bit until she’s down. It’s a fight, but a satisfying one, if only because evading her tricks is an all-engulfing challenge in itself. Your reward for finishing the dungeon? Various goodies, such as a red-hued glowing skin effect, normally sported by those resurrected vampires, but also another piece of the puzzle in the Dark Heart of Skyrim’s story, which will become clearer in the prologue that it – along with besting Stone Garden – opens up. Phew. One down, one to go, then.

The Stonethorn DLC pack launches today on PC, Mac, and Stadia, and on September 1 for our console friends.