Skyrim has plenty of kit knocking about that can give your Dragonborn some (often, much needed) buffs and effect boosts. Helmets, amulets, circlets, armour, and weapons often come infused with some handy effects-based helpers for your hero, and it’s mighty tempting to bedeck your Dovahkiin in everything you find to maximise their chances against Tamriel’s beasts and baddies – but the finished look of all this gear piled on isn’t necessarily what you’re going for. Thankfully, a new mod helps solve this dilemma.

Powerofthree’s ‘Equipment Toggle’ mod is a plug-in for Skyrim: Special Edition that lets you do just that – it “visually toggles” your equipment on and off without actually unequipping it. So, it looks like you’ll get to keep all those perks and buffs you’ve accrued through looting Skyrim’s many forts, caves, and – well, let’s be honest – residences by keeping them technically equipped, but without hiding all that hard work you put into your appearance.

The mod works using hotkeys, which are tied to certain toggleable equipment slots. It includes options to automatically hide items you’ve got equipped, unhide your gear when you enter combat, and then hide it when you enter an inn or home.

While the mod doesn’t allow for toggling body, glove, or boot slots (you’d probably want to keep them equipped anyway!), “almost all items can be toggled”, as the modder explains. So, looks like good news if you’re keen to keep the health and mana buffs, snazzy magicka attack effects, and added carry weight from all that gear you’ve been kitting your hero out in but with a more minimalist approach to accessorising. 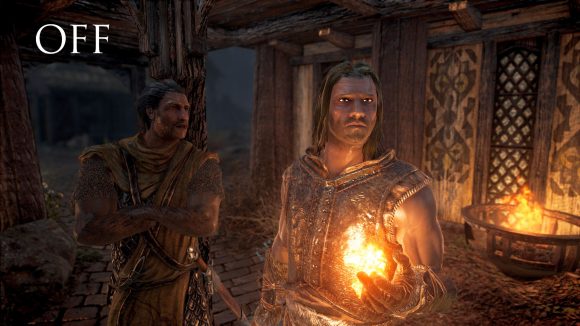 The mod works on followers and all NPCs as well as your own character, too.

If you’re keen to get an idea of how the mod works or fancy grabbing it for yourself, you can find it on Nexus Mods here. As ever, mod with caution – and be sure to take a look at our rundown of the best Skyrim mods while you’re here, too.