Vanilla Skyrim’s UI is, famously, pretty crap. In fact, it’s so crap that one of the game’s most downloaded mods is SkyUI, which neatly streamlines everything for PC players. It hadn’t occurred to me that its monochrome minimalism might be kinda ugly too, but I’m reconsidering that in comparison with the classic parchment look of predecessor Oblivion. Fortunately, there’s now a mod that lets us import that look to SkyUI.

In fact, SkyUI themes is a new series of mods by the noted Skyrim modder ElSopa, suggesting that further editions are planned (could a Morrowind reskin be in the offing?) The first theme is called The Adventurer, and it’s quite clearly based on Oblivion’s UI.

Uploaded yesterday, the mod is still a work-in-progress, with ElSopa currently seeking feedback for the final version. Some compatibility with famous mods is missing – such as warmth indicators for Frostfall – and some UI elements aren’t clickable yet, so you’ll have to use your keybindings. We also reckon highlights could be in a colour other than white, as they struggle to stand out against the lighter background.

But if you don’t mind all that, you can download it now – here’s the page on Nexus Mods. It is already, undeniably, very pretty: 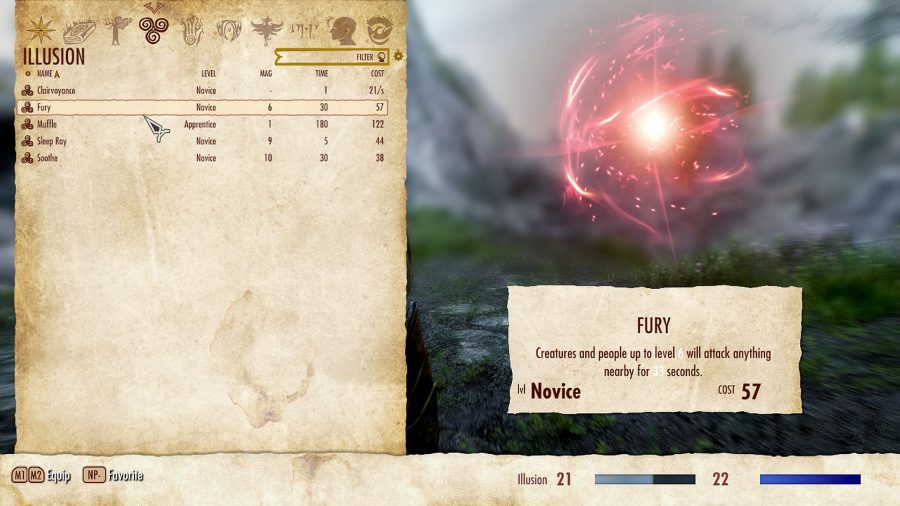 ElSopa is a prolific Skyrim modder, with 120 files listed on their page on Nexus. UI refinements are a particular specialty, so check their work out if you’d like to further improve the vanilla game’s interface.

In recent Skyrim mod news, the devs of the keenly anticipated multiplayer mod Skyrim Together have had a bit of a tiff with their community. Despite receiving around $18,000 a month from fans on Patreon, the devs huffily rebuffed concerns over the release date with the claim that they don’t “owe the community anything.” That went down poorly.