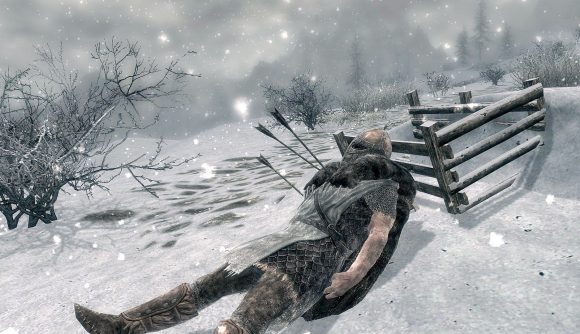 Snow is essential to Skyrim, as water (and thieves) are to Sea of Thieves, or fevers to Saturday night. Thus, for a better Skyrim, one must have better snow, and we’ve found two mods that improve the realism of frozen crystalline water in Tamriel’s northern region both in appearance and behaviour.

First up is RIS – Real Ice and Snow by grVulture, now updated for Skyrim Special Edition. This mod retouches environmental snow and ice for greater realism. Snow textures seem more voluminous, as if real flakes might have fallen and clumped together – vanilla snow just looks flat by contrast. The effect is especially pronounced where snow interacts with other objects, such as plants and stone roads. Ice has also been retouched in its many forms – icicles, icebergs, ice floes, and glaciers.

And then there’s trebtreb’s Get Snowy, a Special Edition conversion of Hoax2’s popular mod, which adds appropriate visual effects to the player and to NPCs when snow is falling. It affects the player and all NPCs both living and dead, including wildlife. The effect is reminscent of what happens when suffering frost damage, but its latest version adds some distinctive large white flakes to the mix.

You can check out a video preview of RIS below:

Read more: Skyrim is one of the best RPGs on PC

Personally, I’ve never appreciated Skyrim more than when hiking up a mountain in the middle of the night, the wind coaxing snow off its peak in a fine mist as the Northern Lights glimmer. Any mods which add further to that mesmeric atmosphere would be a priority for me.