You might be familiar with the tales of Eslaf Erol from the biographer Reven’s accounts of his adventures across Skyrim. It’s important to recognise his often gross exaggerations and shameless distortions: ‘Beggar, Thief, Warrior, King,’ Reven wrote. That’s a little reductive of the truth.

Despite being born into royalty, unbeknownst to himself, Eslaf Erol became a pauper before he could walk. Every day he saw the kingdom of Erolgard’s richest citizens while nobody saw him: warriors clad in Ebony armour strolled through the streets, and wielders of awesome magic performed dazzling illusions for more septims he’d see in a year. From a side street in Solitude, I watched them with Noster Eagle-Eye, a fellow beggar and fierce friend. ‘If only I could do those wonderful things,’ I thought to myself, as I spent my coin down the Skeever. ‘Maybe one day.’

Lacking much alternative, I turned to pickpocketing, and found I had a certain adroitness in the art. The rich folk in Solitude barely even noticed when a ring went missing, or even a Gold Emerald Necklace. But as a beggar, it was obvious that this extravagant jewellery was not mine; I never even had a family heirloom to pawn, and most shopkeepers kicked me out on sight. I knew a fence, however, and they were more than happy to take all manner of trinkets off my hands – although they rarely paid well.

I had heard chatter about the return of the Thieves’ Guild, and given my newfound proficiency in the arts of stealth and subterfuge, I decided to spend the spoils of my larceny on a carriage to Riften. On my arrival, I met a man in the town square.

Brynjolf, I think. He had me frame Brand-Shei for the theft of Madesi’s ring, and before I knew it, I was invited to an audience in the infamous and exclusive Ragged Flagon. It wasn’t long before I was pulling off heists with Vex and Delvin Mallory on a daily basis, and making a ridiculous amount of coin along the way. 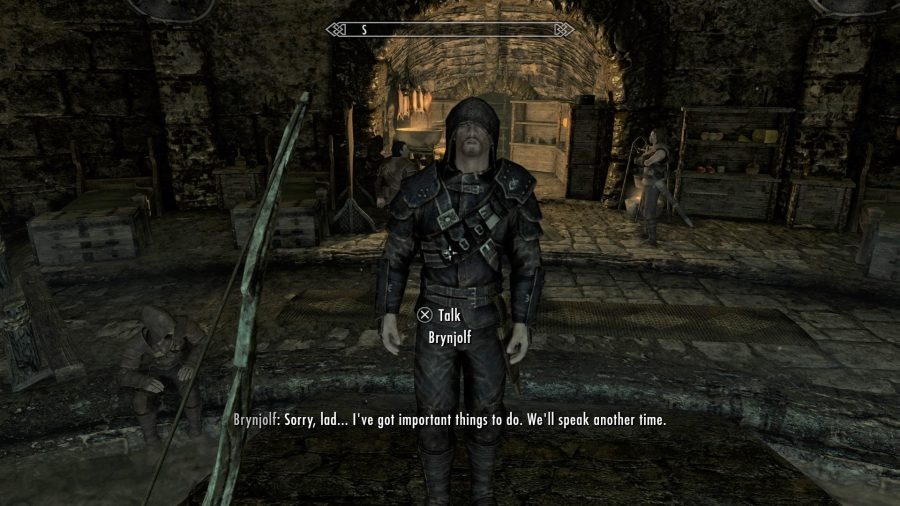 My ambitions within the Guild soured, however, after I discovered and exposed a traitor in its ranks. The thrill of thievery had worn thin, and because I’d had to clean up more than a couple of messy situations with the Guild, I had become an adept archer and a virtuoso with knives. I decided it was time to turn my talents to a more lucrative line of work. As it turned out, luck was on my side – having drifted north to Windhelm, I overheard a young boy trying to invoke the Black Sacrament. I took it upon myself to fulfil the contract – the boy reminded me of myself in my youth: alone, scared, desperate. I would kill the person he wanted dead.

Conflicted about the dark deed I had done, I philosophised with the aid of Candlehearth Hall’s finest ale, staring into the abyss at the bottom of many a bottle. Inebriated, I passed out, and when I woke up, I was in an abandoned shack in the middle of nowhere. There, I met the person who would turn me into a killing machine: Astrid.

I joined the Dark Brotherhood and took the lives of delinquents and debauchers for prices worthy of the warriors that used to step over me in the streets. I began to doubt the valiance I once assigned them – perhaps they, too, were nothing more than blades for hire, ruthlessly expunging the life of unsuspecting citizens for a new necklace, an expensive shield, or a fancy set of Ebony armour. 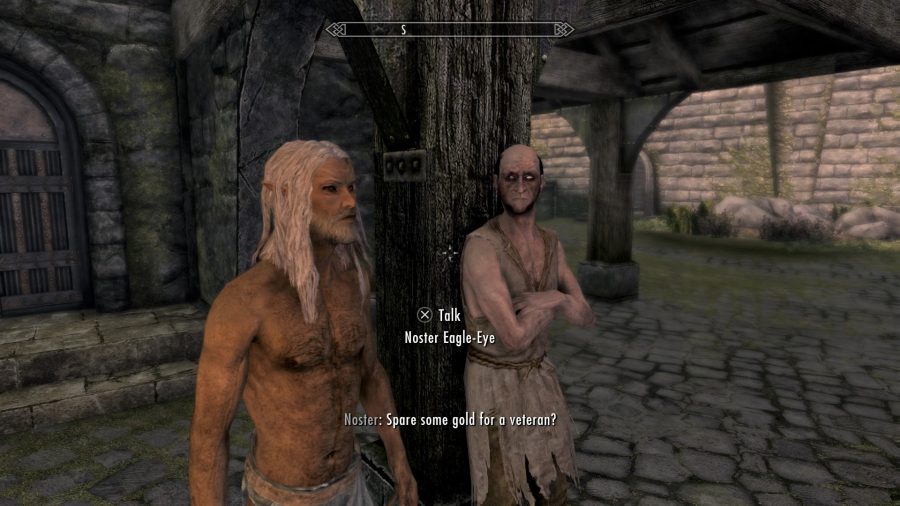 Although my run with the Dark Brotherhood was successful in many ways, I was forced to leave after I lost Astrid to the traitor Cicero. I made a point to avenge her first, and in the abandoned Dawnstar Sanctuary I confronted the jester. I gave him the justice he deserved, but I could not return to the Brotherhood; even without the taint of Cicero, I’d grown disillusioned with the assassins’ lack of honour. I needed a change, and I reasoned that whether or not the warriors I’d idolised in my youth were as heroic as I’d imagined, I could find out, and be the change I wanted to see in the world myself if they fell short. So I sought the fabled halls of Jorrvaskr and joined the Companions.

Interested in other ambitious endeavours that can spice up reprising your role as the illustrious Dovahkiin? As well as becoming the eponymous, legendary Eslaf Erol, you can play through all of Skyrim while strictly adhering to a plant-based diet. The World-Eater fears vegans!

I went on many adventures with Aela, Vilkas, and Farkas. Together we defended the weak and protected the innocent, and even scoured the Tomb of Ysgramor to free the soul of our fallen comrade, Kodlak Whitemane. In Jorrvaskr I felt like a true Nord, a noble warrior-poet who used his talents for good, and could decline contracts on grounds of morality. But alas, my insatiable appetite for adventure only grew among the Companions. I was content for the first time, but I wasn’t truly fulfilled.

Stirred by wanderlust and having been entrusted with the Companions’ greatest secret, one night beneath the moonlight, I transformed into a werewolf and rampaged the whole way to Winterhold. When I arrived, it was morning, and I had retaken my human form. Having learned some basic combat magic with the Companions, I walked up the steps to the illustrious College of Winterhold, and demonstrated my arcane skills. 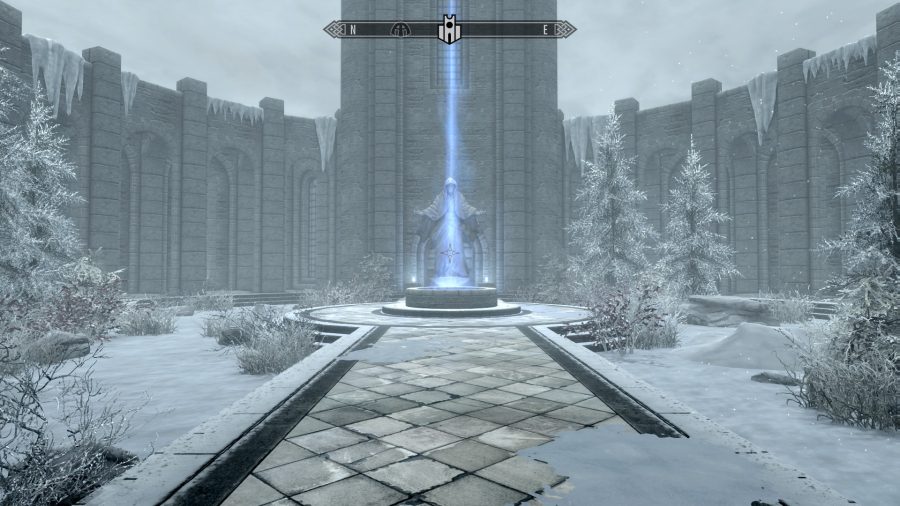 I was taken to meet the Archmage Savos Aren, to this day the most intelligent man I’ve ever encountered. I enrolled as a student and learned as much as I could from Tolfdir, even rescuing him from a particularly precarious situation in the decadent ruins of Labyrinthian. Alas, before I could ascend to the role of Archmage, my wandering eye betrayed me once more; In my studies, I had become /obsessed/ with the Daedric artifacts scattered across the continent, and lost many restful nights to wondering about the awesome power they promised.

I decided to part ways with another surrogate family, and undertook a self-imposed quest across Skyrim to unearth these mysterious objects: The Mace of Molag Bal, Mehrunes’ Razor, the Oghma Infinium. Over the course of about a year, I managed to collect them all. However, instead of using them for selfish gain, I hid them in the darkest recesses of the earth, to protect other equally curious, but less scrupulous, adventurers from themselves. It was then I realised that I had done everything there is to do in Skyrim. So I went to Solitude and stated my claim to the throne. They laughed at me, recognising me for the beggar I had been. Embarrassed, I left the Blue Palace without a word.

Role to safety: The best RPG games on PC

Then I installed the High King of Skyrim mod and became the King anyway. Because that’s supposed to be the end of my story: Beggar, Thief, Warrior, King.