Recently, I finally realised a decade-long dream to play Skyrim in couch co-op alongside my favourite real-life companion. I’ve seen some unbelievable things along the way – heroes riding invisible steeds into battle against mammoths, a harmless rabbit on my screen that appears to my partner as a savage wolf, and civilians slowly ascending to the heavens over the plains of Whiterun before their divine tethers break and they plummet to the ground below.

If you’ve played any iteration of Skyrim over the years, you’ve probably seen things similar to those listed above, but let me tell you that playing Skyrim in split-screen (through a combination of the Skyrim Together mod and the ingenious Nucleus Co-op tool) will hurl you all the way back to the dark ages of the game’s stability.

And yet, despite technical hurdles appearing as frequently and suddenly as bugged Skyrim NPCs, I felt compelled to continue playing Skyrim Together, spurred by those precious periods of technical peace when I was swept up by how well Skyrim works as a co-op game.

It turns out that creeping through dungeons by torchlight, clearing bandit camps, and running along the shady side of a mountain on a shelf one pixel wide to emerge upon a brilliant sunrise are all experiences best enjoyed together. Even without the deluge of despawns and respawns, quest syncing glitches, and physics anomalies so twisted they’d get Gordon Freeman hot under the collar, split-screen Skyrim creates moments that rank among the best I’ve experienced in co-op games (and anyone round these parts will tell you that I’m a sucker for co-op RPGs). 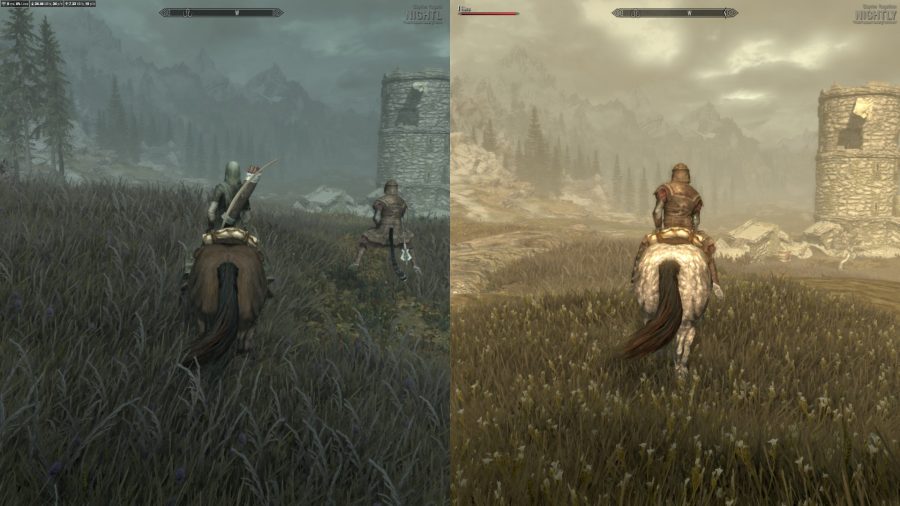 But getting to those moments requires patience. Lots of patience. So let the following account of my adventures and misadventures give you an idea of whether you’ll find split-screen Skyrim worth the anguish (and note that in the interest of brevity we’ve skipped a good few hours of tweaking settings, disabling mods, and restarts).

After creating our fresh-faced new characters with the Alternate Start mod, which conveniently lets you choose your background and starting location, my partner and I bash in the local IP address to connect to the same Skyrim instance. The sudden shift in weather as our worlds collide captures the gravity of the moment, and there’s a frisson of joy as her health bar appears in the top corner of my screen. We’re in Skyrim, together, and that already feels seismic, no matter the pain that inevitably awaits. But first we have to find each other.

There’s no indicator on your screen about where your partner is, but through a combination of peeking at one another’s screen and cross-referencing landmarks, we manage to arrange a rendezvous in the city of Riften. 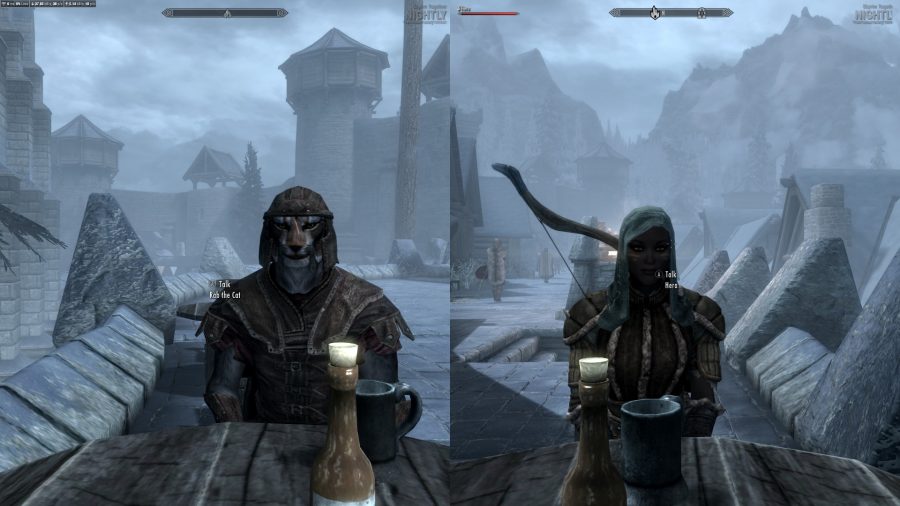 As I look for my partner in the squalour of Riften market, I spy on her half of the screen that we don’t quite see the world the same way. Where in my world the rugged folk of Riften go about their business like clockwork, in her eyes many of them stand around lasciviously in the nude, eerily leaning on invisible counters and sitting on invisible chairs as if inhabiting a very thirsty dimension a mere half-digit away from my own.

But then, nary a minute later, my tenuous veneer of normality is shattered when I finally spot my partner through the crowd, gliding towards me with her feet just above the ground and her arms outstretched, parting the Riften rabble like a skooma addict with a Moses complex. What should be the majestic moment of our first co-op meetup in Skyrim also serves as a harbinger of the weirdness to come. 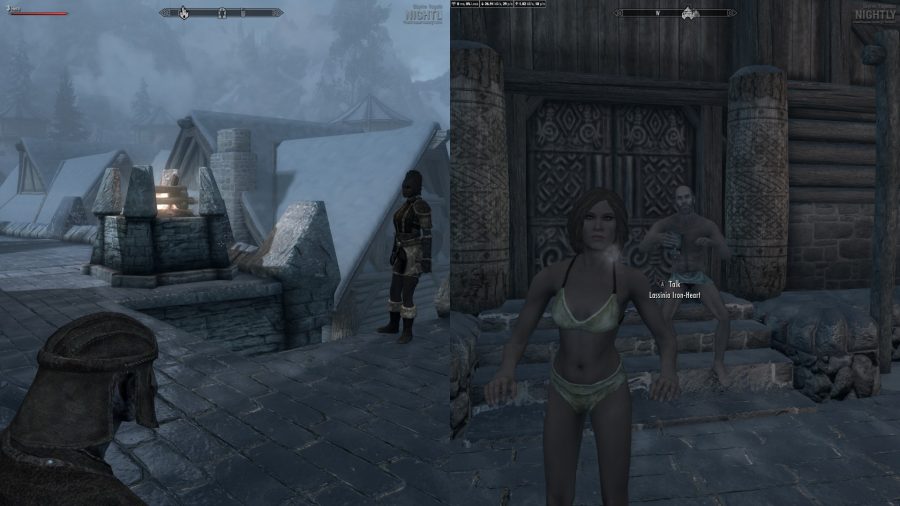 My partner soon stops her gliding act, and we prepare for our travels while learning the rules of this new shared world. Chests, corpses, and other containers have their own sets of items that you can both loot. You can’t drop items for your partner on the ground, but you can deposit things in chests and cooking pots for them to pick up. Oh, and if your partner is sneaking around, don’t look at them. That will cause them to become ‘detected’ and you to become an unwitting snitch.

Skyrim Together isn’t the best representation of Nucleus Co-op, an open-source tool that has scripts turning over 300 online-only games into split-screen co-op games. Many of the scripts work seamlessly, like Halo, Grim Dawn, State of Decay 2, Don’t Starve, and many more.

Once we get our travel supplies together, we decide to jump in at the deep end of stability by making for Bruma, the vast modder-made expansion that lets you leave Skyrim for the northernmost reaches of Cyrodiil. We leave Riften seamlessly thanks to the Open Cities mod, which removes loading screens between wilderness and cities (I found loading screens to be the prime cause of desyncs, so the fewer, the better). We head westward through autumnal woodlands with only the occasional surreal incident. At one point, I witness a rabbit get ravaged by a wolf, while my partner instead sees a wolf getting chomped by another wolf. An invisible bear nearly gets the best of us, but we manage to scamper out of harm’s way by hitting terrain that’s always been insurmountable for Elder Scrolls AI: water. 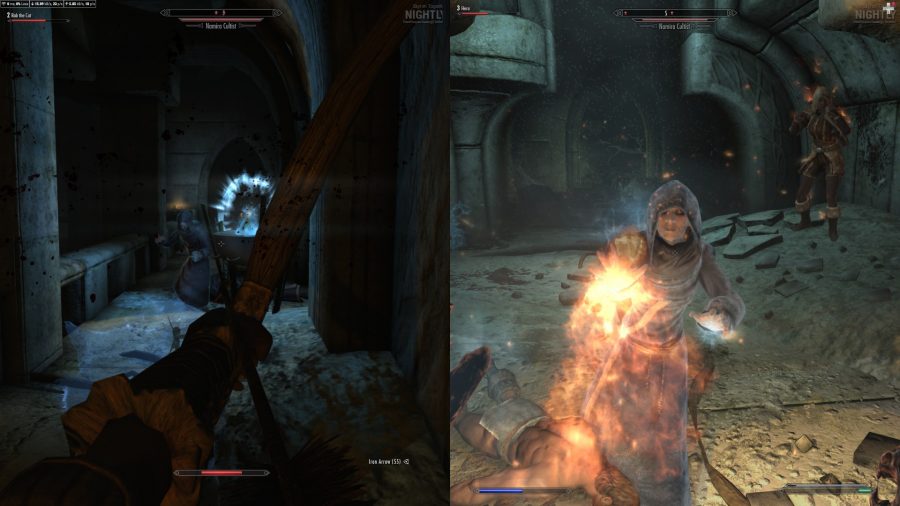 Luckily, we don’t encounter many more invisible predators, though an interesting side effect of the mod is enemy duplication. For the most part, this is a nice way to scale up the challenge to match the extra firepower of two players (we cranked the difficulty to ‘master’ too), but it also turns dungeons into an accidental wave survival mode.

I spot my partner gliding towards me, feet off the ground and arms outstretched

Take one of our dungeon crawls as an example. It starts out as one of those lovely, tranquil moments teasing the full potential of co-op Skyrim. The lights radiate from our torches, casting scuttling shadows over the walls that we keep mistaking for enemies, and there’s a wonderful shared sense of foreboding as we go deeper; the same heightened intensity you get when watching a horror movie with a friend rather than alone, as your respective twitches, jumps, and anxious energies amplifying the experience. Soon enough, we run into our first doubled-up encounter – a gathering of around eight necromancers.

It starts swimmingly, with my partner sneak attacking a couple of the berobed bastards while I charge in swinging my mace. It’s another moment when Skyrim Together shines, with the game’s dual-wieldy hack-and-slash combat mechanics being well suited to higher enemy numbers and that extra sprinkling of chaos. Just run into a crowd swinging and you’re bound to hit something. 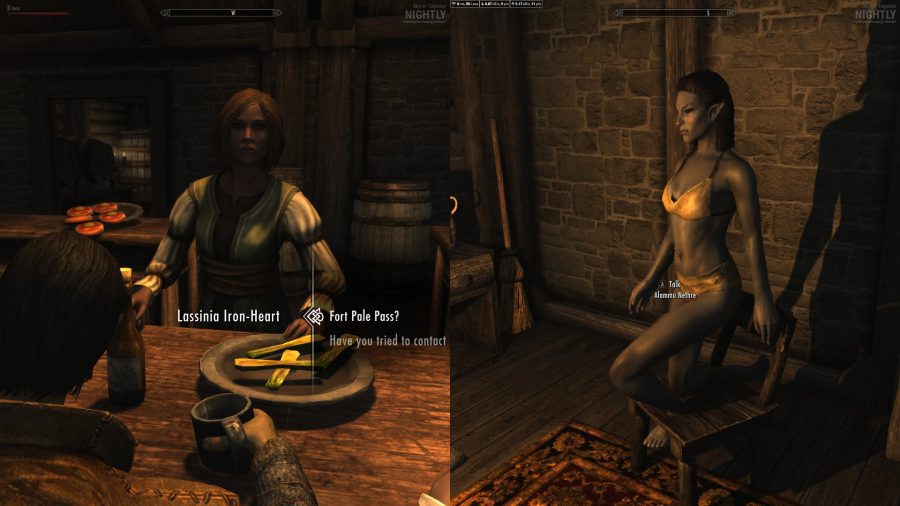 But then disaster strikes. The enemies break our line and my partner – so dedicated an archer that she refuses to carry melee weapons – gets killed. The game loads up her last quicksave, which is in the dungeon just before our fight. This causes every enemy we killed to respawn (with some mercifully, if inexplicably, collapsing dead upon their rebirth). We continue fighting valiantly, but then when I die and our foes get resurrected again, we both fall. Weirdly, this self-perpetuating madness kind of works, imbuing each death with an almost Souls-like sense of consequence whereby the more reckless you are, the more punishing the world becomes.

The example above is relatively elegant. Watching each other ride around on invisible horses, inexplicably nude NPCs, enemies suddenly changing character models, and seeing my fallen foes ragdoll 100 feet through the air on my partner’s screen may not do much for immersion, but they’re all extensions of the kind of nonsense for which we love the Elder Scrolls series anyway. Yes, the game outright crashed a couple of times, and you may as well have that local IP address saved to your clipboard for the number of times you’ll need to reconnect to the server, but there’s still enough magic here that the hassle to set it up is worth it for diehard co-op adventurers. 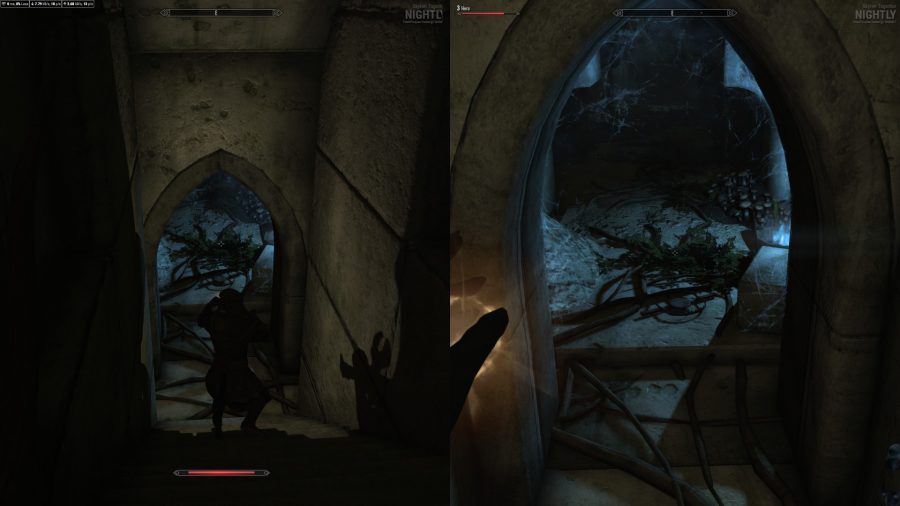 Incredibly, we managed to bumble our way into Cyrodiil for the Beyond Skyrim: Bruma content without the mod having a meltdown. As we descended towards Bruma, we caught a stunning view of the iconic spire and rings of the Imperial City in the distance, which felt somehow fitting. Like Skyrim Together, this view of the Imperial City beckons you, flirting with the seemingly limitless potential and resourcefulness of this game’s tireless modding community, before reeling your imagination back in towards reality.

Turn on no-clip mode and fly over to the Imperial City, and you’ll see that it’s just an empty low-poly armature with nothing contained therein – but that’s not really the point.

The same applies to Skyrim Together. It may not be quite how I imagined playing Skyrim in split-screen, but reel in those expectations and accept the rough edges, and you’ll come away from it with some pretty wonderful stories. It’s a manifestation both of modding’s potential and its limitations; a quixotic project that may or may not fully manifest, but has shown enough to give me hope, just like those grand perma-projects Skywind, Skyblivion, and Beyond Skyrim. I’ve tasted the potential of couch co-op Skyrim and I desperately want to see more.