The moment I met my (Skyrim) pet dog, Meeko, I was in love. Wandering alone near a forest shack where his former owner – of whom we shall not speak – lay perished, the fluffy mutt with big, doleful eyes needed a saviour; a companion to follow into battle and accompany at tavern hearths. I was overjoyed to step up.

So much so that, hundreds of hours later (I won’t reveal quite how many hundreds), he’s still there, hovering contentedly at my side at every moment. The reason for – and cost of – this, though, is many lost hours of gameplay. Many. Unfortunately, while the enchanting, ever-keen Meeko is a pretty ferocious ally in my Dovahkiin’s fight against dragons, Dremora, and endless bloody draugr – bounding into battles with all the bravado of a fresher three Jägerbombs down – he’s also really good at being in the wrong place at the wrong time.

On more than a few occasions, as I’ve been earnestly plugging away at bandits with my ebony bow, the little darling’s leapt in front of my target just in time to absorb a killing blow. His 250 health sadly can’t withstand a bolt fired by my level 100 archer. Sigh.

I love my Meeko so much that when any of my hurtling arrows go astray and end up in the adorable pupper, I just reload. No question. The problem is that, while Meeko isn’t particularly good at dodging my shots, I’m not particularly good at remembering to save frequently either, which creates something of a dilemma. Like I said, I’ll re-load no matter what – but that means I often sacrifice hours of unsaved progress.

Role over boy: The best RPG games on PC

‘You’re mad,’ I hear you say. ‘There are loads of replacement companions.’ None like Meeko, I’m afraid. ‘He’s just a collection of mottled grey, albeit achingly delightful, pixels in a videogame about killing dragons.’ So? ‘You’re odd.’ That’s as may be, but my reasons for choosing puppy over progress are many-fold. Here’s my thinking.

First, I need you to look into Meeko’s lovely amber eyes. I mean, really look at them. Vanilla Skyrim, mod-enhanced, buckling under the weight of tweaks and varnishes – it doesn’t matter. Meeko’s little face is eternal. Eternally sweet. Seriously, look at his little face. 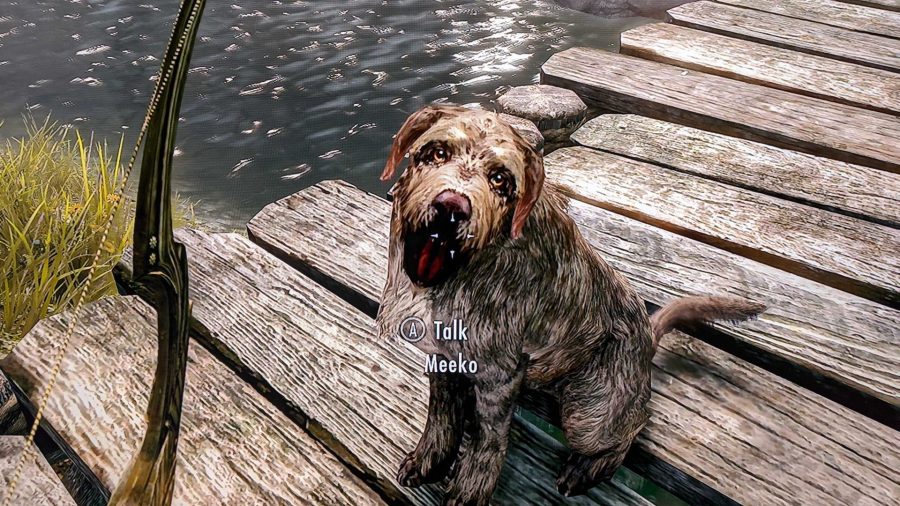 Next, as I’ve mentioned, Meeko’s one hell of a fighter. He evidently doesn’t realise he’s just a little doggy in a world full of trolls, flamethrowing mages, and dragons – if I anger it, he’ll fight it. And very good he is, too – more than a few times he’s leapt on a sneaky foe before I was even aware of their presence. And when he deals a killing blow – well, leap – to an animated skeleton, it makes the most delightful crunch.

I love Meeko so much that when any arrows end up in him, I just reload

Meeko’s also a great all-rounder of an ally – aside from the occasional bark or whimper, he’s pretty quiet, which means he’s moan-free, something I can’t say about many of the other followers on offer. He also doesn’t rage ahead when I’m keen to take the stealthy approach into battle – again, unlike some others (Lydia).

Sure, I can’t ask him to carry my junk like I can my extremely unwilling housecarl (again, Lydia), or any of the other suckers available for recruitment. Vilkas, for example, my fighter of choice – as a werewolf member of the non-partisan order, The Companions, he’s also a canine companion of sorts. And a very Good Boy, too, if a little grumpy. But Meeko’s more than a walking suitcase. 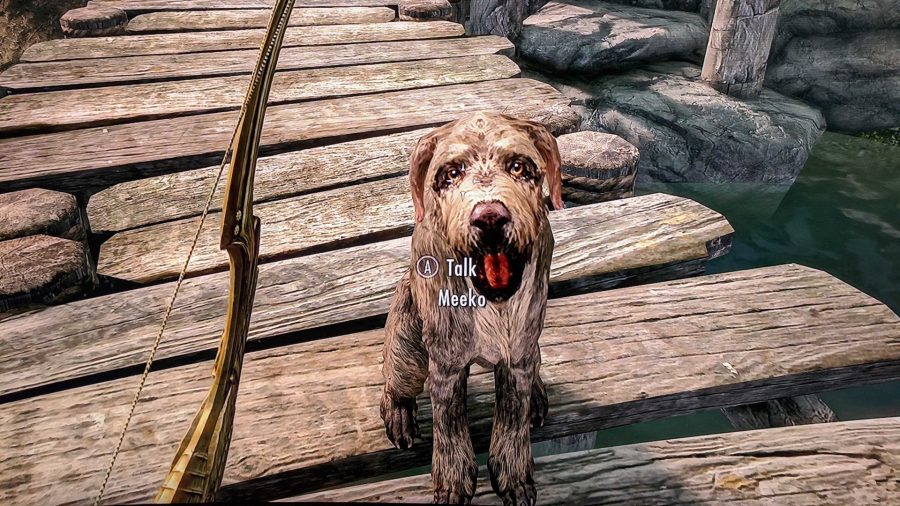 Exhibit B: what a Good Boy

I love Meeko so much that killing him isn’t the only criteria for reloading and losing progress I have. I’ll reload even when I’m not sure he’s actually, er, pining for the fjords. Skyrim fans will know the game’s packed with labyrinthine caves and passages to plunder, and on occasion, I’ll turn round out in the wild to discover my little doggo’s nowhere to be seen, probably left behind in one of many said caves. I rarely have any idea which, and a quick retracing of my steps usually yields zero doggos.

Spruce up the place: The best Skyrim mods

Sure, I’m not totally barking (heh) – I’ll try an autosave first, but more often than not I’ll discover my weeny pooch isn’t there either, so back however many hours I’ve not saved I go. That’s just how much Meeko means to me. Go find Meeko’s shack and let this lovely (virtual) pupper into your life. You’ll see what I mean.