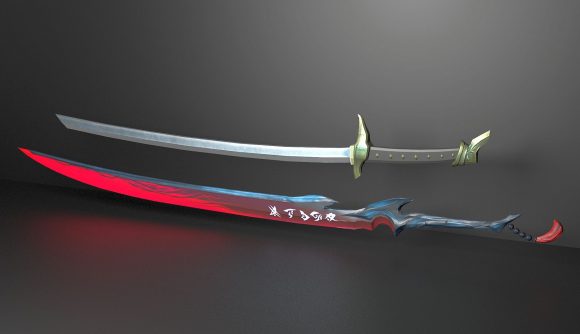 We’ve all been there. You’ve loaded into a League of Legends game in the hopes of snapping up some quick LP – your trusty Yasuo pick ready to rip up the rift – but instead of achieving your 0/10 power-spike your nexus explodes, leaving you face-to-face with the defeat screen. You think to yourself that today isn’t your day, and look to delve into ‘other games’, but nothing else can quite scratch that itch. Well, if you happen to have a copy of Skyrim lying about, then you might be in luck.

Lime1Light’s League of Legends weapon mods have finally made it possible to relive your past glories through the medium of mercilessly mercing Tamriel’s beasties. With each mod, your weapon of choice gets added to the player’s crafting table at the forge. However, these weapons do require the Ebony Smithing perk before they can be crafted. Yasuo’s katana for instance requires two ebony ingots, four leather strips, and, aptly, one pile of salt.

The mods also possess some real potential when combined with some of the others we have covered recently. For example, matching Tryndamere’s sword with dummy thicc Minecraft Steve ensures that, between the clapping of your cheeks and the giant six-foot sword dragging behind you, not even 100 Sneak can prevent you from being spotted. And what better serotonin boost is there than giving an NPC a good ol’ hug? Except the NPC is the Tamriel equivalent of Julius Caesar, and you’re dual-wielding Pyke’s dagger and Rengar’s knife.

With regards to getting the most out of these mods aesthetically, then our 100 best Skyrim mods list should provide suitable inspiration. Installing Enhanced Blood for example will ensure maximum immersion when getting the jump on squishier foes with Rengar’s knife equipped. As these LoL weapon mods also feature high-quality textures, then now is the time to invest into 2K textures across Skyrim if your GPU budget allows it.

So far, Lime1Light has provided weapons for the following champions:

If you would like to make your LoL roleplaying dreams come true, then you can access all of the weapon mods Lime1Light has produced so far on Nexus Mods right here. The mods are available on both standard and special editions of the game, so either way you should be good to go. As far as potential performance hits are concerned you should be fine, as Lime1Light themself has said in a Reddit post that the polycounts are low enough that they don’t even affect their old, low-end PC.