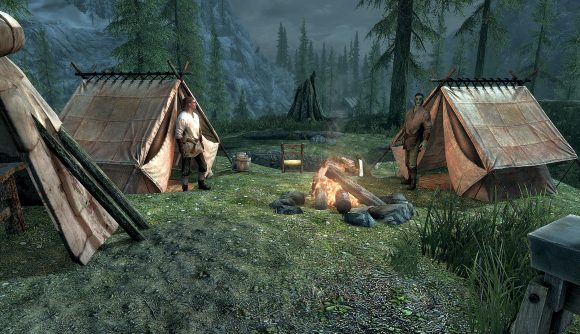 Remember all those abandoned sites in The Witcher 3 that you could de-monster so their populaces could flood back in and take over once again? It’s a neat way of making your mark on the RPG game’s open world – and now you can do it in Skyrim, too, thanks to a new mod that repopulates a mine once you’ve wiped out its bandits.

Modder DKdoubledub asks a very good question: “Ever wondered why someone doesn’t use Embershard Mine after you clean out the bandits? There’s plenty of ore there for the taking, a full forge, leftover tools.” That’s where the creator’s New Embershard Miners mod comes in – it adds Stalgar and Goronk, a “pair of childhood friends (though a Nord and an Orc)” who will “set up camp right outside the back entrance to the mine next time the cell loads after clearing it”.

Like the abandoned sites in The Witcher 3, this means the location will respond to your actions, adding an (albeit little) community that will continue to go about its business once you’ve made mincemeat of its hostile former occupants. Lovely.

Stalgar and Gorunk have a full routine, the modder says, eating at their camp in the mornings, working in the mine during the day, then drinking and chowing the evenings away at the nearby Sleeping Giant Inn, before stumbling back to camp to snooze, and start the cycle all over again. 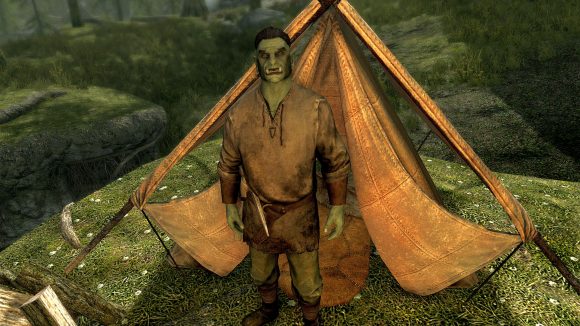 But, you can’t get complacent – Embershard Mine is prime real estate, you know, so it can respawn. Each time it refills with baddies, the miners will stay at camp until you’ve sorted the new inhabitants out. Neat.

DKdoubledub also says on Reddit that they’re planning to extend the idea, and “make a mod that repopulates Skyrim as you clear out dungeons/complete quests/’bring peace to the land, rather than just adding NPCs to towns from the start of the game.” There’s no word on when this might arrive just yet but it’s worth keeping an eye out for. For fans of The Witcher 3’s similar feature, it could end up being one of the best Skyrim mods to add to your game once released.

If you’re keen to pick up the mod for yourself, head to Nexus here. As ever, mod at your own risk!