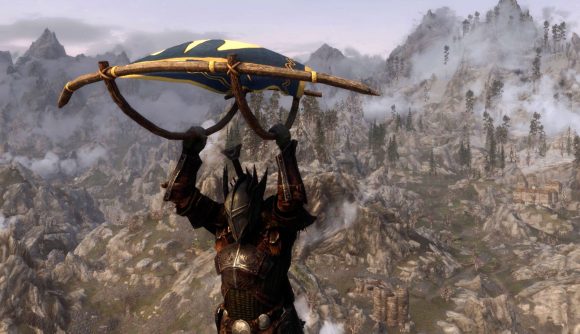 If you can get your hands on four spirit orbs in The Legend of Zelda: Breath of the Wild, you can earn yourself one neat bit of kit: a paraglider. Link can whip this out to sail around Hyrule’s skies, and it’s not only dead handy but a lot of fun, too. Now, after months of development, some Skyrim modders have recreated a working paraglider inspired by BotW’s and brought it to Bethesda’s RPG game.

“Legend of Zelda: Breath of the Wild’s Paraglider comes to Skyrim,” modders LokiWasTaken and NickNak announce, explaining that following “nearly six months in development after various hurdles and issues, it’s finally reached a playable, working state and is ready to be released.” And, as you can see in the clip of the mod in action below, the Tamriel take on a paraglider seems to work like a dream, just like Link’s.

Naturally, you won’t need to complete the same steps as you would in BotW to get your Dragonborn’s mitts on Skyrim’s paraglider. You’ll just need to head to Falkreath and keep an eye out for a bloke named Fred near the crossroads by its east gate, who’ll get you set up.

The paraglider works by hitting the ‘activate’ key while you’re falling, and then you’re off, into Skyrim’s chilly skies. Here it is in action:

The paragliding mod is awesome from skyrim

If you’re keen to grab the mod for yourself, it’s worth bearing in mind the modders’ notes about compatibility – while some mods, like True Directional Movement, are recommended to be used with it, some other movement mods might not be compatible, so do check out the creators’ advice. You can head to Nexus Mods here if you’re keen to have your Dragonborn take to the skies, and check out our list of the best Skyrim mods on PC at that link if you’re looking for more to try.