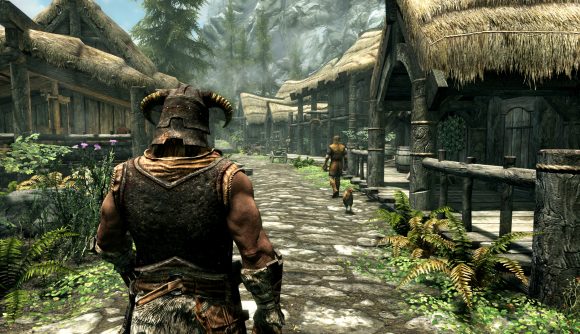 If you’ve ever wished striking killing blows or barging brutish baddies with your shield in Skyrim was more of an up-close-and-personal experience, a Skyrim modder might have the answer: “PRANCE”! That is, Sorlomon’s ‘Proportionally realistic action ‘n’ combat extension’ mod, which tweaks the RPG game’s movement speed and combat reach to make them “more consistent and have some connection to realism”, though not at the expense of making things “tedious”.

The mod overhauls a bunch of aspects in pursuit of this aim, including making “melee weapon contact […] more visually and actually accurate”. The modder refers to a comment they explain is from the Realistic Melee Range mod’s creator DAb, explaining that character collision boxes are set in a certain way in the game – meaning, big – to make it so you don’t have to charge right up to a foe’s face to land a hit in first-person. Games with specifically third-person combat, like The Witcher and Dark Souls, they say, don’t have this same need, and so can make use of smaller, more ‘realistic’ collision boxes.

Sorlomon’s PRANCE mod adjusts combat reach settings in the game to shift them more in this direction, which means Skyrim combat in third-person should feel a little more, er, intimate.

The mod also adjusts a range of the Dragonborn’s movement speeds, which means travelling the land’s snowy highways and byways on-foot will reflect “real-life athletes'” speeds a little more closely. For example, running forwards and sideways becomes proportionally slower, while sprinting, sneaking about, and walking get a bit quicker.

The only catch is these changes also affect some of Skyrim’s beasties, like werewolves and vampires, which now “sprint much faster”, too. Gulp. It’s only fair, right?

If you’re keen to pick up the mod for yourself, you can head to Nexus Mods here. We also have a handy list of the best Skyrim mods out there if you’re on the look-out for some new tweaks and tinkerings to try.