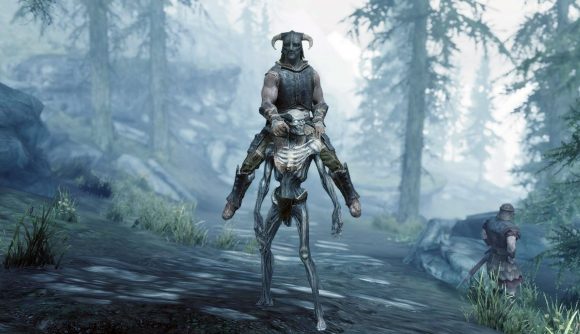 If you’re anything like me, you’ll have quite an axe to grind with the draugr of Skyrim. Stubborn, infesting just about every catacomb, dungeon, and cave in Tamriel’s chilliest region, and always charging at you en masse, the undead Dovahkiin botherers are a massive pain in the – well, they’re annoying. But that’s ok – now you can get your own back on them. Literally.

That’s thanks to Kotobus870’s hilarious new mod that adds ‘rideable and summonable draugr’ to the RPG game’s world. “Ancient Nords used draugr for transportation for many centuries, before horses were invented,” the creator shares. Hmm, you don’t say… The mod adds two variants – a male and female – and you can find them in none other than the Whiterun stables. Where they belong, I say.

Whether you’re a stickler for Skyrim’s ‘traditions’ or not, one look at your equine companion’s new two-legged substitute in action will give you all the reason you need to get one. The mod has your Dragonborn simply sit on the draugr’s shoulders to be ferried around – and it’s very funny.

If you’re keen to utilise your faithful new steed at any time, the mod also adds spells to let you summon them at will. Nice.

If you’re keen to saddle up yourself, you can grab the mod from Nexus here. We also have a list of the best Skyrim mods you can get for PC, for all you keen tinkerers out there. As ever, mod at your own risk!