There’s so much clutter in Skyrim. Tamriel’s frostiest region is chock full of near-worthless knick-knacks, household items, and other, well, junk to sift through in the hope of scoring a shiny new sword or soul gem. But, a new mod puts these random bits of stuff in a whole new light, turning even the most mundane kitchen utensils into deadly weapons.

XvomTheMad’s aptly named ‘Weapons of Clutter’ Skyrim mod transforms a batch of those otherwise useless odds and ends knocking about each and every home in the land into wieldable melee tools, each with “blood effects”. Yikes. Kitchen items modded so far include knives, forks, brooms, and those pewter flagons you’ll see adorning the RPG game’s many cottages, which you’ve probably barged into on the hunt for gold and other goodies. Some farming and crafting instruments have also been overhauled, with the Dragonborn able to carry pitchforks, shovels, hammers, hoes, sledgehammers, and hooks into battle, too – though they’d probably do a fair amount of damage if you could wield them, anyway.

If you’d rather something a little more creative, the mod also makes beating back dragons and draugr with a flute or fishing pole possible.

As you can see in the image below, when not in use, the deadly utensils and household items can be strapped to the Dragonborn’s back as easily as any bow or greatsword. 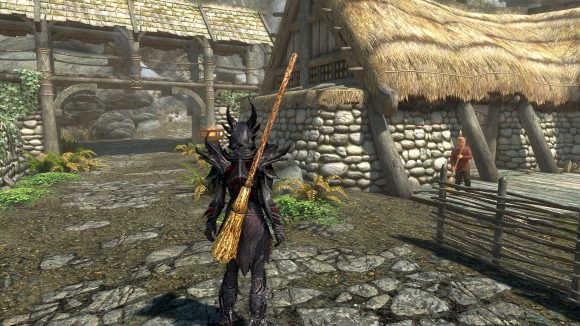 If you’re keen on the idea of charging into battle with a flute, fork, or flagon at your side, you can find XvomTheMad’s mod at Nexus Mods here. As ever, mod at your own risk! And check our our rundown of the best Skyrim mods if you’re on the look out for more things to try.