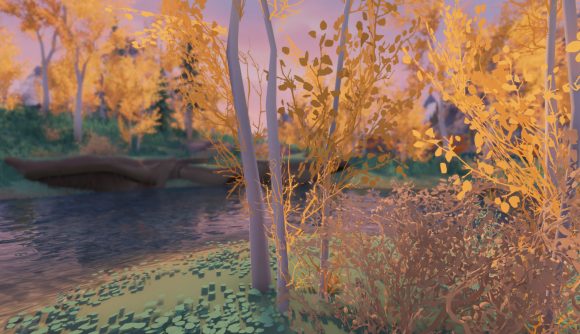 Breath of the Wildrim is a retexture project that makes Skyrim look like Zelda: Breath of the Wild. Yes, you read that right – you might soon be able to give Bethesda’s gloriously gritty RPG game’s visuals the Nintendo title’s painterly look.

That’s according to Reddit user ReallyBigSandwich, who has presented their project with a showcase of image previews – and they look gorgeous. There are in-game shots of Skyrim’s wilderness overhauled with soft, pastel tones reminiscent of the Nintendo action-adventure game’s own, now iconic, art style. From snapshots of north Tamriel’s forests to its rivers, lakes, Whiterun planes, and its icy summits, the whole game looks transformed into a Zelda-like land.

There’s even a peek at what looks like a very familiar dwelling – the shack home to Skyrim dog Meeko (yes, the one I previously said I’d sacrifice hours of lost progress for) – and it looks idyllic. It even looks like its creatures are given a rework, with horkers and wolves somehow softened.

The project is based on the Artistic Skyrim Overhaul mod, the creator says, explaining that their reason for making it is that they “love Breath of the Wild” and are “tired of searching for 120+ different retextures, all with their own individual styles”.

According to them, the project is unfinished and, while they plan on finishing it, they’re keen to ask others to help them get it done. “There are a lot of textures that need to be redone as well as some landscape redrawing and a few other things that escape me at the moment,” they explain. “I can do this all on my own, but I would never actually finish.”

If you’re keen to find out more about the Breath of the Wildrim project, head over to the Reddit post. Meanwhile, you might also find our list of the best Skyrim mods handy if you’re keen to tinker with your game and are keen to see what’s out there.